Rachel’s note: Regular readers know getting in on an investment early is the key to making a fortune. But when it comes to investing in a company before it goes public… that’s easier said than done.

Because those opportunities have all but disappeared. Some of the best companies are now staying private for years. That leaves venture capitalists to soak up the best returns… while ordinary investors are left with table scraps.

Fortunately, our colleague over at Brownstone Research, Jeff Brown, decided to do something about it. He found a sector of the tech market where companies still go public early… at reasonable valuations.

The best part is, everyday folks can take part. And these tiny tech stocks have a unique feature that’s about to send them into overdrive…

On Thursday, March 18, at 8 p.m. ET, Jeff’s going on camera to reveal all the details behind them… and the best way you can profit. Just go right here to make sure you don’t miss it.

Some might be surprised to hear that, given the pandemic lockdowns, tumultuous elections, and other curveballs thrown in the last 12 months. But readers following my research know exactly what I mean. In each of my investment services, we saw incredibly strong performance in our portfolios in 2020.

And I expect when we look back at 2021, we will have had another great year.

But today, I want to discuss a key dynamic that we’re seeing in the markets right now… and a special opportunity for investors…

A Market on Fire

The IPO market has been on fire lately. In 2020, we saw 552 initial public offerings. And those IPOs raised more than $172 billion. 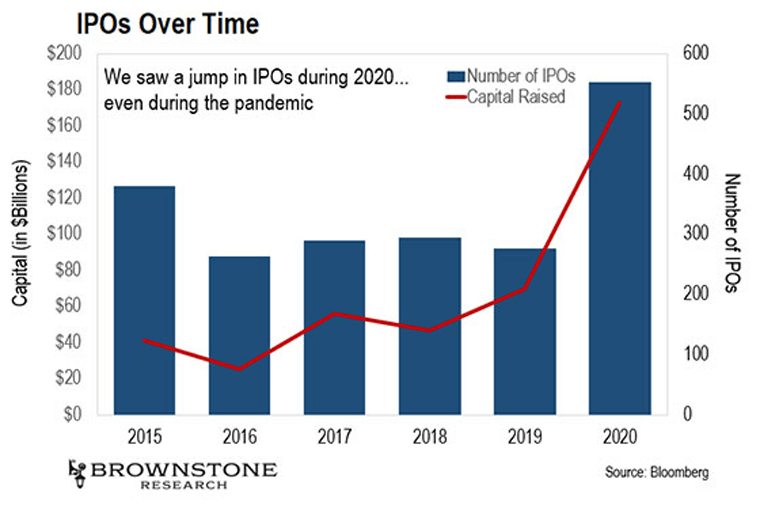 And I’m on record saying that the IPO market will be even bigger in 2021. In fact, we’ve already seen 276 IPOs raising over $85 billion at the time of writing.

Longtime readers know this, but there is actually an “IPO backlog” right now.

There are so many exciting technology companies that have been staying private for years and years. And this has created a backlog of companies that are now finally going public.

In essence, these companies are like a champagne bottle. All this pressure has been building for years. And now, finally, the cork has popped, and they are all lining up to go public.

What’s interesting is that a lot of these IPOs were put on hold with COVID-19 and the economic lockdowns. Then this wave of IPOs came back with a vengeance around last September.

Here’s an example to illustrate the problem we’re seeing.

On December 9, an artificial intelligence (AI) company called C3.ai held its IPO after being private for 11 years. The stock was officially priced at $42 a share, valuing the company at just over $4 billion.

But when shares began trading, the stock opened at well over $100… more than double the listing price. Investors never had a chance to invest at a reasonable valuation.

And sadly, that’s not the only time this has happened…

Also in December, an exciting biotech company called AbCellera held its IPO after being private for eight years, also around a $4 billion valuation.

And we saw the same thing…

AbCellera, which worked alongside Eli Lilly on its COVID-19 antibody therapy bamlanivimab, was priced at $20, but it opened at $58. That’s nearly three times higher. Again, regular investors had no window to get in at a good price.

And even larger IPOs aren’t immune to this issue.

Airbnb, the popular vacation rental company, finally held its long-awaited IPO on December 10 after being private for 12 years. The stock was priced at $68 per share – putting it at a valuation of $47 billion.

But once again, when it opened for trading, it was at $146. That’s more than double the listing price. Once more, regular investors had no shot to get in at a reasonable level.

I could go on and on with similar examples.

Compare this to a company like Amazon. Just three years after its founding, it went public in 1997 at a split-adjusted $1.54 per share… and a mere $438 million valuation. Investors who took a chance on it at the IPO and held on could have made as much as 180,000% on their investment in the time since.

But these days, it seems like this kind of opportunity has all but disappeared…

Where Have the Good Investments Gone?

Our opportunities to invest in promising early stage companies at reasonable valuations have almost vanished.

Companies are now staying private for years – many times over a decade – so that when they do go public, the biggest gains are already gone. Regular investors aren’t able to get in anywhere close to the valuations the venture capitalists (VCs) invested at.

Instead, we’re left with just the table scraps…

But I have good news. I’ve made it my mission for the past five-plus years to find ways for investors to level the playing field. And I’ve discovered a space where the big, VC-like gains still exist for retail investors…

There’s a small sector of the technology market where companies are still going public early in their development… and at reasonable valuations.

And these tiny tech stocks have a unique feature…

Thanks to the federal government, they have a preset “timer” attached to them. And when the timer hits zero, these stocks can see a sudden and massive spike in their share price. These stocks can rise hundreds or even thousands of percent in as little as a day.

That’s why I call them “timed stocks.”

And because of two seemingly unrelated forces converging right now… these stocks are entering a “final countdown” period.

And I want to make sure all of my readers are prepared to take advantage of this opportunity while it lasts. I’ll be hosting my Timed Stocks: Final Countdown event on Thursday, March 18, at 8 p.m. ET to show how anyone can get in on timed stocks right now.

I’ll also be sharing details about the top timed stock on my list right now. Its timer could go off as soon as March 24…

So if you’d like to learn more about timed stocks… and the best way to profit from them… make sure to go right here to reserve your spot at this event. You don’t want to miss out.

And I look forward to seeing you there!