It sounds like a pipe dream. But Oregon and Denver are considering decriminalizing psilocybin, the psychoactive compound in “magic mushrooms.”

Not only that, the Food and Drug Administration (FDA) recently designated “Breakthrough Therapy” status to a psilocybin-based drug designed to treat clinical depression.

In short, the chances of psilocybin becoming legal at some level just skyrocketed.

It’s hard to believe, even for a libertarian like myself. As for Casey Research founder Doug Casey? Well, he called the news “exciting” in a private email. So I got him on the phone to learn why…

Justin: Doug, you’ve been a critic of the drug war for decades now. But are you surprised by this news? After all, I think most people can agree that psilocybin is a far more powerful substance than marijuana…

Doug: I’m not sure powerful is the right word. The effects are just different, and the effects differ greatly with the amount you take. And even the environment you take them in.

The fact there’s been a world-wide, anti-drug hysteria for well over 50 years speaks very poorly of the average human in general, and Americans in particular.

Mind-altering substances have been part of the human experience since Day One. It’s only recently that the U.S., perhaps because of its puritanical roots, started criminalizing everything. It turned practices that were, at most, bad habits or nuisances, into major felonies.

We all read fairy tales when we were kids. You’d often see illustrations of mushrooms in these books, specifically the big red mushrooms with white spots on them. They’re called Amanita muscaria. They occurred in a lot of European fairy tales because people found the mushrooms could expand their consciousness.

Few people now know that there are a variety of psychedelic mushrooms, growing wild throughout most of the northern hemisphere. They can be found in the woods around Aspen, for instance. You can pick them, and dry them to increase their potency. If you eat one before bedtime it gives you a pleasant drowsiness – a good time to read a fairy tale that was likely composed under their influence. Eat three and you’ll feel sick. Eat a dozen and you may have a one-way trip to the hospital.

They’re interesting, just like scores of other plants commonly used in similar ways around the world for many thousands of years. Of course, there’s some risk to wandering in the woods and eating something that doesn’t come in a plastic wrapping. You need to know what you’re doing. That’s true of any plant, aside from the ones you’d find at your local Whole Foods.

But it’s insane for the busybodies who populate the U.S. government to put their fellow citizens – or subjects – in cages for decades because they want to imbibe certain plants.

It’s not a technical or health issue. It’s a moral issue. Who owns your body? You, or some bureaucrat?

Justin: What does the decision by the FDA say about the future of drug laws in the United States?

Doug: There’s no question that the cat is out of the bag now. And we’re headed toward more intelligent drug laws. Which is to say, hopefully, the legalization – or at least the decriminalization – of everything.

These fools learned absolutely nothing from the Prohibition of alcohol during the ’20s. Alcohol was no more of a problem then than it is today. The crime and the violence, and the rise of the Mafia, was strictly because booze was made illegal. It’s the same with drugs today.

Speaking of the FDA, it ought to be renamed the Federal Death Authority. It kills more people every year than the Defense Department kills in a typical decade. I understand that people like to feel protected, that something is out there taking the place of their mother. But at huge expense, it’s little more valuable in improving Food and Drugs than the TSA is in improving travel safety. They’re mainly theater. The FDA should be abolished. It serves no useful purpose that the market wouldn’t – except to artificially fatten the payrolls of big pharma.

The same is much more true of the Drug Enforcement Administration [DEA]. The DEA has done much more than its share to fill the prisons. Over half of the two million-plus prisoners in the U.S. are there on drug-related sentences. They’ve created a crimewave by making it so profitable to distribute these things illegally. Meanwhile, like all regulatory agencies, they’ve been captured by the industry they oversee. There’s no question many DEA agents retire as millionaires as a result.

What annoys me is not silly controversy about legalizing cannabis, psilocybin, LSD, MDMA [Ecstasy] and such. For that matter, there are hundreds of other artificially created psychedelic substances you can make at home. Look at some of Alexander Shulgin’s books, like Pihkal, Tikhal and The Shulgin Index, which give hundreds of formulae, processes, and effects of psychedelics you can make in any high school lab.

Unbeknownst to most Americans, what’s really dangerous are FDA-approved drugs like Xanax, Prozac, Ritalin, and scores of others. Almost all of the mass shootings of recent years have been by people either on them, or coming off them. I question whether that’s ever – ever – been true of even the most egregious abuser of cannabis.

Justin: You mean the basic questions of, “who owns your body? You or the state?”

Doug: Yes. I have had some experience with drugs. But generally don’t indulge, and I generally eschew the company of those who do. All too many drugs – absolutely including approved psychiatric drugs – only cloud the mind and limit your abilities. John Hunt and I go into this at length in our second novel, Drug Lord. Let me add in a commercial here. Both Drug Lord and Speculator are excellent Christmas presents, and signed copies are available at highgroundseries.com.

Absolutely anything can be a danger if you overdo it. That includes alcohol and tobacco, of course. It also applies to foods, especially sugar. In all things, it’s a question of moderation.

It’s now clear that cannabis, certainly CBD, can be quite beneficial as medicine. The same is true with psilocybin and LSD in micro-doses. These substances can clarify the mind. They speed up the reflexes. They have many salubrious benefits.

But like absolutely anything, taking too much of these substances is a bad thing. It’s a question of individual responsibility. It’s not a matter for regulation by the State.

Let me say something that, however logical, will shock many people: there shouldn’t be any laws for these substances. Before the Harrison Narcotics Tax Act was passed at the beginning of the 20th century there were no regulations – you could buy anything at the corner store – and there were only trivial problems. When you take responsibility from the individual and put it someplace else, the individual becomes irresponsible.

This is one major reason why the U.S. is on the ragged edge of collapse.

Justin: What do you mean exactly?

Doug: The average American now expects the State to kiss everything and make it better. They expect the State to determine what’s good or bad, what should be regulated and what shouldn’t.

Justin: Doug, Portugal decriminalized all drugs in 2001 because they had a national heroin epidemic, and the war on drugs was doing nothing to fix it.

And despite being controversial, Portugal’s drug reform has been a massive success.

Do you think the U.S. will ever do the same and decriminalize drugs across the board?

Doug: I certainly hope so.

The fact that nobody in the media or government mentions what happened in Portugal shows you how corrupt things are. After they decriminalized drugs, drug addiction levels and the second-order effects of drug addiction such as crime and unexpected death have plummeted. But Boobus americanus is entirely unaware of it.

Right now, there’s a hysteria around fentanyl, an artificial opiate, which is a couple hundred times more potent than heroin. And of course, the usual suspects want to crack down on it, and “do something.” It’s going to be hard to get even for medical purposes. They’ll counterproductively – idiotically – create a huge black market, to the immense profit of lawbreakers.

What business is it of yours or mine if people want to self-medicate with a drug that can be dangerous?

Frankly, if these deaths are accidental, it’s largely because the stuff is illegal, and those who take it can’t be sure what the proper doses are. So if you’re worried about the alleged 50,000 deaths, cracking down is the worst thing you can do.

But that’s not the point.

The point is that they own their bodies. It’s not anyone else’s business.

Most of the people taking these substances are lower middleclass white people that are depressed because they can see not just their standard of living going down, but their culture falling apart. Many perhaps just want to check out. And Fentanyl is an easy way for them to do it.

I feel sorry for them but frankly it’s none of anybody else’s business, certainly not the kind of people that populate the U.S. government and these drug agencies in particular.

The solution is to solve why they’re depressed. But that’s a subject for another conversation.

Justin’s note: As Doug mentioned, cannabis – cannabidiol (CBD) specifically – can be quite beneficial as medicine. I’ve written about this at length in previous essays, but if you’re not convinced, you need to check out our new video presentation here.

On top of all of the health benefits, you can also make money in the cannabis sector.

And now that President Trump has signed the Farm Bill, certain companies are set to explode higher. Watch this timely presentation – and see how you can start profiting – here.

Justin’s note: Today, we have a timely market update from Bonner & Partners’ head of research, Joe Withrow. With the markets falling, we wanted to get this to you as soon as possible. We also have a free report for you that you can download to protect yourself (and profit) in the months ahead, so make sure to read to the end…

Some of the largest U.S. companies in the S&P 500 are now in bear market territory…

Today’s chart maps the performance of eight of the largest U.S. stocks by market cap since hitting their 52-week highs earlier this year. 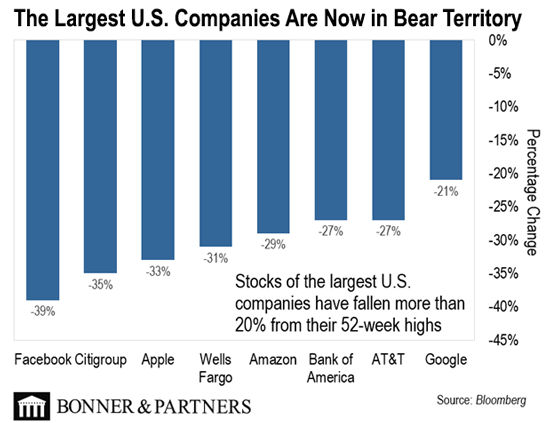 As you can see, Facebook, Citigroup, Apple, Wells Fargo, Amazon, Bank of America, AT&T, and Google are all in bear market territory, having fallen more than 20% from their 52-week highs.

Apple, Amazon, and Google are three of the four largest companies in the U.S., each with a market value of more than $700 billion.

And Facebook, Wells Fargo, Bank of America, and AT&T are four of the 25 largest U.S. companies, each with a market value greater than $200 billion.

In other words, the market generals are falling hard – an ominous sign.

The S&P 500 has not yet fallen into bear market territory – it is only down 16% from its September high. But with its largest constituents falling hard, it seems only a matter of time before the S&P crosses the dreaded 20% mark.

The good news is we can help you prepare for a crash. We’ve compiled the best advice from all the editors and analysts from across our business. These are some of the brightest minds on the planet – and every entry is timely and extremely valuable for what lies ahead.

It’s called the Ultimate Crisis Playbook. With 109 pages full of tactical steps from our gurus, this market crash guide is designed not just to help you protect your wealth in the months ahead… but also to prosper. Download yours for free here.

What did you think of today’s Conversations with Casey? Share your thoughts with us at [email protected].