Chris’ note: It looks like something out of a sci-fi novel… and it’s got everyone’s attention.

As you can see below, it’s not your typical truck: 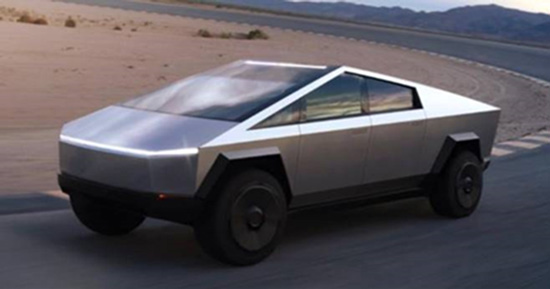 Now, if you didn’t already know, our founder Doug Casey is a life-long car guy. So I had to get his take on this new truck since it’s truly unlike anything we’ve ever seen.

Below, in a brand-new Conversations With Casey, Doug shares his thoughts…

It looks like something out of a sci-fi novel. What do you think of it? Is it a good idea?

Doug Casey, founder, Casey Research: This latest episode of Adventures with Elon, featuring his strange pickup truck, is most entertaining. Better yet, it’s sci-fi brought to the real world. Elon is like an animated version of Tom Swift Jr. – of whom I was a huge fan when I was a kid. And still am…

I’ve been a car guy my whole life. I’ve always owned, driven, raced and worked on high-performance cars. I know quite a bit about all aspects of them. Or I used to; the technology has changed to the extent that backyard mechanics are dinosaurs.

There’s no question in my mind that electronic and battery technology is going to kill the internal combustion engine for many reasons. Electronic cars are much faster, they handle better, they’re more efficient, and they have many, many fewer moving parts. They’re also potentially much more economical to both buy and run. As much as I love the internal combustion engine I’m a big believer in electric vehicles as the next stage of automotives.

Elon’s pickup truck is also a smart move commercially. His idea is to make the thing nearly indestructible with a shell of stainless steel, which won’t corrode or rust out, doesn’t need paint, and is very hard to damage. Truck buyers want tough vehicles, and this thing is super tough.

Chris: What did you make of the big unveiling of the truck? It seemed to be a total disaster. Elon said the “armor glass” windows were unbreakable. But when he went to prove it on stage, it didn’t go as planned…

Doug: It was a minor scandal when the designer of the vehicle threw a steel ball at the window and shattered it. That wasn’t supposed to happen. Or was it? It really surprises me that they didn’t test that before. These are engineers; they understand material science. Which makes me think that it was a PR stunt to direct more attention towards the truck than would otherwise have been the case.

Even if, against all odds, it was a mistake, it’s a very solvable problem. So I’m rather amused, but completely undisturbed by it. From what I’ve read about the vehicle – obviously, I haven’t even seen one so far – it looks like it’s a huge advance on all fronts. No doubt it will not only be a practical pickup truck, but one you can drive to a formal event at your country club.

The only question is how fast it catches on in the US. Pickup truck buyers are very culturally traditional, and this might be just a little bit too much for some of them. But if they like it, and I think they will, because it’s just mechanically better, they’ll jump on it. Tesla won’t be able to keep up with orders, at least for the $39,000 he’s projecting for a base model.

Furthermore, trucks are by far the highest margin part of the automotive industry. Manufacturers make much more money per vehicle with pickup trucks than anything else. It’s smart of Elon to get into the high margin part of the business.

Chris: What are your thoughts on Elon Musk in general?

Doug: I’m all for Elon Musk. I don’t approve of his having used the US government to finance so many of his enterprises, but he’s clearly a technological genius – one for the ages, on a par with Edison. And not just because of Tesla, but his Boring machine is visionary, his Space X is visionary. I’m a huge fan, and wish him well with all the success in the world. The world needs a million more Elons, who are rich and famous because of what they create. And a million less politicians – it’s an extremely long list – who are rich and famous.

I think he’ll be spectacularly successful – assuming the markets hold up. That’s the big caveat. Because as good as he is, I doubt he would’ve been able to raise all the money he has for these weird science ventures if we weren’t in a financial bubble, where there’s just so much artificial capital floating around that people will put hundreds of millions or billions of dollars into science projects. Science projects are notorious graveyards for capital.

If the markets collapse, a lot of Elon’s adventures will collapse because none of them are cashflow positive. As good as the technologies appear to be, the companies that own them could still go bust. In today’s world, advancing high technology is very capital intensive. At least when you’re playing with giant machines and factories like Elon is.

Chris: It’ll be interesting to see how it all plays out. Thanks for speaking with me today, as always.

Chris’ note: Changing gears, if you haven’t yet watched our 2020 Gold Spike Summit, I recommend you do so – and soon.

During this urgent briefing, Doug talks about one of the most important changes of the last 45 years to rules governing gold…

This rule change presents a once-in-a-generation money-making opportunity for those willing to act now. In fact, if you follow this secret, it could make you 10 times, 20 times, even 50 times more as the price of gold continues to rise. But fair warning: This situation is unfolding quickly. You don’t want to wait around.

Go here now to get the full story from Doug himself…

And speaking of gold… be on the lookout for a special series in the Dispatch next week. Our gurus will share their top reasons why gold will soar in 2020… and how you can take advantage.