Editor’s note: Regular Dispatch readers know we see more volatility ahead before this crisis is over. And that makes plenty of investors wary of the stock market right now.

But there is one event we can predict with absolute certainty – and it’s set to take place in the crypto market in the coming days. In fact, according to our colleague and crypto expert, Teeka Tiwari, this event has happened before… and the last time it did, it minted new millionaires.

Teeka’s consistently called moves in the crypto space, including huge rallies in 2019 and 2020. And his readers have seen a 1,000% total gain on his last five coin recommendations. Tonight, at 8 p.m. ET, he’s holding a special presentation where he’ll reveal how a tiny stake could make you millions… and why now’s the time to take action, before it’s too late. You can sign up for this free event by going here.

Then, read below for Teeka’s insights on the two forces that will create a massive demand in crypto… and why this is just the beginning…

Most of the time, I shy away from talking about stock market timing.

The explosion of computerized trading has made market timing progressively harder.

Even Bridgewater Associates, the world’s largest hedge fund, got its timing wrong during the March decline. Forbes reported it lost 16% across its main fund in March.

So while stock market timing has become more difficult, there’s one market where the computers haven’t taken over yet.

I’m talking about the crypto market. This is a market where I have consistently (although not always) been able to call with startling accuracy.

So when I reopened membership to my flagship crypto service, Palm Beach Confidential, back on March 18, I was guided by my research that told me prices were about to boom higher.

Many thought this was an odd decision. At the time, both stocks and crypto prices were crashing.

The most common question I got from prospective new subscribers was, “Why would you open membership now,with the crypto market down so much? Wouldn’t it be smarter to wait until crypto investor sentiment was high?”

The answer I gave them was timing…

You see, when I open my doors to new members, I make the boldest guarantee in the newsletter business. I guarantee a 1,000% cumulative return in the first year. And to make and meet that type of guarantee, I have to get the timing right.

That’s why nearly every time I’ve opened Palm Beach Confidential to new members, the entire crypto market was getting devastated.

But guess what? It ended up being perfect for new members.

Again and again, I’ve refused to open my doors to new members during the boom times… even though I would have sold more newsletter subscriptions.

Longtime readers already know selling the most subscriptions has never been my goal.

My primary focus is to help as many people as I can vastly improve their financial lives without putting their current lifestyle at risk.

According to testimonials from thousands of satisfied subscribers who have saved their retirement accounts… paid for vacation homes… and funded their children’s education with the gains I’ve helped them make, I’m doing a pretty good job so far.

Where We Are Now

Unlike six weeks ago, today’s world looks quite different. The stock market has recovered as much as 22% of its losses and crypto prices have soared higher.

Since reopening Palm Beach Confidential on March 18, bitcoin has risen as much as 86% and my five most recent recommendations have been up an average of as much as 455%. With gains that large, it’s easy to think the opportunity in crypto is over.

And in today’s essay, I want to show you why I’m reopening membership for a very limited time. And why I’m still offering my 1,000% guarantee.

First, I need to explain the opportunity emerging in crypto.

Every four years, two forces come together that shoot a handful of crypto coins into the stratosphere.

Along the way, they make a few early crypto investors multimillionaires.

I call this event “The Phenomenon.”

The first of these twin forces is called the “halving.” This is when the new supply of bitcoin is cut in half.

Like I mentioned, it happens every four years. And I can tell you it’s 100% guaranteed to happen again – regardless of what’s going on in the crypto and stock markets.

Five hundred dollars into each of these coins would have been worth as much as $2 million, $2.7 million, and $5 million, respectively.

Bitcoin is the gateway to crypto. Think of it as the reserve currency of the crypto world. So if demand stays the same, but supply gets cut in half, what happens to the price?

But it’s nothing compared to what happened with altcoins (an altcoin is any crypto other than bitcoin)… They went up 5.5 times more… 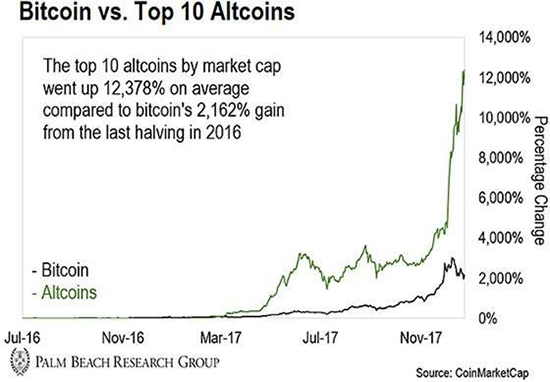 But cutting the supply of bitcoin is not enough to turn a few $500 investments into a multimillion-dollar fortune.

You need the second force: Massive, sustained, record-high demand. And as I’ve predicted, we’re seeing that ramp up as well…

Just two weeks ago, the Securities and Exchange Commission allowed $130 billion hedge fund Renaissance Technologies to get involved in bitcoin.

RenTech’s Jim Simons is the highest-earning hedge fund manager in the world, according to Forbes. And his Medallion Fund is famous for achieving the best continuous returns in history. Between 1994 and 2014, it generated average returns of above 71.8%.

And another major player just came into crypto: Marc Andreessen. He cofounded Andreessen Horowitz, a top Silicon Valley venture capitalist (VC) firm. And days ago, we learned his firm is shifting $515 million into crypto.

So what you’re seeing is the top hedge fund and top VC firm get into crypto right before The Phenomenon takes off. As I always say, follow the smart money…

And this is all just the tip of the iceberg…

We’re on the verge of 500 million stock investors being able to buy crypto with just one click of their mouse. I believe this huge influx of demand will ignite the prices of a handful of coins to levels we’ve never seen before.

Even though we have already seen large gains, in my experience, this is just the opening prelude to truly gargantuan gains.

My point is, if you’re on the sidelines because you think it’s too late to get into crypto, you’re 100% wrong. It’s a mistake that will haunt you for your entire life.

That’s why I’ve agreed to give a special presentation tonight at 8 p.m. ET, so I can show you why you must take action now or forever be locked out of the crypto market.

Once the market really takes off, it will be too late. But there is still time. So come join me tonight at 8 p.m. It’s free to attend and what you learn just might change your financial life forever.

I will show you why, for the very last time, you have a chance to transform a handful of $500 investments into as much as $5 million.

P.S. I’ll also be holding a Q&A after my presentation tonight (no personalized investment advice). And I’m giving out a free bonus gift to all those who RSVP. You can learn how to claim it right here…