Rachel’s note: By now, you’ve felt the effects of inflation on your wallet.

Everything from gas, groceries, and technology products is getting significantly more expensive.

So as investors, how do you protect yourselves from this environment?

And on Wednesday, April 6 at 8 p.m. ET, he is hosting a special briefing to show you how to create generational wealth using one inflation-proof, recession-proof, and crash-proof strategy.

Sign up to reserve your spot here. Then, read on for more details about how to combat higher prices…

This move converted the U.S. dollar from an asset-backed currency into fiat currency – money issued by decree.

U.S. dollars could be created out of thin air at will. There were no more restrictions on how many dollars could exist in the economy.

And while inflation was mild for a number of years, we’re now seeing it pick up again. In February this year, the Consumer Price Index increased 7.9% compared to the same month a year ago.

In other words, gas, groceries, and nearly everything in between are getting significantly more expensive.

And it’s all thanks to an absolute wall of money printing. 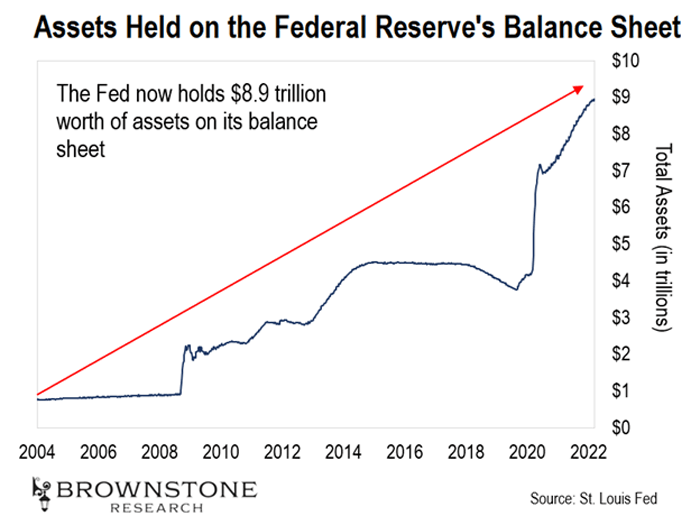 The Federal Reserve’s balance sheet reached $8.9 trillion over the course of the COVID pandemic. When this line goes up, that means the Fed was creating new dollars out of thin air.

We have never seen anything like this extreme level of money printing before in the U.S. These policies will have drastic consequences.

That’s because inflation acts as a “stealth tax.” When our dollars are debased, the value of our savings deteriorates. Our buying power slowly shrinks.

And because we get virtually no return on our cash at present due to these artificially low-interest rates – whether it’s sitting in a bank or hidden under a mattress – we’re forced to seek other ways of earning to combat inflation.

So as investors, how can we protect ourselves in an inflationary environment?

I believed that once, too.

The Obama administration printed $10 trillion over eight years. That sum was a larger amount than every single presidential administration combined… in history.

And during that time, I was heavily invested in gold.

I invested in gold miners, gold indices, private placements in junior mining and exploration companies, and even some successful short-term gold trades. I remember making 678% in under a month with a well-timed options trade on the Gold & Silver Index (XAU).

I also bought physical precious metals. I remember carrying a monster box of 500 ounces of silver bullion through airport security in Japan.

The Japanese security was very confused. What was I doing with all these coins? I told them I was a collector, and they let me go on my way.

So why would I – a technologist – invest in gold?

Simple: I knew it was heading higher.

Then, in the aftermath of the Great Financial Crisis, the Fed slashed the federal funds rate close to zero. Again, yields on income-producing assets fell.

Low rates tend to be bullish for precious metals. Investors often buy gold when yields on income-producing assets like bonds drop to the level of inflation.

At the same time, the government launched a series of money printing programs. In late 2008, President George W. Bush signed into law the $700 billion Emergency Economic Stabilization Act (EESA). This legislation “bailed out the banks” with the Troubled Assets Relief Program (TARP).

Then, in 2009, President Obama signed the $787 billion American Recovery and Reinvestment Act. It expanded the federal deficit by hundreds of billions of dollars.

And it happened four years in a row.

This unprecedented level of federal debt, along with low rates, were incredible catalysts for gold.

When I first started investing in precious metals, gold traded for about $400 an ounce. By 2011, gold would sell for more than $1,800 an ounce. At the time, it was at an all-time high.

I’m happy to say that I did very well with my investment in gold. But starting around 2014, I began selling almost all of my precious metal assets.

In fact, I’ve since sold every single gold investment I had. I held on to my silver monster boxes, but I don’t own a single ounce of gold today.

After $10 trillion of printing by the end of President Obama’s administration, gold was only up about 40%, around $1,200 an ounce. And that sent me a clear signal.

That told me gold wasn’t going to reach $10,000 an ounce. If trillions in money printing didn’t do it, nothing would.

Now, it’s entirely a personal decision if an investor wants to own gold. But I won’t be recommending it in the pages of my research products.

Instead, we’ll beat inflation another way.

The key is for us to be invested in sectors and companies that are growing far faster than the rate of inflation. That way, we can still significantly outperform the markets and generate substantial real returns.

But that begs an obvious question. Where do we look?

Right now, I’m very interested in an asset class that can deliver market-beating returns in the years ahead. Not only that, but it’s recession-proof and crash-proof.

On Wednesday, April 6, at 8 p.m. ET, I’ll tell you all about how this unique asset class is paving the way for incredible profits that will more than beat inflation… It’ll beat every other asset class this year.

I look forward to seeing you on April 6.