Editor’s note: If you’ve been following along in the Dispatch, you know our founder, Doug Casey, sees bitcoin as a way to strengthen your portfolio without increasing risk.

And according to Casey Research friend and crypto expert Teeka Tiwari, a rare opportunity for everyday investors to see massive gains from bitcoin is just around the corner. And you don’t want to miss out.

But there’s plenty of opportunity in the entire crypto space. In fact, Teeka’s uncovered a way you can turn a small stake into millions… using just five little-known coins besides bitcoin. He’s revealing all the details during his free presentation Wednesday, March 18. You can learn how to sign up by going right here.

Then, read on to learn why bitcoin’s next bull run is on the horizon… and how you can set yourself up to profit.

It’s one of the most bullish chart indicators in technical analysis… And right now, it’s setting up a rare opportunity for life-changing gains in the crypto space.

The last five times this indicator flashed for bitcoin… crypto investors could have made average gains of 3,123%.

But it wasn’t a straight line. On average, every time this indicator flashed, bitcoin first dropped 23% before it soared higher.

I’m writing to you today, because bitcoin just entered the dip phase after triggering this buy signal…

The indicator I’m talking about is the “golden cross.”

In the past, golden crosses have triggered major runs in other assets.

For instance, gold is up nearly 30% since its golden cross in early 2019. The Nasdaq experienced a similar run since its cross went bullish in March 2019.

Over the past eight years, bitcoin has had only five golden crosses.

Here is the key to profiting from this action in bitcoin: Each and every time, bitcoin has dipped lower after the golden cross. It’s by buying during this dip when you can make a killing.

If you’d bought bitcoin right after each dip, you could have made an average of 32 times your money… in just a little over 12 months.

Check out the table below:

Here’s why I’m telling you this now… 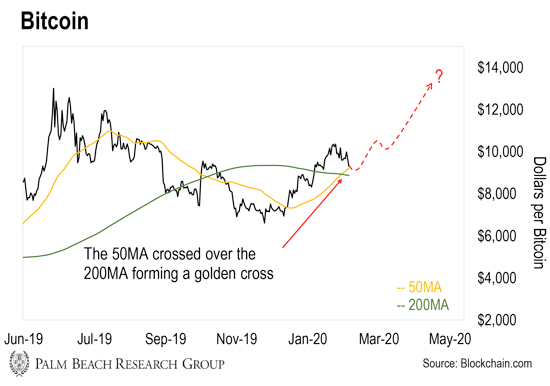 The cross by itself is bullish for bitcoin… But it’s buying the post-cross dip where you’ll make the real money.

This post-golden cross dip is meeting another catalyst that could catapult bitcoin prices significantly higher from here.

The second catalyst working in bitcoin’s favor is the bitcoin halving. And it’s triggered some of the biggest runs in crypto’s history.

The halving is when the bitcoin code reduces incoming supply by half. It occurs every four years. And the next one is in May… just two months from now.

A golden cross has preceded the last two halvings. And each time, the profits were jaw-dropping. 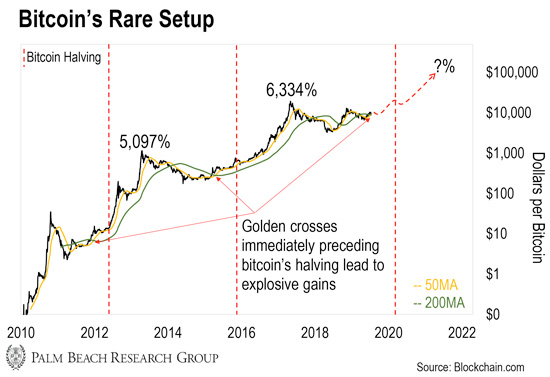 This time, we think prices could rise even more…

You see, this extremely rare setup is occurring right as institutional demand is picking up.

For example, bitcoin futures volume on Bakkt and CME is at record highs… Meanwhile, brokerages like Fidelity and TD Ameritrade are rolling out crypto services to their clients.

And this is just the beginning…

Friends, we’ve never seen a trifecta like this before in the crypto space: Decreasing supply and increasing demand… combined with a bullish price indicator.

And it may never happen again…

Remember, the next halving is in May. So you don’t have much time to act. And if you’re looking for some broad exposure, consider a small stake in bitcoin.

But the biggest gains – the kind that could potentially turn a few hundred dollars into a million – will come from another area of the crypto sphere.

You see, for the past six months, I’ve been on a world tour, interviewing my network of crypto insiders and billionaires to uncover “The Final Five.”

These are the last five tiny cryptos that this rare phenomenon will send soaring so high… $500 stakes in each could mint new crypto millionaires.

To prove it, I’m doing something never been done before in the history of our industry. I’ve chartered a private jet and taken strict precautions to keep its destination secret.

And on Wednesday, March 18, I’ll take you along to the hidden epicenter of this millionaire-making phenomenon during a special event from inside my private jet.

Once I reveal the location, you’ll see with your own eyes why it’s guaranteed to transform the crypto market… and how it can potentially make you an absolute fortune in the process.