Justin’s note: Today, we turn to Casey Report chief analyst Nick Giambruno, who shares what could be in store for America in the coming weeks. As you’ll see, there are clear indicators of a crisis… in the auto sector… the housing sector… and in the economy as a whole.

And he says now’s the time to prepare…

There wasn’t a group of people more wrong about the 2008 financial crisis than those at the Federal Reserve.

Mere months before the disaster hit in earnest, the nation’s highest economic and financial officials were vocal that there was nothing to worry about.

In January 2008, he said, “The Federal Reserve is not currently forecasting a recession.”

And later that year, in July, he said Fannie Mae and Freddie Mac – the two government-sponsored enterprises that kicked off the credit crisis a few months later – were “in no danger of failing.”

And it wasn’t just Bernanke. The same delusional sentiment was echoed by almost all the top Fed and Treasury officials… as well as those in the mainstream financial media and academia.

Of course, we all know how things played out…

When the housing bubble burst in 2008, the effects rippled throughout the economy, kicking off the largest financial and economic crisis since the Great Depression.

The reason I’m telling you this today is to remind you that people exhibit laughable sentiments near the peak of bull markets.

And today, we’re hearing much of the same sentiment that was displayed before the 2008 crisis.

But as you’ll see below, it’s not the only sign I’m seeing of a coming crisis…

I’ve written before about why I believe we’re near the peak of the largest bubble in human history.

And as I’m about to show you, there are clear indicators of a coming crisis… in the auto sector… the housing sector… and in the economy as a whole.

Despite this, Fed Chairman Jerome Powell recently said, “I don’t see a recession [in 2019].” And when asked if the bull market can go on indefinitely, he said:

Not every business cycle is going to last forever, but no reason to believe this cycle can’t go on for quite some time, effectively indefinitely.

We don’t see the kind of buildup in risks in the financial markets, let alone the banking system.

That echoed Powell’s predecessor, Janet Yellen, who said this in 2017 when asked about the next financial crisis:

Would I say there will never, ever be another financial crisis? You know probably that would be going too far, but I do think we’re much safer and I hope that it will not be in our lifetimes and I don’t believe it will be.

But there are a few reasons why I’m not convinced…

Despite all this bullish talk, the Fed recently did a 180 on its tightening of monetary policy.

If you remember, the Fed has been steadily raising rates since December 2015. It raised them four times in 2018 alone… and in December last year, it claimed it would raise them twice in 2019.

Here’s why this about-face matters…

Interest rates are barely coming off the lowest levels they’ve been in all of human history.

The Fed artificially brought rates down to 0% after the 2008 crisis and kept them there for over six years. You can see this in the next chart: 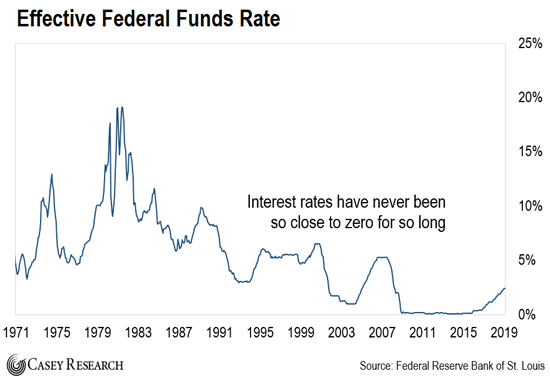 The Fed also announced it would phase out its balance sheet reduction program in the fall.

You might recall that the Fed created $3.7 trillion out of thin air in the wake of the 2008 crisis, under its money-printing programs euphemistically known as quantitative easing, or QE. That money was used to buy bonds, which sit on the Fed’s bloated balance sheet.

Now, some people think the Fed saved the day by pushing pause on its rate hikes. After all, it claims it’s doing this as a precaution “in light of global economic and financial developments.”

In fact, this whole charade proves to me that a crash is already underway – as the Fed inadvertently admitted we’re on the cusp of big problems.

After all, why would the Fed stop tightening monetary policy if it thinks there’s no chance of a recession?

Something doesn’t add up. And at the core of this charade is the fact that the U.S. economy is hooked on artificially low interest rates.

You see, the damage from the previous rate hikes and balance sheet reduction is already done.

For one, the cost to service debt has gone up across the board. And that could be fatal for many companies and entire industries that have grown dependent on artificially low rates.

After nearly six years of 0% interest rates, the U.S. economy is hooked on easy money.

It can’t even tolerate a modest reduction in the Fed’s balance sheet and 2.25% interest rates, which are still far below historical averages.

And we’re already seeing this take its toll in industries most dependent on easy money and 0% interest rates – the housing and auto markets.

For example, single-family new-home groundbreakings recently plummeted to a four-year low. That’s lower than what analysts had expected.

Then there’s the fact that housing sales are contracting in ways not seen since the last crisis.

And John Williams, the president and CEO of the New York Fed, says we’re seeing signs of a construction slowdown. The culprits, he says, are “constrained financial conditions.”

This might be the closest we get to the Fed admitting that the modest rise in interest rates is hurting the housing market.

But we don’t need the Fed to admit anything. We can already see this weakness in homebuilding stocks.

Take the SPDR S&P Homebuilders ETF (XHB), for example. This fund tracks the performance of companies with exposure to homebuilding activity.

Before the Fed announced its pause, XHB had collapsed over 33% from its peak last year. Today, it’s still down over 13%.

And like I mentioned earlier, the car market is also getting hit.

Auto sales in the first quarter of 2019 are off to their slowest start in six years. And they’re expected to be 4.9% lower than a year ago.

At the same time financing costs are surging, overall car prices are hitting record highs. And in February, auto loans were the most expensive they’ve been over the past 10 years.

The point of all this is that, in the weeks ahead, we will see shockwaves spread out, not only through the car and housing industries, but the economy overall.

That’s why now is a good time to take a close look at your portfolio.

Look at every position you own, and ask yourself: Would I be comfortable holding this through a recession… or even a crisis?

If the answer is no, consider lightening up on those weaker positions.

This way, you won’t have to worry about losing all your wealth in the recession I see coming.

Justin’s note: Nick sees another type of crisis coming… one that every Dispatch reader needs to be aware of.

He says a major coup is about to unfold on U.S. soil… And almost nothing can stop it.

Deeply connected and powerful cartels within Washington, New York, and Silicon Valley… who have major influence on financial and political policies… have finally crafted a foolproof conspiracy to sabotage Donald Trump’s presidency…

And replace it with a new type of “socialist state.”

It will be a new kind of America, with a new vision and new policies… But there are steps you absolutely need to take to prepare today. Nick just released an urgent presentation with all the details. Go here to view it now.

Are you preparing for what Nick sees ahead? Is your portfolio built to survive a crisis? Tell us at [email protected].

He unveiled his own breakthrough trading system, which can spot the market’s fastest-growing stocks up to 30 days in advance. (In fact, it’s already identified a small tech company in the 5G space that could be a triple-digit winner in just a few months.)

If you want to see potential returns as high as $9,385 in one trading day, there’s still time to get access to his trading system. But act fast… this is for a limited time only. 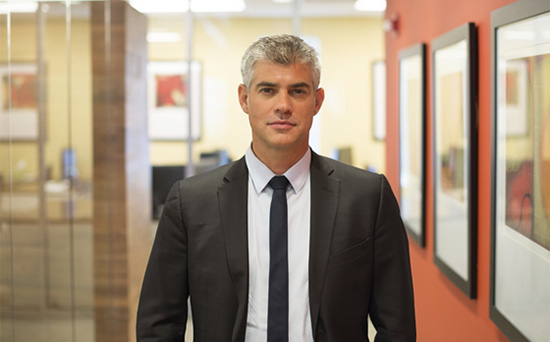