Editor’s note: Here at the Dispatch, we’ve kept you updated on all the unfolding trends surrounding COVID-19 – that you won’t hear in the mainstream.

That’s why today, we wanted to share this piece from our colleague, Jeff Brown. Jeff’s devoted his career to bringing the biggest advancements in tech to his readers. He’s also been following the pandemic for months – and sees a new trend as a result of the panic.

Regular readers know we believe it’s only a matter of time before the U.S. dollar goes digital. And Jeff says the coronavirus is accelerating this trend… but one key competitor will cause a major showdown…

COVID-19 will change our way of life for good…

Many of us have been working remotely, wearing masks when we go out, and paying for grocery delivery services.

And we’ve been staying connected with loved ones using videoconferencing programs like Zoom.

By this time next year, I believe the virus will be in the rearview mirror.

But we’ve learned many valuable lessons during this crisis. And these will continue to impact the way we live long after the pandemic ends.

Videoconferencing is here to stay. So are grocery deliveries. And as I’ll show you today, there’s at least one more area of our lives that will permanently change…

People don’t want to handle banknotes and coins that may have come into contact with someone with COVID-19.

Some businesses have refused cash payments due to fear of the virus.

The Fed – America’s central bank – even began quarantining U.S. dollar bills returning from Europe and Asia. It took the cash out of circulation for up to 10 days to ensure it wasn’t spreading COVID-19.

This has all been a boon for person-to-person payment transfers.

App-based payments cut out the middleman. Square’s app allows folks to send money directly to each other by hitting a button on their smartphones. 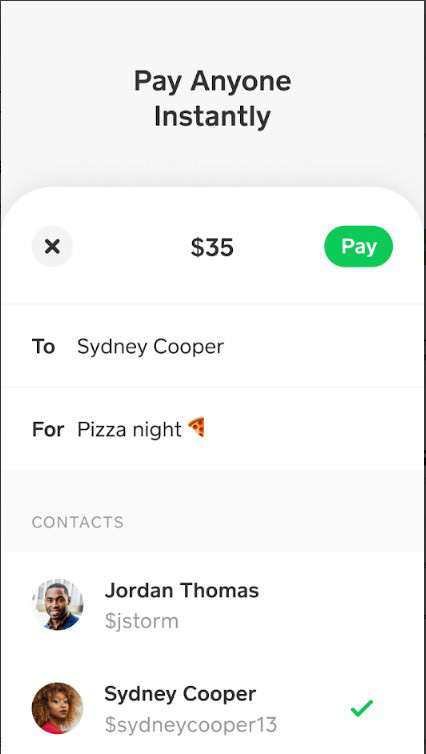 Square said it’s seen a spike in direct deposits into the Cash App, too.

Folks are depositing their paychecks into the app rather than their bank accounts.

If you can save, invest, and buy stuff through the Cash App, what’s the point of having a bank account?

You can even buy stocks through the Cash App.

But it won’t be just how we spend money that will change. Money as we know it is about to undergo a major transition.

Lawmakers scrapped the idea in the final bill. But make no mistake – a digital U.S. dollar is coming.

Last November, the Fed wrote an open letter to policymakers. Chairman Jerome Powell said the central bank was “[analyzing] the costs and benefits of pursuing a [digital currency] in the U.S.”

And that was before the outbreak of COVID-19 in the U.S. The benefits of such a program are now clear to policymakers.

Many people who hadn’t set up direct deposit to their bank accounts had to wait weeks for their physical stimulus checks. With a digital dollar, the government could directly deposit stimulus checks into our digital wallets.

The same goes for small businesses that applied for Paycheck Protection Program (PPP) loans. No more waiting weeks as the funds go from the Treasury Department… to the bank headquarters… to the local bank where the loan originated… to the business owner.

Instead, the feds could deposit the funds directly into digital wallets they assign to these businesses.

Policymakers are already aware of this idea. There’s no doubt in my mind that digital currency is the future.

Major corporations are already gearing up for this shift…

Visa is the largest credit card company and payment network in the world. It recently filed a patent for a digital currency system.

It envisions a world where physical money is no longer in circulation. Instead, a central computer manages the supply of new digital currencies. It also manages all transactions.

But before cryptocurrency enthusiasts start celebrating, know one thing. These state-issued currencies will be different from cryptocurrencies such as bitcoin.

Bitcoin vs. the U.S. Digital Dollar

Visa’s approach is the exact opposite of what the blockchain industry wants.

Blockchains are the distributed digital ledgers that record cryptocurrency transactions. They were designed for decentralized use. That means no one party has control. And a set of mathematical rules, not a central bank, determines monetary supply.

Visa’s patent, by contrast, outlines a permissioned, centralized system. This will keep the powers that be in full control of money.

We can bet this will be well-received by governments and central banks. It will allow them to track and tax every single transaction. The IRS will have a heyday.

This sort of system is already live in China. The state-owned Agricultural Bank of China just released a test app for smartphones for the country’s digital currency project.

And China’s central bank, the People’s Bank of China, is already testing its new purely digital version of the renminbi, China’s national currency.

The app handles all transactions. It also has a built-in digital currency exchange. It’s everything citizens need to earn, save, and spend in the country’s new digital currency. I predict that China will release the official version before the year is out.

If it’s successful, the U.S. won’t be far behind with a purely digital version of the dollar.

Removing banknotes from circulation will force us to transact on a single platform, using only a digital version of the U.S. dollar.

Don’t be surprised when you walk into a store and see a sign: “We accept bitcoin or U.S. e-dollars.”

It’s already started. There’s no way to put the genie back in the bottle.

P.S. Digital currencies are coming whether we like it or not… But 99% of investors are so distracted by bitcoin that they are missing the bigger picture. You don’t have to be one of them.

I’ve uncovered a way to profit from the blockchain megatrend without ever downloading a digital wallet or logging on to a cryptocurrency exchange. Go here to see how.