Rachel’s note: Today, we’re bringing you the second part of the conversation between Casey Report chief analyst Nick Giambruno and his friend and colleague, Chris Lowe. (You can catch up on the first part here.)

Nick believes a digital currency is inevitable. It’ll allow governments to track your every move… and have control over your bank accounts.

But there’s one digital asset that nobody can control… not even the government: bitcoin.

Below, Nick explains why the government will never be able to compete with bitcoin… and how high it could really go…

Chris Lowe: Hey, Nick. Today, I want to get right to bitcoin, because that’s another of your recommendations in The Casey Report.

As we speak, bitcoin is up 112% since you recommended it in June 2018. That’s a heck of a lot more than the U.S. dollar, or other fiat currencies.

Gold is a physical thing. So a lot of people think of it as the hardest money in the world.

But you’ve been making the case that bitcoin is actually a “harder” form of money than gold. And perhaps because of that, an even better store of value.

I wonder if you could unpack that for people. People may get confused and think, “How can bitcoin be hard money? It’s digital. It’s not physical.”

Could you explain why you’re so bullish on bitcoin? Why not just go all-in on gold? Why have bitcoin in the portfolio at all?

It means hard to produce. That’s the proper use of the word, in the context of a hard asset.

How does that relate to bitcoin?

Bitcoin is hard to produce. The thing you’ve got to understand about how bitcoin works is that its rate of inflation is constantly decreasing. And there’s nothing anybody can do to change the predefined schedule.

About every four years, the supply growth gets cut in half.

Look at gold, for example. The rate of increase in the supply of gold is about 1.7% per year. Bitcoin is right around there too. But the supply of bitcoin gets cut in half every four years.

Here’s an easier way to think of the halving…

There’s a euphemism that central bankers use for printing money. They call it “quantitative easing.”

Well, here’s something that’s not a euphemism – bitcoin’s halvings are quantitative hardening.

Whereas fiat currency is becoming easier and easier, bitcoin is becoming harder and harder.

And the bottom line with bitcoin is that it is the only crypto that isn’t controlled by anybody. All the other cryptos can be controlled by insiders… development teams… founders…

None of the other cryptos have a credible monetary policy like bitcoin because their rules – including the supply growth – are subject to change, and bitcoin’s is not.

That’s the whole value proposition of bitcoin… No group of insiders can get together and alter the bitcoin protocol, inflate the money supply, change the rules, and so forth.

Nobody can control it.

So bitcoin has an extremely desirable monetary property that no other crypto has.

That being said, bitcoin is an entirely new phenomenon, and an entirely new asset class. It doesn’t fit into the mental framework that most people have when they analyze investments and money.

Bitcoin is an incipient store of value – an emerging money – so there’s much more upside to it as more people adopt it as a way to store and transfer value. I think bitcoin definitely deserves a place in everybody’s portfolio as part of a cash mix.

Just like gold should be considered cash – not this fiat garbage that government’s give you, this confetti that the central bankers print and shower over their cronies.

That’s where bitcoin fits into it. We could talk about bitcoin all afternoon, but I tried to make it as concise as possible.

Chris: You’ve traveled the world. You also run an advisory called Crisis Investing. Your aim there is to profit in places where crises have knocked prices down to extremely low levels, with huge upside.

One of the trips you took – which I found fascinating – was to Zimbabwe.

Zimbabwe suffered a terrible hyperinflation of the currency there, the Zimbabwe dollar.

Along with Casey Research founder Doug Casey, you met up with Gideon Gono, who ran the central bank of Zimbabwe when this was happening. 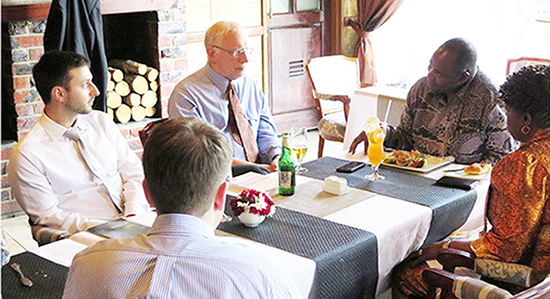 So do you have any insights?

What did you pick up from the experience of meeting one of the few central bankers in the world who has presided over one of these horrible hyperinflations?

Was there any insight you picked up psychologically from how these things happen?

It’s not as if he didn’t know that printing money was going to cause a hyperinflation. He can put two and two together.

When governments have the power to print money, they’re going to exercise it. In Gideon’s case, he mentioned that there was pressure from the army and the military.

You don’t say no to people with guns when they tell you to do something – unless you have a death wish.

That’s why central banks shouldn’t exist. People don’t realize that central banking is not that old, in the grand scheme of things.

It doesn’t add any value to society. All it does is redistribute wealth towards insiders and connected political hacks. It’s completely toxic and should be abolished.

The case of Zimbabwe is an excellent illustration of that.

Are they going to not print money? Of course, they’re going to print money. It’s the easy option.

Zimbabwe is a preview of things to come. Exactly the same thing can, and will, happen in any country.

And in fact, you’ve been covering a very interesting story, which is how central bankers around the world are getting ready for the digital age.

You and Doug have been talking about a phenomenon called FedCoin. Instead of printing physical dollars, as central banks do now, there will be a digital-only version of the dollar.

In other words, cash will go away. There will be a new coin issued by the Federal Reserve. A bit like bitcoin, it will have no physical form. It will only exist digitally.

And it seems to me that that is only going to make digital money-printing even more rampant.

One thing that came up when the pandemic relief checks were being mailed out is that a lot of people had to wait a long time. It was a bit messy.

It seems that central bankers are now saying, “Why don’t we just create a digital currency? Something like bitcoin, but that we control. Then we can drop it straight into people’s digital wallets.”

So what’s going on there, and how does it affect your view of gold and bitcoin?

Some people worry that a FedCoin would damage bitcoin, because now, you can just have this digital-only dollar.

Can you unpack where you see things going if we do get some form of FedCoin in the U.S. and elsewhere?

Nick: You’re right. This is old wine in new bottles. It’s the same money-printing scam with a new tool for it.

All it’s going to do is give governments a new way to inflate the currency even more – and redistribute wealth to people they want to.

I think they’ll actually be a Trojan Horse for bitcoin. That’s because they’ll get more people involved in dealing with digital currencies.

And that will naturally lead them to the hardest and the soundest digital currency… which is bitcoin.

So I think this is going to be a catastrophe for them. They’re thinking they’ll be able to compete with bitcoin, but they won’t be able to.

And they won’t be able to shut it down or ban it.

First of all, they can’t shut bitcoin down. No government can shut it down. Unless the whole internet goes down for the whole world, everywhere, simultaneously, they are not going to be able to shut it down.

And second, they could ban it, sure. They could prohibit it. But is that going to work?

They tried to prohibit cannabis. Look how successful cannabis prohibition was. It was a total failure.

Trying to prohibit something that’s digital and borderless is completely impractical. I’d actually like to see them try, because they’ll fall flat on their face.

The bottom line with the FedCoin is yes, it’s going to be used for bad things. And it is coming. China’s making its own digital yuan. All these other central banks are. It’s the latest gimmick.

But if you’ve been reading some of my work, hopefully you’ll have a better understanding of money. And you’re not going to be hoodwinked by these fraudsters when they roll out their next scheme.

Chris: Just to wrap up then… I’m understanding from you that there are two, or maybe three, elements to this.

One – there’s the gold stocks and the silver stocks. They’re ways that you can make big returns in your portfolio. They’re speculations.

And then, you’re saying that physical gold and bitcoin should be part of your cash allocation in your portfolio. Am I getting that right?

Nick: The cash allocation can be broken down into multiple parts.

Cash for long-term savings, which should come in the form of physical gold in your control and, to a lesser extent, bitcoin.

And then, you have day-to-day cash expenses. So you might as well spend your fiat central bank confetti for your day-to-day expenses and pass the hot potato on to someone else.

Chris: And a final question, Nick. I know you worked out in one of your research reports how high the bitcoin price could go if it became as widely held as gold.

Could you maybe remind people how that worked out? I find it startling, the kind of price target you get for bitcoin if you make that calculation.

If you look at the market cap of all the fiat currencies in the entire world, it’s around $39 trillion.

So if bitcoin gobbles up all of the use case that fiat money has right now in the world, in today’s terms, that would give you a price of $1.9 million to $2 million per bitcoin.

It sounds completely outrageous. But it may not be as far-fetched as people think, if bitcoin gobbles up every single currency in the world.

Bitcoin has about a $200 billion market cap as we speak. That would make it already the 34th or the 33rd largest fiat money in the world.

When you look at the market caps of all the fiat monies in the world, it has a higher market cap than the monetary base of a lot of countries.

So this trend is already well established and in motion. And I think it will accelerate.

Thanks so much for your input, Nick. I think we’ll leave it there. Hopefully, I’ll catch up with you again, as this story keeps developing.

Nick: Sounds great, Chris. Happy to speak with you anytime.

Rachel’s note: If you want to know more about FedCoin… and how the government’s using it to carry out a sinister, underhanded cash grab… we urge you to watch Nick’s urgent briefing here. He’ll go into all the details… and reveal the best ways to protect your hard-earned savings.