What if there was a way to “force” your investments to rise in value?

In a way that’s virtually guaranteed.

But a certain famous billionaire has been doing just that.

And how you can be a part of the profits, too…

We do this by showcasing ideas from our cast of in-house investing experts. Among them is venture capitalist, geologist, entrepreneur, and investor… Dave Forest.

Before we explain the idea of “forcing” an investment higher, here’s some background.

The foundational idea behind Casey Research is to help investors make small bets in a broad range of investments to generate outsized gains.

It’s why Casey Research has been at the forefront of small-cap technology and mining investing for the past 40 years.

That’s because those sectors offer the best opportunities for big gains, while only putting a small amount of money at risk.

That brings us back to the idea at the top of this essay – the idea that you can “force” your investments higher.

This is all to do with our favorite investment type: warrants. Casey Research has helped investors profit from warrants for years. So to us, this idea isn’t new.

And importantly, it isn’t new to a certain billionaire investor either. And we’re not talking about Warren Buffett – although Buffett is no stranger to warrants either.

You may remember that Buffett made millions from his warrants investment in Goldman Sachs when he helped bail out the investment bank in 2008.

But this time, the billionaire investor is Jeff Bezos.

And based on work from colleague Dave Forest and his team, we’ve figured out exactly how Bezos has used warrants to help build his fortune.

Here’s what Dave has discovered about Bezos and Amazon’s investing strategy… and it’s quite a simple formula.

That’s over 10 times the value from just three years ago.

And taking a closer look, we can see that Amazon and Bezos aren’t playing for small gains.

They want to make it worth their while every time they take a stake in a company. Here’s the key number… which shows you just how important this strategy is to their investment plan…

But in 2019, the company wanted to expand its partnership. So Amazon decided to invest in Cargojet.

But Amazon didn’t ask for stock… It asked for warrants.

But for Amazon to “unlock” all the warrants, it has to spend $400 million with Cargojet over that timeframe.

Today, shares of Cargojet trade for $202. That means Amazon’s warrants are showing about a $250 million gain so far. It also means that Amazon was able to “force” the Cargojet share price higher.

Each warrant gives Amazon the chance to buy stock for $17.73. At today’s price, Amazon already has a built-in $25 million gain on its warrants. And how much higher can shares go if Amazon keeps pumping money SpartanNash’s way?

Do this over and over again and you can start to see how Amazon is playing for keeps. It’s gaining a strong relationship with suppliers… it’s getting priority access to supplies… and it’s legally “forcing” higher the share prices of the companies it deals with and invests in.

But we can find the opportunities in which big investors like Bezos and Amazon are “forcing” the share price higher… and even better, we can use warrants in other ways to our advantage.

In fact, we’d say that Dave’s strategy is even better than Amazon’s. It’s a strategy that helped his readers to a gain of 4,942% in less than two years.

For instance, in February 2019, Dave’s team recommended warrants of Purple Innovation (PRPL). At the time, the stock was trading for $5.75.

But the warrants did a lot better. When Dave recommended selling the warrants, they traded for $9.58. That’s an astounding 4,942% gain – a 50x return. It’s also 11 times better than the stock’s return. 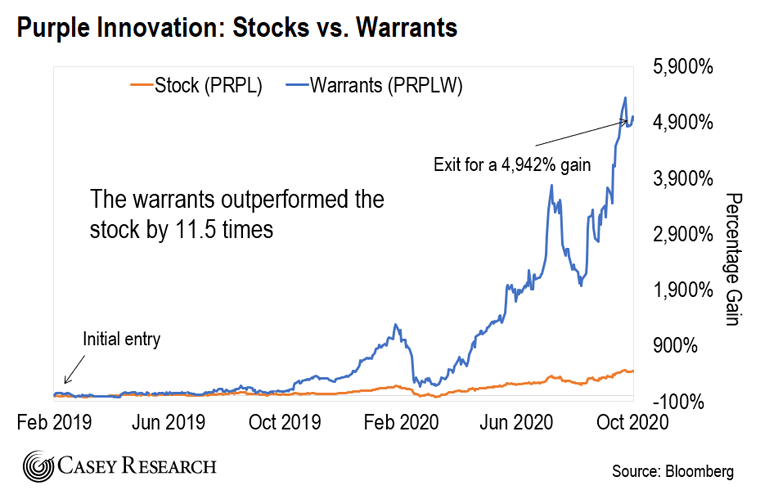 That’s true leverage and it’s how Dave is helping thousands of regular Americans tap into this niche area of the market. And you have the opportunity to take part in that, too…

Now… Jeff Bezos has another deal in the works.

And Dave says he’s never seen a deal with the potential to make his readers as much money as this… ever. He believes those who get in before mid-November will be able to make 49 years’ worth of profits… in one year.

It’s an opportunity so historic that he’s holding his first event ever on Wednesday, October 20 at 8 p.m. ET to get the word out.

It’s called the “Zero to Retirement Summit.” And if you join him… he’ll give you all the details when he reveals Amazon’s next target.

It’s an event you don’t want to miss.