A few years ago, I wrote about Elon Musk’s worst nightmare.

I was looking into the future. I believed there was one thing keeping the Tesla founder awake in the wee hours.

This week, China asked its firms to help secure supplies of rare earths. The situation grows more desperate each week.

The world’s biggest armies need rare earths hard tech to run. They’ll pay nearly any price to get it. The alternative is planes grounded, systems down, and wide-open holes in defense networks.

But an event last week kicked things to a new level for hard tech profits. The opportunities from this new play could dwarf what we saw in rare earths.

We don’t hear much about nickel. For decades, this obscure hard tech went mostly into steelmaking. It was important, but not ground-breaking.

Yet… the electric vehicle (EV) revolution changed that.

Nickel is the biggest hard tech for EV batteries. A full 80% of the cathode in a standard NMC 811 battery is made of nickel. (The rest is made of 10% manganese and 10% cobalt, hence the name.)

That’s where the nightmare comes in for EV giants like Tesla.

A few years ago, Elon Musk went “all in” on nickel. He publicly begged mining companies to produce it. He said he would give a “giant contract” to anyone sending nickel for Tesla’s batteries.

He was forced to do it. At the time, EV batteries relied on a different hard tech – cobalt. But cobalt had massive issues.

Most of the world’s cobalt comes from the Democratic Republic of Congo, in western Africa. It’s a tough place to work. Reports of corruption, warlords, and child labor regularly hit the press.

That’s way too dirty for Tesla. The company wanted battery tech that was clean, efficient, and responsible.

Elon pushed his engineers. They figured out how to replace cobalt in their batteries.

Nickel was the answer. By adding more nickel, they could cut cobalt and reduce their exposure to the tragic stories coming from the DR Congo.

For awhile, the switch to nickel looked great. Tesla got quality batteries without the baggage. They doubled down, betting their future on their new nickel-heavy battery.

Then last week, this happened… 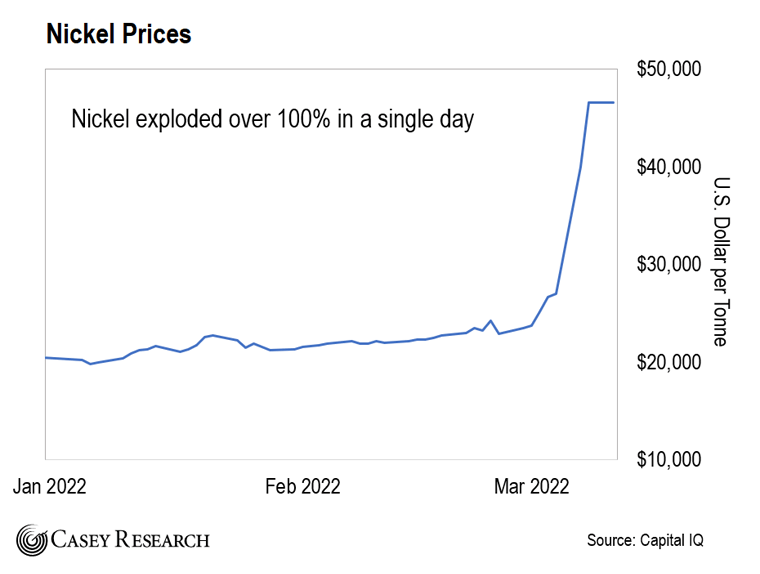 Nickel’s price spiked. Actually, spiked is an understatement. Nickel absolutely exploded. The price for this hard tech went up over 100% in a single day.

Elon Musk’s worst nightmare turns out to be… Russia.

Russia is a big nickel producer. It supplies nearly 10% of all the nickel hard tech used on Earth.

In fact, one of the world’s largest nickel mines is in Siberia. It’s called Norilsk. Here’s a photo of the massive mine. 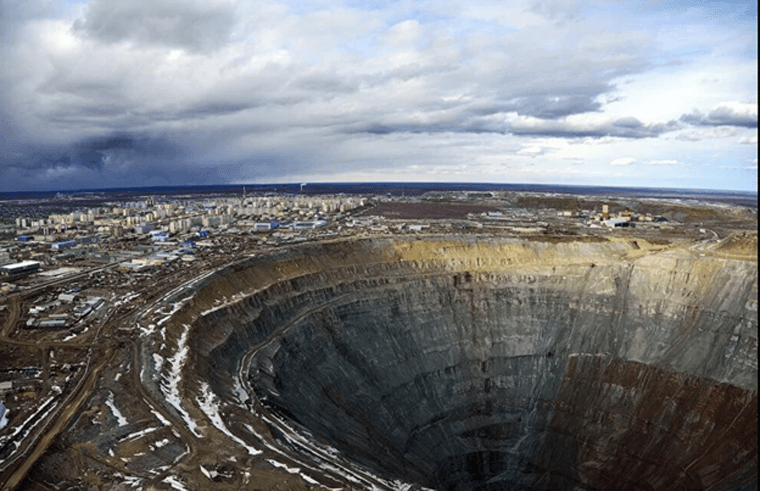 The Russian invasion of Ukraine threw nickel into chaos. With sanctions hitting, a good chunk of the world’s nickel supply disappeared nearly overnight.

Then China got into the act.

Chinese traders had been shorting nickel, trying to suppress the price. China needs a lot of this hard tech to supply its own EV business. It wanted to keep prices low.

But when the Russia news hit, nickel surged higher. That caused a “short squeeze.” The short sellers scrambled to buy nickel and pay back their short positions.

That desperate buying rocketed nickel to 100% gains in a day. It stunned traders, investors… and especially end users like Tesla and Elon.

This is their worst nightmare. The spike in nickel hard tech makes their cars more expensive. It’s going to hit their bottom line in a big way.

But it’s great for one group of hard tech companies.

The stocks that make nickel.

Tesla needs nickel, whatever the price. And that’s a perfect setup for nickel hard tech stocks. They can name their price… and watch the cash flood in.

P.S. You’re seeing the effects of the spike in price of hard tech across your portfolio… in your daily shopping… and even at the gas pump. But there are ways to protect your wealth and your family from this at the same time.

Check out my presentation on the best ways to keep up with rising prices right here.