“Do you have anything for dogs?”

“Sure,” the store attendant said. He then pointed out a few products in a glass case.

The woman grabbed one of them, and then walked to the register to pay.

After overhearing this, I also became interested in what was in this glass case. Because it wasn’t filled with typical pet-care products…

• It was filled with CBD (cannabidiol) products…

CBD is a compound in cannabis.

It doesn’t get people high like THC (tetrahydrocannabinol). But it does offer many health benefits.

People take it to treat anxiety, insomnia, chronic pain… you name it. And yes, some people even give CBD to their pets.

Of course, you’d already know this if you’ve been reading the Dispatch. Back in May, I predicted that CBD would become the next big health craze.

In fact, one of my good friends used to give his dogs CBD to help with their arthritis. He tells me it “did wonders.”

I believe him. I mean, just look at how many CBD products this health store in Manhattan has in stock… 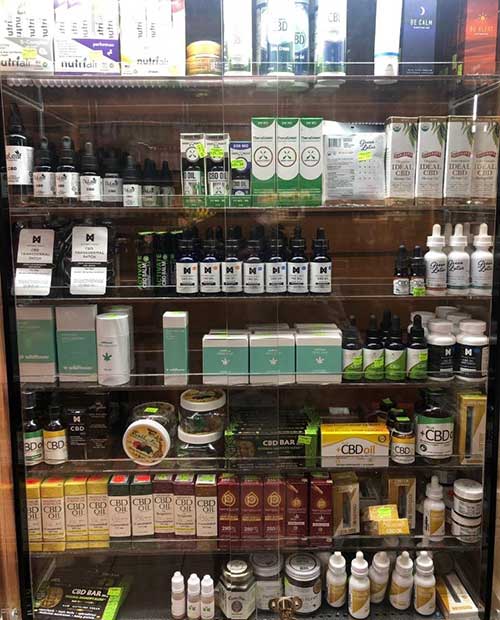 A shelf stocked with CBD products in a Manhattan store

You should also know that many of these products are expensive. Some cost more than $100 for about a month’s supply.

That’s a lot of money. But that hasn’t stopped people from buying them.

In fact, the store attendant told me that these products are flying off the shelves. He also said that he gets many repeat customers.

And get this… cannabis hasn’t even been legalized in New York yet, either for medical or recreational use. And that’s still not stopping people from buying CBD products.

In Los Angeles, juice shops are selling CBD-infused drinks. And in Delray Beach, Florida—where Casey Research is headquartered—pharmacies are selling all sorts of over-the-counter CBD products.

• This is great news for everyday Americans…

It means they have an alternative to pharmaceuticals, which can be addictive and dangerous if abused.

The rise of CBD is also a huge opportunity for speculators. I’ll explain just how big in a second. And I’ll show you how to take advantage of this opportunity.

But let me first address the elephant in the room…

• Marijuana stocks have been getting crushed…

The average North American marijuana stock is down almost 30% over the past two weeks. Some smaller, more speculative marijuana stocks are down considerably more.

Many investors see this as proof that the great marijuana bull market is over. But not Crisis Investing chief analyst Nick Giambruno. He says the recent pullback is perfectly healthy…

After the huge run up in cannabis stocks earlier this year, a pullback is normal. This is especially true with young companies in a new industry.

After all, nothing goes up in a straight line.

No specific negative news has hit the cannabis market. In fact, it’s quite the opposite. The industry’s fundamentals are getting even better.

This is a multi-year mega trend that will culminate in the global legalization of cannabis and new markets worth hundreds of billions of dollars. This story is closer towards its beginning than its end.

With all of the huge legalization news that’s likely to come out soon, I expect cannabis stocks to resume their upward momentum shortly.

In other words, Nick sees no reason to panic-sell your marijuana holdings. If anything, now’s a chance to pick up marijuana stocks on the cheap… specifically ones with exposure to the rapidly growing CBD market.

I say this for a simple reason.

• Demand for CBD is exploding…

This year, the combined hemp-CBD market alone is on pace to do $591 million in sales. (Hemp is a variety of the cannabis plant grown for its fibrous material. It’s used for things like paper, clothing, and even building insulation.)

That’s impressive for a market that barely existed a few years ago. But it’s just a taste of what’s to come…

According to market research firm Brightfield Group, the hemp-CBD market could be worth $22 billion by 2022. That means it could get 40 times bigger over the next four years.

So, consider speculating on U.S. marijuana stocks if you haven’t yet.

I specifically encourage you to look at companies that sell CBD products. They stand to benefit the most from a CBD rescheduling by the Drug Enforcement Administration.

Just remember that the legal marijuana market is still in its infancy… So treat marijuana stocks like a speculation.

Don’t bet money you can’t afford to lose. Keep your position sizes small. And you may even want to trim your positions once you’re sitting on big profits.

P.S. Like I showed you today, my colleague Nick Giambruno is all over the cannabis market. He’s shown his Crisis Investing subscribers the best ways to invest since last summer—long before anyone else was tuned in to this market.

And right now, Nick says he’s found seven cannabis stocks set to skyrocket as legalization spreads worldwide. If you want to take part in the speculation of a lifetime, you need to get exposure to these companies before November 6…

How are you taking advantage of the CBD health craze? Are you a fan of the product… or just speculating on its success?

Send in your thoughts, along with any questions or suggestions for the Dispatch, to [email protected].