Jeff worked as a tech executive for decades. It’s given him an edge in finding trends with life-changing potential for his readers. And it’s not often that a breakthrough stuns him…

But he spent the past few weeks traveling America. And thinks a new development he uncovered while on the road… could be the biggest investment opportunity of this decade.

Last week, he held a special briefing to go over all the details. And even revealed his No. 1 recommendation to take advantage. Just go right here to watch the replay.

Back in the summer of 1956, John McCarthy, a young assistant professor of mathematics at Dartmouth, met with other scientists to discuss a topic that most people considered science fiction… Thinking machines.

And within a few years, scientists around the world were teaching computers to play checkers, solve algebra word problems and mathematical theorems, and speak English.

One of McCarthy’s fellow scientists, Herbert Simon, even predicted that “machines will be capable, within twenty years, of doing any work a man can do.”

Why do I bring up this history?

Because, while Simon’s timeline may have been optimistic, artificial intelligence (AI) has become one of the most cutting-edge technologies of our modern age.

We use AI in health care, cybersecurity, e-commerce, advertising, agriculture, education, finance, and more. There’s almost no area of society or industry untouched by its influence.

And that has major implications for us as investors.

Despite the pervasiveness of AI, however, very few of us understand just how fast this technology is progressing…

Here’s a chart that can put the progress into perspective: 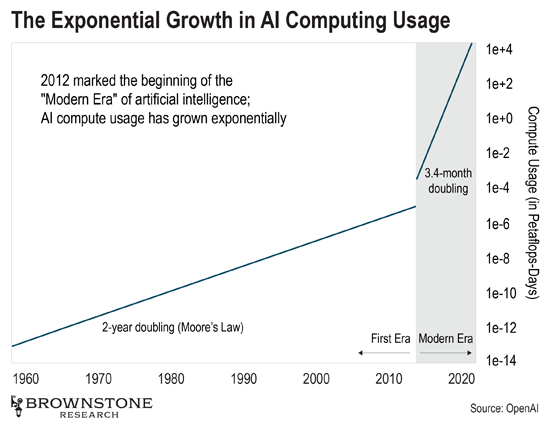 OpenAI, the AI research entity launched by Elon Musk and Sam Altman, released this graph of the amount of computer processing power required to run complex AI models over time.

As you can see, up until 2012, the power requirement doubled about every two years, following Moore’s Law of exponential growth.

But then computational power made a big jump up in 2012.

In fact, our computing requirements have doubled every 3.4 months since then. So if we look at the exponential growth happening with AI… it now dwarfs Moore’s Law.

This is an indication of how powerful AI is becoming. The amount of computing power we need to run AI models is vast.

And as we can see above, the growth of processing power for AI is so explosive that the chart looks like a hockey stick. That means AI now has the ability to solve problems that were nearly unthinkable just five years ago.

These are problems like treating and even curing disease by using AI to analyze billions of compounds, allowing us to discover potential new drugs and therapies in days instead of months or years…

AI is enabling autonomous driving technology by helping our cars learn to be safe drivers, which will save millions of lives each year by preventing car accidents… 90% of which are caused by human error.

And AI is now even replacing, or augmenting, our human abilities in the field. As just one example, an AI won a dogfight contest in August competing against a human F-16 fighter pilot in the United States Air Force. After four billion simulations, the AI was trained to adapt under any circumstance imaginable.

These are just a few examples. There are many, many more.

A report from International Data Corporation shows that companies will spend around $50 billion developing and implementing AI and ML this year alone. And this spending is going to more than double over the next four years, hitting $110.7 billion annually in 2024.

That’s a lot of capital flowing into this space. And that’s why we should be paying attention as investors…

This will be a major boon for the software companies developing AI technology. And this advanced AI software will drive major demand for next-generation hardware as well.

These are the ways that we’ll be able to take advantage of the exponential growth of AI. Let me show you just one example…

The Chips of the Future

Back in May, NVIDIA announced its A100 artificial intelligence chip at the GPU Technology Conference (GTC).

Talk about horsepower. It has 54 billion transistors on a single chip. It can run at five petaflops, which means it can do five quadrillion operations per second.

Most sequential product releases in the semiconductor industry deliver maybe 2–3 times performance. To see a 20x jump like this in a single generation is unheard of.

Allow me to put this in context…

But with NVIDIA’s new product, all that’s needed is a single server rack, costing $1 million and just 28 kilowatts of power.

So NVIDIA’s new product provides the same processing power at one-tenth of the cost and just 4% of the power requirements. Wow.

I worked as a technology executive for decades. It’s not often that a breakthrough really stuns me.

What we’re talking about here isn’t even exponential growth. It’s a massive leap in one shot. And it’s these kinds of bleeding-edge chips that are going to fuel the continued growth of AI.

This chip’s cost makes it accessible to all corporations and government agencies. And we can expect companies like Amazon Web Services to acquire the tech and make it available on demand in the cloud. That way, even small, early stage companies can “rent” this kind of computing power without any upfront costs.

That will put it in the hands of any researcher or data scientist who wants to experiment with the world’s most advanced AI hardware.

The industry is going to jump all over this. We can expect to see extraordinary breakthroughs in AI using this chip.

I first publicly recommended NVIDIA back in early 2016 to a group of wealthy investors. Some people thought I was crazy. But I saw the company’s potential. NVIDIA was the No. 1 S&P 500 stock of that year.

The stock is up more than 1,800% since that original recommendation.

These gains show the power of investing in this kind of technology. Artificial intelligence is remaking the world as we speak. We are killing scarcity and creating a golden age of abundance right before our eyes.

The next 30 years are going to bring us such incredible technological developments that we will hardly recognize the world we find ourselves in. It’s going to be an amazing journey.

And this multiyear boom will overflow with incredible investment opportunities just like NVIDIA back in 2016.

In fact, I’ve already found the perfect way to profit from this coming boom…

If you want to learn more, I recently hosted a special event called Jeff Brown: Beyond Exponential.

I revealed how everyday investors can build a million-dollar tech portfolio – from scratch – in today’s market. These are the stocks I would personally want to own in my own portfolio. You can go right here to learn all the details.

Now I believe I’ve found the company that could rival NVIDIA.

I gave readers the name of this company for free during my special investment summit. And if you haven’t already, you can go right here to watch the replay.