Rachel’s note: Despite news of a COVID-19 spike and more “lockdowns,” the talking heads continue to gush over the market’s climb higher. Why the disconnect?

Our friend Jason Bodner at Palm Beach Research group has the answer… because he’s a true Wall Street insider. And he designed an unbeatable stock-picking system which he uses to carefully track Big Money’s moves.

It lets his readers ride Big Money’s coattails to huge gains, while giving insight into the sectors that are moving the market.

Below, he boils down the real reason the market is rallying…and it might surprise you…

If you ask a person on the street, “Is the stock market going up every day?” I’d wager that most would say yes.

After all, that’s the story the media is running with. Every day, the talking heads gush about stocks hitting all-time highs and how the market is impervious to any negative headlines.

But have stocks really been rising day after day?

I don’t see it that way. There’s more to this market than meets the eye.

That’s why I don’t rely on the media to tell me how the market’s behaving. I turn to my “unbeatable” stock-picking system to clue me in to what’s really going on.

And today, I’ll show you the real reason the market is going up… and the moves you should be making today to take advantage of it…

Tech Is Dragging the Market Higher

To understand what’s going on, we have to go back to the start of the summer…

On June 8, I predicted that a sell-off could be around the corner. I pointed to the unbelievable amounts of Big-Money buying in exchange-traded funds (ETFs).

ETFs offer broad exposure to the market. So Big-Money activity in ETFs is a strong proxy for the market.

And when Big-Money buying in ETFs reaches extremes like we saw back in June, it’s a sign retail money (mom-and-pop investors) is also pouring into stocks. And mom and pop are usually the last to arrive at the party.

So that’s usually a signal that the top of the market is near and that lower prices would be expected ahead.

Now, what’s happened since then? Aside from a massive single-day sell-off, stocks have appeared to grind higher.

But if you dig deeper, you’ll see that’s not exactly true.

Take a look at how the major indexes have performed since June 8:

All of them are negative or nearly flat – except for the Nasdaq, which has climbed higher.

You see, the other indexes include stocks from a wide range of sectors: like industrials, discretionary, and healthcare. Meanwhile, the Nasdaq is weighted heavily toward tech – and it’s crushed the other indexes since the start of summer.

So just a handful of tech stocks are pushing the market higher.

Also, tech stocks carry a lot of weight within these indexes. If Apple goes up and Chipotle goes down – all things being equal – it’s likely the market indexes will go up.

As a matter of fact, I went back and dug into the data to see how many stocks had the strongest buy signals over the last six months.

And guess what? About 56% of them were technology stocks. 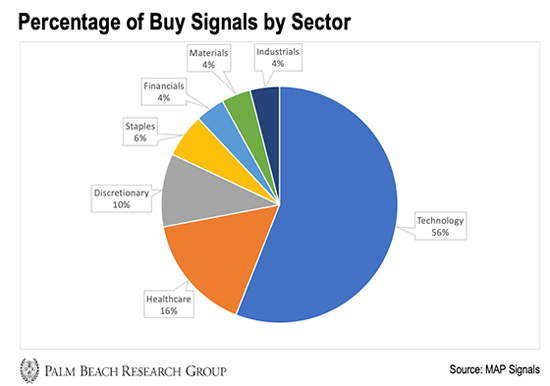 That just goes to show you the Big Money’s been concentrating their bets on tech… But the media would have you think that everything is going up.

My prediction in June, that a downturn was coming, was actually right. With Big Money tailing off, the other three indexes are tailing off with it. It just doesn’t appear that way because of Big Money’s rotation into tech stocks.

So, what does that mean for us now?

A Sell-Off Is on the Horizon

The market’s been in overbought territory for about 10 weeks now. The longest it’s been that way is 13 weeks. So all signs point to another downturn in the near future as the Big Money slowly trickles out of the market.

But that doesn’t mean it’s time to panic. It’s time to be patient, sit on some cash, and wait for better prices that are just on the horizon.

I wouldn’t advise buying into these levels right now. But if stocks continue to go higher, we’re surfing the wave and enjoying the ride.

P.S. Remember, my system does more than just track Big Money’s moves in the broad market. It also flags the individual stocks that Big Money is piling into.

By riding Big Money’s coattails, we’ve already seen triple-digit winners like The Trade Desk, SolarEdge Technologies, and Veeva Systems. And once the next pullback comes, it’ll tell us the next outliers that could see huge gains.

I’ve put together this special presentation to show you all the details of how it works. Check it out right here.