Rachel’s note: If you own a bank account or any form of online account, chances are you’ve probably been hacked at some point or another.

So you know how frustrating that can be. But imagine a data breach on a bigger company or government entity… it can cause immeasurable damage.

That’s exactly why the cybersecurity sector has been quietly growing in recent years.

The good news is… the flood of money flowing into this industry creates a huge investment opportunity for us.

So here’s Nomi Prins, Casey Research colleague and global financial expert, with details on how you can play this trend…

I bet there aren’t many readers who haven’t had their email, social media account, or bank details hacked at some point.

I have… several times.

The last time it happened, I was in Medellín, Colombia. You’ll recognize the name if you watched the Netflix series Narcos about Colombia’s powerful, violent drug cartels set in the 1980s.

Today, Medellín is a thriving metropolis of art, fashion, and great food.

I was in my hotel room there when I got a fraud alert on my phone. It said my credit card was being used to purchase a bunch of plane tickets to multiple destinations.

The weird thing was I hadn’t used that card for months. It took several frustrating phone calls to fix everything.

For companies, getting hacked can be a very costly experience. It can include the expense of discovering and reacting to the attack. Then there’s the loss of revenue or communication from being offline.

There’s also the often-undisclosed amounts some companies pay the hackers just to bring the whole ordeal to an end.

It all adds up. In 2021, the average cost of a data breach in the United States was about $9 million.

And for some companies, a data breach can cause immeasurable and lasting reputational damage.

That’s why the cybersecurity sector has been quietly growing in the past few years.

But some recent events are putting the sector into overdrive… and that spells opportunity for investors.

I’ll show you what these events are and how to position your portfolio to profit shortly.

But first, let’s have a look beneath the hood of this growing industry…

Hackers Attack Weakness or at Times of Vulnerability

Cyberattacks have become pretty commonplace, as this next chart shows… 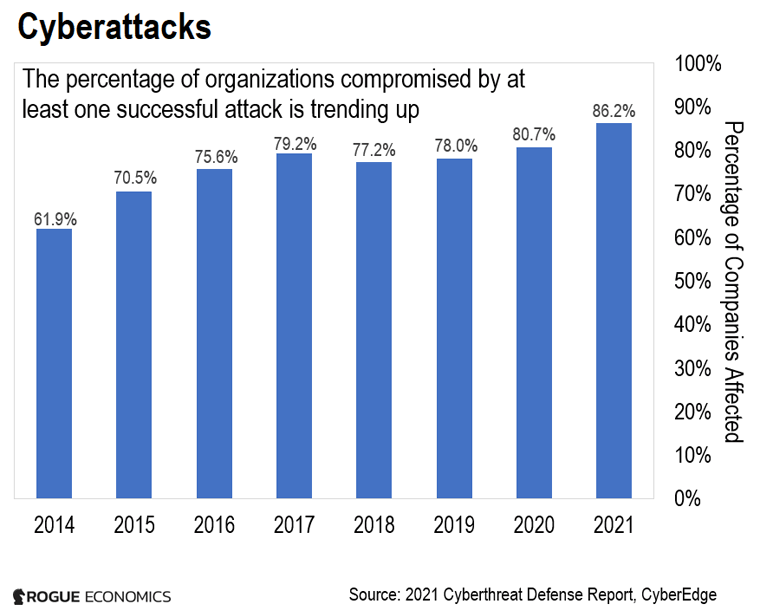 Hackers take advantage of any weakness or vulnerability they see. That’s one reason why the healthcare sector suffered from increasing cyberattacks during the pandemic.

In fact, there was a 45% increase in the number of weekly cyberattacks on healthcare organizations globally in November and December 2020 versus October 2020.

And according to a recent Fortune report, the number of ransomware attacks more than doubled last year. A ransomware attack is where the hacker attacks and blocks access to a company’s data or systems. Then, it demands a ransom to return that information.

There was a 1,885% increase in ransomware attacks on governments. And attacks on healthcare companies went up by 755%.

Experts predict the global cost of cybercrime could reach $10.5 trillion by 2025.

So it’s no surprise that the global cybersecurity market could explode. 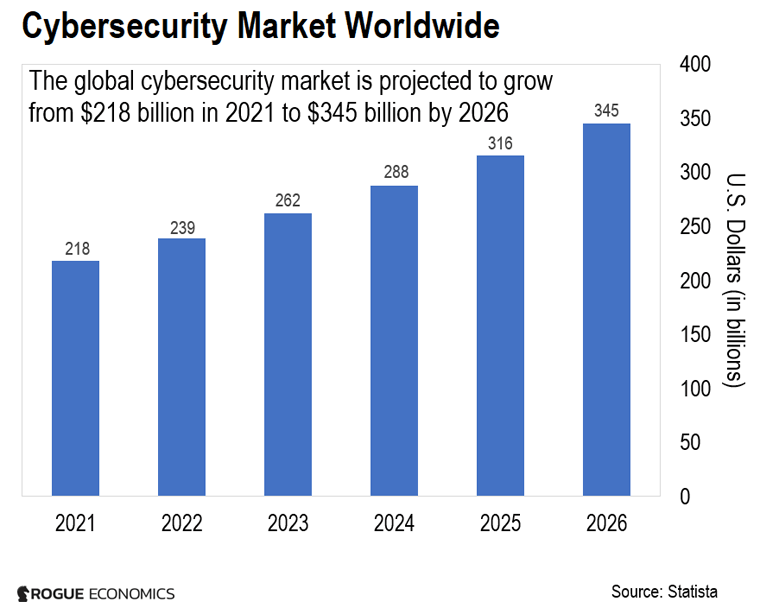 Staying One Step Ahead of Global Security Threats

As I said above, there are recent developments that will have a huge impact on this sector in the coming years.

You probably remember the cyberattack on Colonial Pipeline last year. It crippled the largest fuel pipeline in the U.S. and resulted in shortages and power outages across the East Coast.

We also saw cyberattacks on software developer SolarWinds and food processing company JBS. These all revealed just how vulnerable some of our critical infrastructure is.

Russia’s war in Ukraine is another huge catalyst for the cybersecurity industry.

The West is imposing sanctions on Russia because of its invasion of Ukraine. But intelligence officials are worried that Russia will launch retaliatory cyberattacks on U.S. infrastructure.

That’s not a random speculation. The group who carried out the Colonial Pipeline cyberattack is said to have links to Russia.

So it’s not beyond the realm of possibility that it – or another group – could strike again.

We need to be as proactive as possible to stay one step ahead of any potential attacks.

That’s why the field of cybersecurity is now a key part of military and national security policy.

And it has updated NATO cyber policy for the first time in seven years.

But Russia’s invasion of Ukraine elevated the U.S. government’s focus on cybersecurity even higher.

On March 21, the White House released a new set of cybersecurity principles. They were specifically directed at the private sector.

The Biden administration urged firms to strengthen their cybersecurity practices. This is because the private sector owns and operates much of our critical infrastructure. So it’s prone to a very real threat of cyberattacks.

The White House also placed new cybersecurity standards on the software it buys. This impacts private contractors who provide software products or services to government agencies.

So these standards will become commonplace as contractors supply both public and private markets.

A Matter of National Security

The government is trying to be as proactive as possible. It knows that it needs to stay (at least) one step ahead of any potential cyberattack.

It’s a matter of national security.

And when it comes to national security, the U.S. government will not be found wanting…

Now, as regular readers know, I follow the money. And wherever public money goes, private money is bound to follow.

All of this tells me that there’s going to be a flood of money flowing into this sector in the coming years. And that creates a huge investment opportunity for us…

A Simple Way to Profit

So what’s the best way to play it?

The Russian attack on Ukraine has pushed the stocks of major cybersecurity companies such as Fortinet, Palo Alto Networks, and CrowdStrike Holdings up.

But there is upside in the entire cybersecurity space. A good way to access that is to buy the Global X Cybersecurity ETF (BUG).

It covers an array of growing cybersecurity names. It’s one of the best moves you can make today.