Kris’ note: In the late ‘90s, companies went public early, before their shares skyrocketed. As a result, every retail investor had the chance to get in on incredible returns.

Since then, things have changed…

When a company goes public today, private equity has already taken most, if not all, of the gains. Meaning there’s little upside left over for normal investors.

Fortunately… Jeff Brown, editor at Brownstone Research, has identified a recent change in regulations that allows you – the regular investor – to enter private deals on “Day One.”

He will reveal all the details about this exciting news in his event Day One Summit. It’s taking place tonight, November 17, at 8 p.m. ET.

Make sure you sign up (for free) here. Don’t miss out on this opportunity to achieve transformational wealth.

Initial public offerings (IPOs) simply aren’t what they used to be.

In the ’90s and 2000s, a company commonly went public if it was generating $50 million a year in revenue and preferably at cash flow breakeven. Take Amazon, for example. 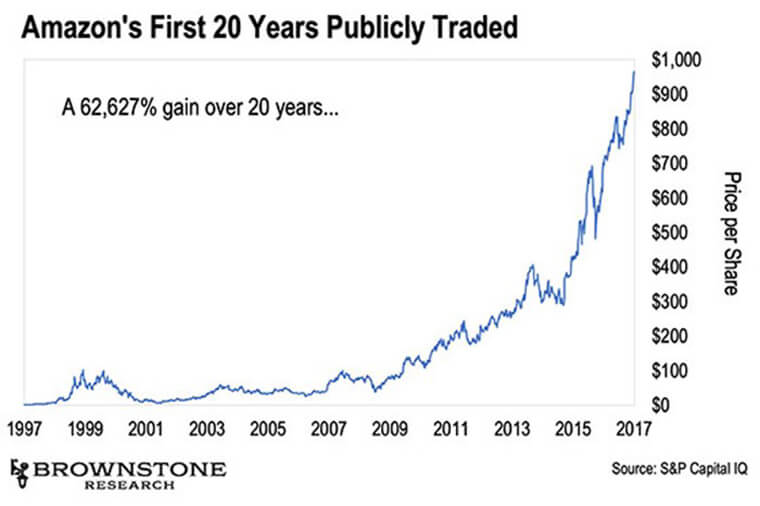 On a split-adjusted stock basis, Amazon rose from $1.54 per share to $966 during its first two decades as a public company. That is an incredible 627 times your money, or a 62,627% return on an investment.

The best part… Every retail investor had an opportunity to get in on those returns. Anyone who had a brokerage account could have enjoyed those gains.

Sadly, the opportunity to invest early has almost disappeared.

As I mentioned, in the late ’90s, companies like Amazon went public during their earliest stages of development. That’s when the return potential was highest. But these opportunities have all but disappeared. What has happened since then?

It was a combination of two factors. The world experienced technology-driven economic growth unlike anything it had seen before.

Advancements in semiconductor technology and software development hit an inflection point, enabling the creation of smartphones, the modern internet, and extraordinary developments in machine learning and artificial intelligence that impact our lives in ways most of us aren’t even aware of.

And during the same time, interest rates plummeted. At the time of Amazon’s IPO, 10-year U.S. Treasury yields were an incredible 6.7%.

At that kind of yield, any investment bank or investor could double their money in 11 years… completely risk-free and without any leverage at all.

But that kind of yield doesn’t last forever. The yield on a 10-year Treasury bond has been on a downward trend over the last 20-plus years, dropping to a paltry 1.6% today. 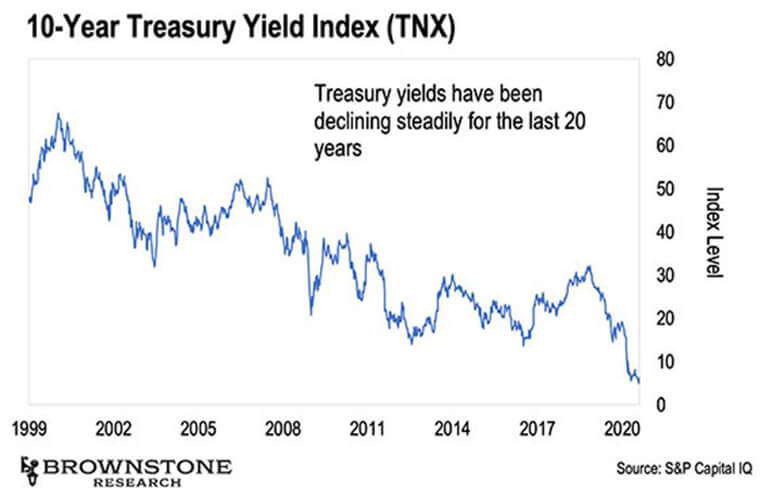 This downward trend in yields caused the investment community to look for other opportunities capable of generating much higher returns.

And this is precisely why high technology became the asset class that it did during that time frame.

During that 20-year window, the broad-based S&P 500 Index rose 171%. The technology-focused Nasdaq Composite returned about double that – 360%.

Venture capital, private equity, institutional money, and family offices all knew what was happening. They were using the same investment playbook.

What did they do? They decided to keep the most lucrative investments for themselves.

Instead of taking a company public during its early years, as Amazon did back in 1997, they changed the game.

Rather than giving retail investors access at such an early stage, the strategy quickly became keeping the most promising companies private for as long as possible.

By doing so, private investors were able to consistently increase the value of their investments with each successive venture capital or private equity round.

And after eight to 10 years on average, these private investors would look to take their companies public at incredible valuations.

By being patient and waiting for the right time in the market to take these companies public, they can maximize their profits and leave nothing but table scraps for normal retail investors.

Where to Find the Highest Returns

Sadly, this isn’t going to get better anytime soon. Why? The world is awash with cash right now. Venture capitalists (VCs) and private equity call this “dry powder.”

Institutional investors have been sitting on as much as $1.5 trillion in dry powder. That’s more than Australia’s annual GDP. There has never been this much capital available for investments in history.

And right now, stocks have started off this month with new, all-time highs. Most of this money will not be put in public companies as a result.

Put simply, the bulk of this $1.5 trillion will be put to work in the area with the highest return potential: private companies with high growth ahead.

Unfortunately, most investors haven’t had access to these deals… and their incredible profits.

Investing in the Private Markets

I’ve spent six years trying to help my readers get into investments in their earliest stages, but it’s been an uphill battle.

Unless we are well-connected and have lots of capital at our disposal, we’ll find the private investment space difficult – if not impossible – to break into.

It’s unfair. It means that we won’t be able to find gains like Amazon’s 20 years ago… Those deals have been out of arm’s reach.

Thanks to an important change in government regulations, everyday investors are now being given the chance to invest on “day one.”

And I’m going to bring these types of recommendations to my readers… and the opportunity to reach 100X returns… with “Day One” investments.

I’ll be sharing all about what changed… and how these private investments work… at my upcoming Day One Summit. It’s happening tonight, November 17, at 8 p.m. ET.

This is an event I don’t want anyone to miss out on. I’d encourage anyone who’s ever wished they could achieve transformational wealth to attend.

All you need to do is go right here to save your spot.