Rachel’s note: When considering the Fed’s interest rate policy today and its attempts to control inflation, it’s important to remember that smaller setbacks in the near term can return markets to balanced levels.

So as painful as the rest of 2022 and 2023 may be, it’s far better to opt for controlled burns now… and avoid the most destructive fires if the Fed only half-finishes the job.

Today, income investing expert Brad Thomas and his analyst Adam Galas will explain how current aggressive rate hikes could be viewed as a necessity… and how in the meantime, we’ll protect ourselves from inflation by boosting our income.

For over 100 years, the U.S. Forest Service had a policy of stamping out all forest fires as fast as possible. It worked well for a while… but it was actually laying the groundwork for disaster.

This zero-tolerance policy for wildfires allowed underbrush – like leaves and small branches – to accumulate over decades. And when fires broke out, the abundance of this flammable material meant fires that spread faster than before and grew out of control.

Another thing it didn’t consider was that ash from periodic fires refreshes the soil.

Today, the department has admitted its terrible mistake. It now conducts controlled burns to try and manage the long-term risk of catastrophic fires. And the results are much healthier U.S. forests and a lot less risk to people and property.

So when it comes to preventing future disaster, smaller setbacks in the near term can return an ecosystem to balanced levels.

This is an important lesson to keep in mind when examining the Fed’s interest rate policy today and its attempts to control inflation.

In today’s essay, my analyst Adam Galas and I will show you why intelligent investors have nothing to fear from the Fed’s “controlled fires.”

If your goal is to sleep well at night, like we aim to help you do, we’ll share the one thing you need to do to survive these next few months.

Why the Stock Market Hates the Fed Right Now

The Federal Reserve is raising interest rates at the fastest pace in 42 years. In its entire history going back to 1913, it’s raised rates by 75 basis points just five times. Four of those have been in 2022. 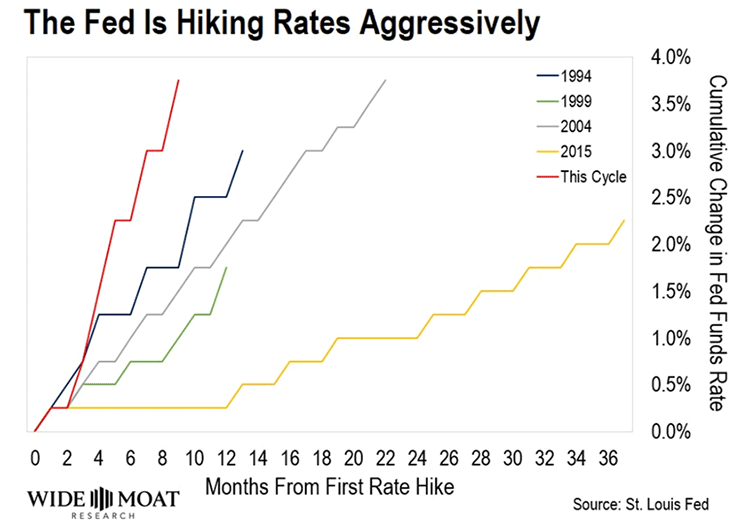 And it’s unlikely to stop until it sees a major reduction in inflation.

Powell explicitly stated, “We still have some ways to go,” and, “The ultimate level of interest rates will be higher than previously expected.”

Here’s Adam with what the experts say we could see ahead:

And it plans to take the Fed funds rate above the rate of core inflation, which is 5.1% right now. The Cleveland Fed expects that to peak around 5.2% in November.

Currently, the bond market is pricing in:

But that’s not all. UBS, Deutsche Bank, and Bridgewater think that if China reopens in 2023 and sends commodity prices soaring again, the Fed might have to go as high as 6% by July 2023.

At the start of the year, 5% to 6% were Deutsche Bank and Bridgewater’s worst-case scenarios. Now, they’re the base case.

So we should prepare to see more pain ahead…

“Controlled Burns” Are a Necessity

One example illustrating how far the Fed is willing to go comes from Powell’s mentor, Paul Volcker. Volcker served as Fed chair in the 1980s. And he dealt with inflation in an extreme way to stamp it out.

Here’s Adam with a recap on what led Volcker to those decisions:

In the ’70s, inflation hit 5%. The Fed hiked rates until we hit a recession and inflation came back to 3%… And then it backed off.

Fearing a long-term recession, it didn’t finish the job.

Inflation then rose to 6%, and the Fed hiked but then cut again due to a weak economy. Inflation fell to 3.75% and then soared to 12%. It hiked and then pivoted again due to the recession. After bottoming at 5%, inflation soared to 15%.

That’s when Volcker stepped in.

Volcker took a butcher’s approach. He hiked rates to 20% in 1981, including 4.25% in a single month. He became the most hated man in America for many years.

But he’s also the man who beat inflation and brought about 40 years of “the great moderation” credited with the best stock and bond market rally in U.S. history.

Today, the Fed has admitted it was wrong about “transitory inflation.”

Just like allowing underbrush to accumulate to prevent a big forest fire, it kept interest rates at near zero for nearly a decade.

But this formed many speculative bubbles, and the fallout from their bursting – paired with out-of-control inflation – could mean decades of hurt for stocks and the economy.

That’s why we’re not worried if Powell and the Fed choose to follow the Paul Volcker playbook to kill inflation once and for all.

As painful as the rest of 2022 and 2023 may be, it’s far better to opt for controlled burns now… and avoid the most destructive fires if the Fed only half-finishes the job.

And in the meantime, we’ll protect ourselves from inflation by turning to the best method I know: Boosting our income. I’ve put together a list of my favorite income-paying stocks in the market. Many are trading at amazing discounts right now, boasting healthy yields up to 8%.

To find out how you can learn their names, go here.