Today, I’ll share one of the safest places to park your money in 2019.

This is more important than ever.

As regular readers know, there’s been almost nowhere to hide.

Eight of the 11 sectors that make up the S&P 500 closed the year in the red. Only healthcare, utilities, and consumer discretionary stocks posted positive returns.

Other developed markets also took it on the chin.

Just look at this chart of the iShares MSCI EAFE ETF (EFA). This fund tracks the performance of stocks from developed markets, excluding the U.S. and Canada. 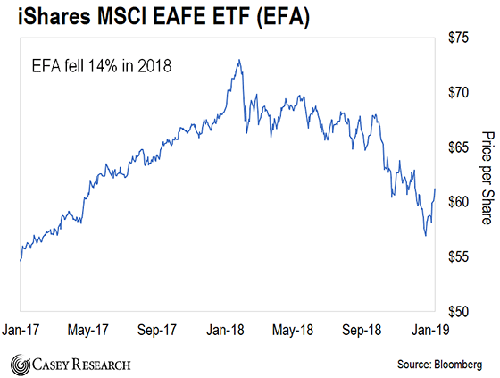 Emerging markets are countries on their way to becoming developed markets like the U.S., Japan, and Germany.

Last year, the iShares MSCI Emerging Markets ETF (EEM) – which tracks over 800 emerging market stocks – ended the year down 15%… its biggest decline since 2015.

You’d think they would have done well because they’re widely seen as “safe havens.” Because of that, many investors take refuge in Treasuries when stocks are falling.

But most Treasuries still ended the year down. Take the iShares 20+ Year Treasury Bond ETF (TLT), which holds long-dated Treasuries. It declined 1.6%.

By now, you get my point. Almost every major stock and bond category posted a negative return last year. The same is true for commodities, real estate investment trusts (REITs), and even gold, although gold finished the year strongly.

BIL invests in Treasuries with one- to three-month durations. These are some of the safest securities in the world.

They’re so safe that institutions use BIL as a cash substitute.

Not only that, BIL paid a 1.7% dividend last year.

It should preserve your wealth just like “real cash,” should stocks and bonds continue falling. Plus, you’ll earn some extra income, which you won’t get if you stick your money under your mattress or park it in most bank accounts.

Mr. Casey, thank you for your recent interview with Justin on the state of American adventurism abroad driven by deep-state interests. I am 66 and have seen my share of what you describe. I believe the United States is on its way to becoming an ungovernable amalgam of political interests, cultures, values, and aspirations. The insiders’ corruption and driving self-interest shall have brought this condition about by short-circuiting nominal government by the people.

Think about it: we are beginning to resemble the landscape of the Middle Ages in Europe: population-dense, polyglot, multi-cultural, leftylib enclaves… our big cities are the city-states, with the vast, underpopulated, rural areas of conservatives becoming the new serfs. This configuration is why the conservatives only prevail anymore in state-wide or national elections. Many thanks.

Thanks to a recent Supreme Court ruling, America’s third prohibition just ended. That means billions of dollars will come out of the shadows. And Strategic Investor editor E.B. Tucker is revealing his top three recommendations to play this new wave – for free – tomorrow at 8 p.m. ET.

E.B. says “We’re looking at the growth of a new market from essentially $0… to potentially $400 billion in a matter of years.”

Go here to lock in your spot for this free, landmark webinar.