Rachel’s note: The global economy is slowing down.

And it’s raising the risk of “stagflation.” That’s when the economy slows down, or stagnates, but prices keep rising.

It’s a typical symptom of The Great Distortion between the markets and the real economy that Casey Research friend, investigative journalist, and financial expert Nomi Prins has been warning you about…

And today, she’ll explain how the Federal Reserve’s out-of-control money creation over the last 14 years has impacted your wealth… and what its most recent interest rate hike means for your money.

The good news is… Nomi has been developing and testing a new strategy to deal with The Great Distortion. It can help you profit in these volatile times – whether the market goes up or down.

Check out her briefing here.

Then, read on for Nomi…

It’s impossible to get away from scary headlines about the economy these days. Not least since the Fed’s latest interest rate announcement last week, which I’ll get to later…

But one headline from the World Bank, in particular, is raising a red flag.

It was part of an alarming report…

Its research confirmed what you probably already suspected – that the global economy is slowing down.

Now, I know you likely didn’t need an official report to tell you that. But the World Bank’s warning about the future global economic conditions caught my eye…

According to its latest Global Economic Prospects report, we’re entering what could become “a protracted period of feeble growth and elevated inflation.”

This raises the risk of something called stagflation. That’s the term for what happens when the economy slows down, or stagnates, but prices keep rising (inflation).

And as always, it’s those at the lower end of the economic spectrum that will get crushed the most.

And there’s an event coming up in August that I believe will unleash a $4 trillion market shock… and kick off the next chapter of The Great Distortion. Those who don’t prepare in advance will lose out.

Today, I’ll show you what it means for your money… and what you can do about it.

But first, I want to explain why the Fed’s efforts to help the economy have all been in vain…

The Fed Made the Great Distortion Worse

Since 2008, the Fed’s total assets have increased nearly tenfold, as you can see on this chart… 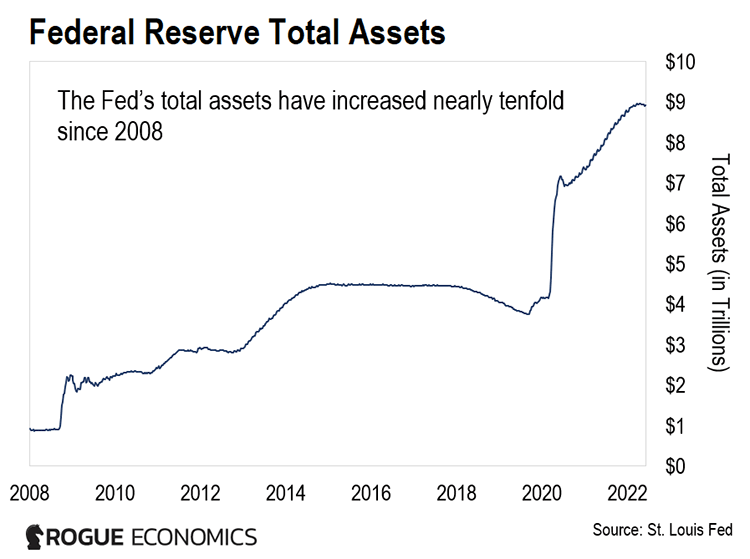 All that central bank money was supposed to help the real economy. First, when the economy crashed in 2008… and then when the COVID pandemic hit. Or at least, that’s what they kept telling us.

And it wasn’t just the Fed… Over the last 15 years or so, the world’s major central banks have conjured a $30 trillion-plus monetary cushion, as this next chart shows… 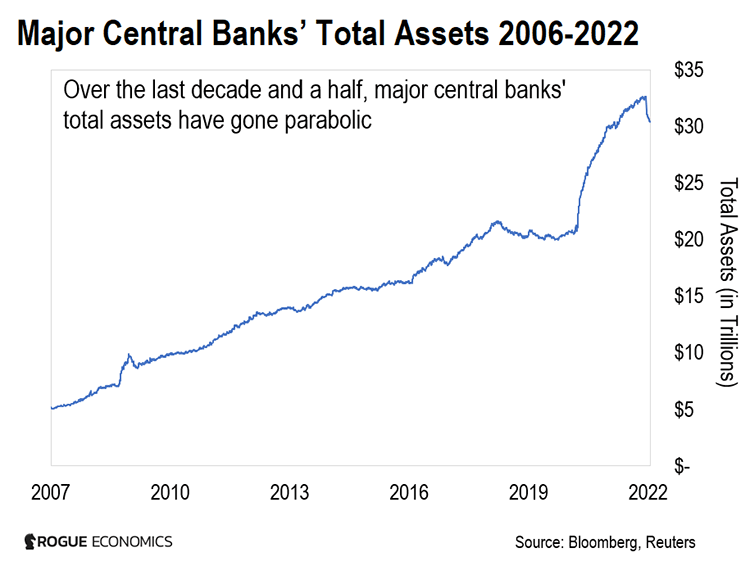 But now, we are seeing signs that, yet again, fabricated money has no lasting impact on the real economy.

Since the Fed and other key central banks turbo-boosted cheap money policy at the onset of the pandemic, the rich got richer… while the poor and middle-class got squeezed.

On Main Street, hundreds of thousands of businesses closed. And as we all feel every day, the cost of living continues to rise. At 8.6%, U.S. inflation is now at its highest level since December 1981.

And as I showed you above, the World Bank just issued a stark warning amid slowing global growth.

So much for all that fabricated money helping the economy…

Right now, the Fed and other central banks are tightening policy in response to rising inflation.

The European Central Bank (ECB) announced a 0.25% hike two weeks ago. That’s its first interest rate increase in over a decade. It comes as the ECB forecasts 2022 inflation of 6.8%.

And with inflation in the U.S. stubbornly sitting above 8% since March, last week, the Fed announced a 0.75% increase. This is its biggest one-time increase in 28 years. And it comes on top of March’s 0.25% increase and May’s 0.5% hike.

Now, these increases were well flagged in advance, so the markets had been pricing them in for weeks. That’s why we’ve seen some crazy volatility in the markets of late.

Of course, the rich can afford to wait market volatility out. That’s because they know the volatility is based mostly on the Fed removing a small part of its cushion.

But they also understand that ultimately, the Fed will see that it can’t really fix inflation. And that the economy is slowing, despite its efforts…

Then, it will realize that it has to back off its hawkishness and soften its stance with regards to interest rates.

Here’s the thing, though. We’ve seen this story play out before – as recently as early 2019.

Inflation wasn’t as high then. Instead, there were other fears in the markets and about slowing economies.

But just like today, what the markets feared most was the Fed’s policy shift toward raising rates and reducing the size of its book.

But that gloom was short-lived. Even as the Fed raised rates – the market eventually got used to it and rebounded. You can see that play out in this chart… 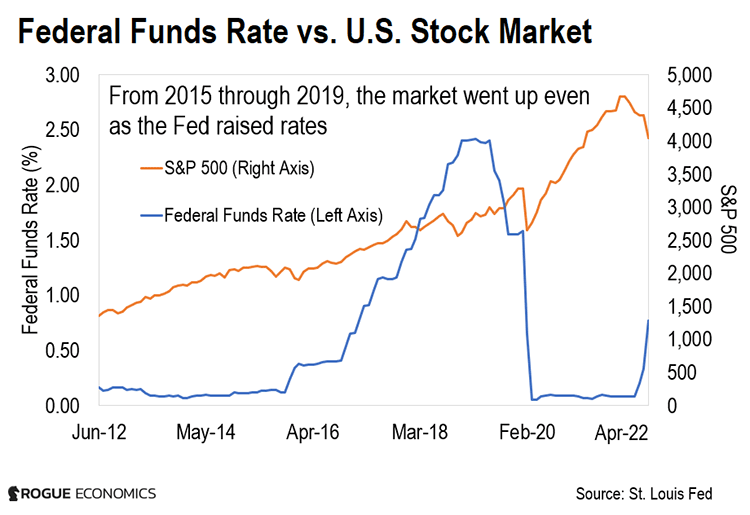 Yet, while that was unfolding, the economy was slowing down. Here’s a headline from the World Bank from January 2019:

Darkening Prospects: Global Economy to Slow to 2.9 percent in 2019 as Trade, Investment Weaken

Back then, economic growth forecasts were also lowered from earlier ones. Emerging markets and the middle class took the hardest hit. All while the rich got richer.

And eventually, the Fed gave up and changed course.

It cut rates three times in 2019, reversing all its rate hikes from 2018. Its official reason was that the economy had slowed down. The negative effects of global trade wars also played a role.

By September 2019, Wall Street was suffering from a liquidity squeeze. So the Fed began growing the size of its book of assets again.

And as you can see from the chart above, the market continued to march upward.

Global Economy on the Brink

It’s not much different this time around. Central banks didn’t understand then – and still don’t grasp – The Great Distortion they’ve created between the markets and the real economy.

The removal of monetary accommodation in the United States and other advanced economies, along with the ensuing increase in global borrowing costs, represents another significant headwind for the developing world.

With energy costs and the cost of shelter and food skyrocketing, there’s grave reason for concern.

And it’s not just market watchers that are reading the tea leaves. Just two weeks ago, the United Nations (UN) Conference on Trade and Development released a report on the global impact of the war in Ukraine. In it, it warned:

The vicious cycles created by a cost-of-living crisis can also spark social and political instability. Higher inflation means higher food and energy prices, and a higher cost of living…

All this reduces the ability of people and governments to cope with a crisis, further fueling social and political unrest.

I borrowed these next two graphics from that UN report I mentioned. You can see that the vicious cycles that have been put in motion, in part by faulty central bank policies, have left the global economy on the brink. 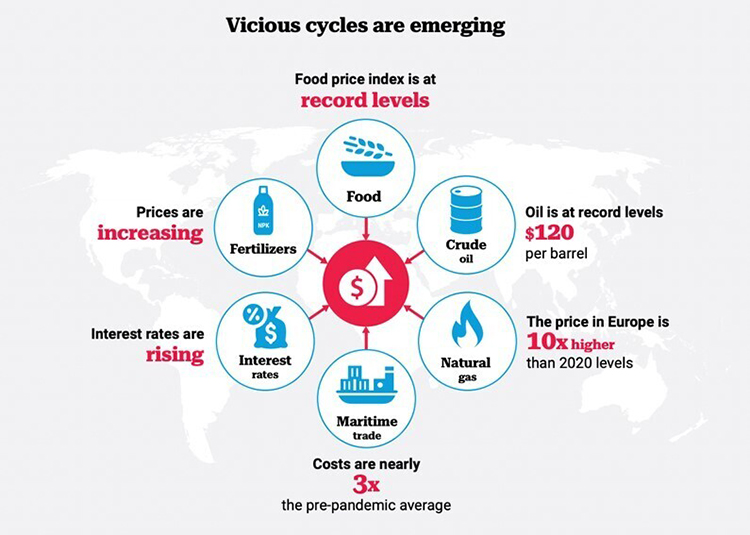 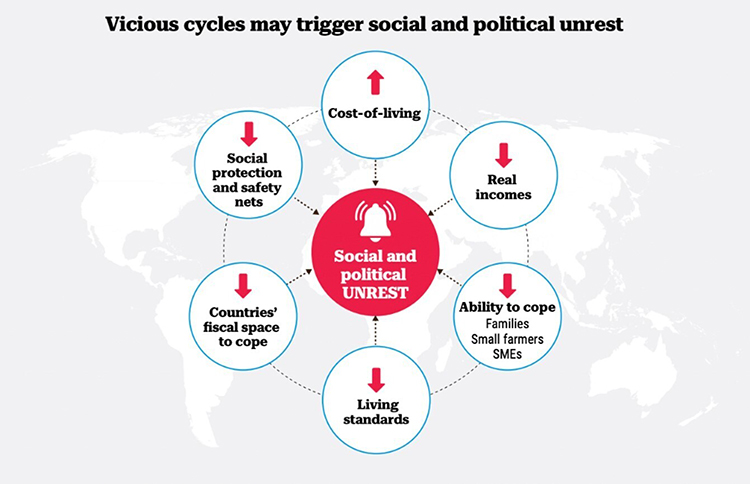 Source: United Nations Conference on Trade and Development report, “Global Impact of the War in Ukraine”

Unfortunately, things may get worse before they get better. At which point, major central banks will flip the script back to accommodate markets. Just like in 2019.

The Fed will finally realize that it is limited in what it can do about prices. That’s because, at the end of the day, central banks don’t own crop fields or oil wells.

So while the Fed can fabricate endless sums of money, it can’t solve a food crisis or dictate prices at the pump.

And that’s why Wall Street is waiting to make a big move.

I believe what’s going on in the market and economy now will mark the next chapter of The Great Distortion… and trigger a $4 trillion market shock.

The good news is, for the past two years, I’ve been developing and testing a new proprietary strategy. It can help you profit in these volatile times – whether the market goes up or down.

And last Wednesday, thousands of your fellow readers tuned in to an urgent briefing I held all about this.

I also gave away – for free – the name of a recommendation that I believe could double your money in these distorted markets.

If you missed it, you can watch the replay now. My publisher has agreed to leave it online for a little while longer.

I promise you, it’ll be worth your time.