Justin’s note: On Thursday, Nick Giambruno, chief analyst of The Casey Report, explained why we’re headed toward the biggest financial crisis in history – thanks to Big Government overreach.

Today, he shows us what we can do to protect ourselves and profit in the face of looming danger to our wealth. Read on for more…

As I showed you on Thursday, the next crisis is going to be the Big One.

The International Monetary Fund (IMF) and the globalists will use it to advance their agenda through something called “Special Drawing Rights” (SDRs).

There’s only one way President Trump can fight back…

There is no such thing as a global anthem, a global currency or a global flag. This is the United States of America that I’m representing.

Trump is not going to surrender the U.S. dollar’s top status and give up monetary policy to a world central bank. That would be akin to lowering the U.S. flag, raising the UN flag, and saluting it.

However, there’s only one way Trump could fight the globalists and their SDR plan: return the dollar to some sort of gold backing.

It should come as no surprise that Trump loves gold…

This is obvious from his buildings. Just look at the gold letters he uses for his name… 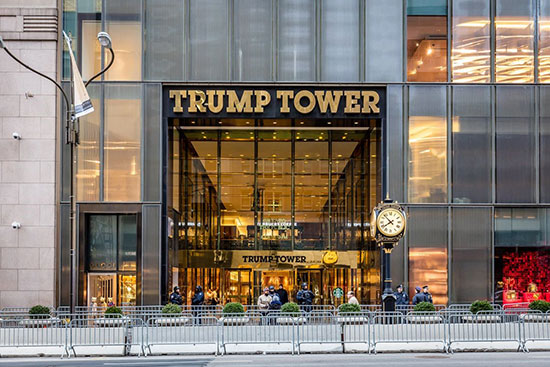 Trump has also made a killing as a gold investor.

After the U.S. government legalized private gold ownership in 1975, Trump was an aggressive buyer. He bought in at around $185 an ounce. Then, as he’s noted:

In September 2011, Trump accepted gold bars as a security deposit from a commercial tenant. That tenant was APMEX, one of the largest precious metals dealers in the U.S. 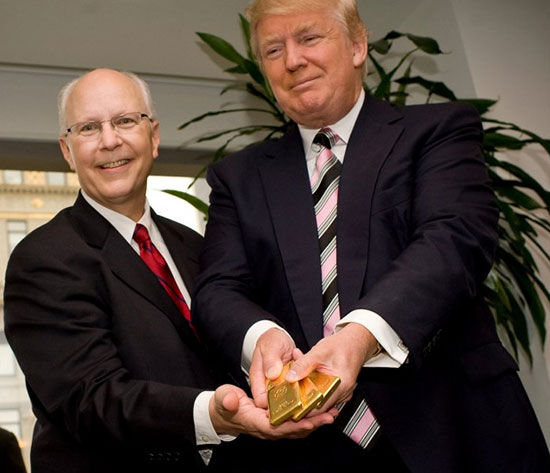 Trump went on to say:

The Trump Organization has always strived to be ‘the gold standard.’ We welcome APMEX as our tenant at 40 Wall, a prestigious and historical location. The legacy of Gold as a precious commodity has transcended to become a viable currency and an accepted universal monetary standard. Central Banks around the world are holding Gold as a reserve asset. It is also a terrific, potentially lucrative diversifier in a portfolio, especially with such volatility in the stock market.

But Trump’s affinity for gold goes much deeper. I encourage you to watch this largely unknown video clip from 2015. At the 0:39 mark, then-candidate Trump says:

Bringing back the gold standard would be very hard to do, but boy, would it be wonderful. We’d have a standard on which to base our money.

He echoes this sentiment in this video here, at the 17:40 mark:

Interviewer: Can you envision a scenario in which this country ever goes back to the gold standard?

I highly suggest watching these videos. You can see Trump’s enthusiasm when he speaks about gold and the gold standard.

Together, this shows that Trump is open and possibly eager to return to the gold standard…

This is important. Because the “everything bubble” is going to burst on his watch.

I think it will create a crisis unprecedented in living memory.

And the globalists will use it to make the final push for a world central bank. They will also try to push out the dollar as the premier reserve currency and replace it with the SDR.

Returning the dollar to a gold backing is the only way Trump could hope to stop this. I think he knows that.

Whether a new gold-backed dollar or the IMF’s SDR wins out is the $64,000 question. And it will be for the next year or so.

But one thing is certain. Either outcome will be very good for the dollar price of gold and gold mining stocks.

The last time the international monetary system experienced a paradigm shift of this magnitude was in 1971, when President Nixon severed the dollar’s last link to the gold standard.

After that, the dollar price of gold skyrocketed over 2,300%.

Today, gold is still bouncing around its lows. Gold mining stocks are still very cheap. I expect returns to be at least as great as they were during the last paradigm shift. The time to get positioned is now.

P.S. For the first time in our history, we’re about to witness the most devious plot against our country and a sitting U.S. president…

You see, President Trump stands in the way of the “elite establishment”… a connected group of powerful individuals who control the decisions of elected officials. And our research points to a “doomsday conspiracy”… one that will crash the U.S. stock market and the American economy down to “ground zero” by mid-2019…

If you want to learn how to protect your wealth… your family’s financial future… and profit from what we see coming, we just released a brand-new video presentation with all the details. Go here to view it now.

Are you invested in gold and gold mining stocks in preparation for the looming crisis? Are you protecting yourself in other ways? Let us know at [email protected].