Justin’s note: Bitcoin has broken down.

It fell below $6,000 last week, after trading in an extremely tight range for months. And it’s been in free fall ever since.

Naturally, this has a lot of cryptocurrency investors worried… including many Casey Research readers. So I got our in-house cryptocurrency expert Marco Wutzer on the phone to see what he thinks about this sell-off.

Marco is the editor of our newest advisory, Disruptive Profits. He’s also an early bitcoin adopter. He first bought bitcoin in 2010 when it was trading for less than $2, and has been through several major downturns since then.

Below, Marco shows why the recent drop isn’t a reason to panic – it’s an opportunity to buy…

Justin: Marco, bitcoin broke key support at around $6,000 last week. What does this mean for bitcoin and the rest of the crypto market?

Marco: There was significant support around that level. I was watching this myself in the form of a triangle that was forming as the market came down. It was practically guaranteed that there was going to be a big breakout either to the upside or to the downside. I personally expected the breakout to be to the upside. Obviously I was wrong about that.

Justin: What do you think triggered the recent sell-off?

Marco: A lot of people are wondering about this, because investors always try to come up with a narrative to fit what’s happening in the market. But I think that’s a mistake, because what this really boils down to is that there were more sellers than buyers. That’s all we really know. Everything else is speculation.

The hard fork in Bitcoin Cash – where Bitcoin Cash split into two competing versions – had a lot of drama surrounding it. But this is just a convenient narrative. It doesn’t necessarily have anything to do with the drop in bitcoin.

And there’s another thing about the Bitcoin Cash hard fork… something that gets a lot of attention from crypto investors: chaos theory. Better known as the butterfly effect, chaos theory – in this context – basically means that all the financial markets are connected. We’re in a globally connected financial system. And what ultimately caused that sell-off in bitcoin could have been anything, even something seemingly unrelated.

I should also mention that there was very little volume in the market before the sell-off. And any little thing can move the market when volume has dried up. Of course, we’ve seen huge volume since the sell-off compared to the weeks before – easily five to eight times more volume on all the exchanges.

In the end, we just know that there were more sellers than buyers. That’s why it went down.

Still, it’s important to keep in mind that this is not a time to panic sell, but rather to be buying. This is a good thing for people who understand the big picture and are in this for the long term. It gives us more time to buy more of the best projects and to build our portfolios.

Justin: Any idea how much further bitcoin could fall before bottoming? Do you see strong support anywhere?

Marco: I’m no expert in technical analysis, but there’s some support around $4,600. So, it’s possible that we go toward that area or even lower. But I don’t think we’ll fall to much lower levels in the long term. I do think that if there is another move to the downside, it will be strong and relatively short-lived. After some consolidation, we’ll eventually be ready to move much higher again.

So this might be a final shakeout to get the last weak hands out of the market before the path is clear for a new bull market.

Justin: Got it. And what about altcoins? Do you think this downturn will wipe out some of the weaker projects? Will we also see a flight to quality ones?

Marco: I look at it like a cleansing. And that’s exactly what the space needs.

You see, strong bull markets, like the one we had last year, tend to attract people who run scams and weak projects with little chance of success. But you see much less of that when prices are falling and a lot of crappy projects have already died. There’s definitely going to be more focus on quality.

Anybody who’s looking to raise money right now needs to have a really high-quality project to get funding. And that’s a good thing.

Out of all the projects that have raised money already, it’s now also easier to see which are the high-quality ones. Because now you can see who is pushing forward and focusing on building out their technology, as opposed to crappy projects where you see no development… where nothing is happening.

What’s happening is that as projects get more built out and more interconnected, it’s setting us up for even stronger network effects and for an even stronger bull market once the market finally turns around.

Nothing has changed at all in terms of the overall Blockchain Ecosystem. All that has changed are the prices, and that’s always a temporary thing. Now, prices are going down. And then, sooner or later, we’ll have a turnaround. And it will be a very powerful turnaround because of all the technology that has been built over the last nine months or so.

Justin: Makes sense. This clearly sounds like a buying opportunity for people who’ve been wanting to speculate on cryptos or add to their holdings.

Marco: Yes. Of course, it’s impossible to time the exact bottom. But I will say that I thought the last three months already were a great buying opportunity. And if the market goes even lower, it will be an even better time to buy.

There may be more downside ahead in December, so we might see even better opportunities. But like I said, it’s impossible to time the exact bottom.

For me personally, I have a really big crypto allocation in my portfolio. But as the market keeps going down, I’ll buy even more. And then, when the market eventually goes up again, I lighten up a little bit and rebalance my portfolio.

As for the people who can’t stomach the volatility, I’d say that maybe your allocation to crypto is too high and you’ve got to sell down a little bit. I mean, I’m not advocating anybody take losses, but if you don’t sleep well at night, then you definitely have too much in crypto.

It’s always a good idea to have the kind of allocation where you can look at your investments without emotion, without panicking. And if prices drop even more, then you keep a cool head… and if anything, buy more.

So that’s the key. Every investor has to know their own psychology and has to know for themselves the kind of exposure that they can handle psychologically and emotionally, and act based on that.

Justin: I think that’s great advice, Marco. Looking down the road, do you see any catalysts on the horizon that could get the market out of this rut and fuel the next bull market?

Marco: Of course, I keep an eye on potential catalysts. You can never know what might cause the next bull market. It might be something that nobody had on their radar screen. But there are two narratives that I think are important. One is, of course, the institutional money. Wall Street is getting ready to move into the crypto market. We’re seeing a lot of infrastructure being built in that area, so that is not a question of “if,” it’s a question of “when.” And I think, certainly within the next six months, we’ll see something happen in that area.

The other thing that I watch even more closely is the building out of the Blockchain Ecosystem itself. And there are several big catalysts coming in the first quarter of next year. Several new, next-generation, high-speed blockchains will be launching their mainnets [the fully working version of a new blockchain].

So, a lot of the crypto projects that have been under development, in some cases for years, are having big launches of their technology where it finally becomes available and gets connected to the Blockchain Ecosystem. This could act as a huge catalyst because it will enable even greater network effects, and makes the value proposition of the entire Blockchain Ecosystem even more enticing.

I see nothing but good things ahead for the future of the Blockchain Ecosystem.

Justin: Thanks for taking the time to speak with me today, Marco.

Justin’s note: Marco’s Disruptive Profits service is unlike any other cryptocurrency advisory I’ve ever seen.

Not only does Marco scour the crypto markets to find the highest-quality projects for his readers… he’s discovered a way to generate consistent income payouts from them.

The next “crypto dividend” could come as soon as December 2… Will you be ready to collect? Learn more here.

Thank you for printing this interview. The questions were spot on and the answers were insightful, but scary. We have a very difficult problem to deal with and it will ultimately be dealt with by the people that are involved with these migrants – or should I say future Democrats!

I agree with Doug 1000%… we are in a bad, bad position and Washington must come up with the correct solution.

I was skeptical of this migrant movement into the U.S. However, after reading this article, which explains (at least in the author’s view) why and how this a much larger issue than these people trying to better their lives. The socioeconomic problems that could ensue are tremendous. It was a very educational article. Thank you.

Thank you for your timely and thought-provoking answers to Justin on November 16. I believe you are so “spot on” in your summaries. I personally am concerned about this mode of entry becoming the way for mega-thousands to enter and live literally in/on our streets. Doug, what can I do as a concerned citizen for my fellow citizens who are in the path of these thousands – OUR citizens who have lived and worked hard and are now worried for their families and property?

I do know President Trump is preparing with some huge containment areas, but now we are talking about taking care of these people. And yes, why does it seem no one is going down there and asking questions? “Poor” is not going to be the reason for approved asylum. Thank you for your time.

Recently, Doug held an important meeting with two of the smartest financial gurus in the world.

It’s not often that Doug allows the public to hear what goes on in these meetings. The topics are usually too sensitive for a large audience.

But for the first time ever, Doug’s decided his readership needs to know what was discussed. Click here to sign up for the exclusive, one-time-only broadcast. 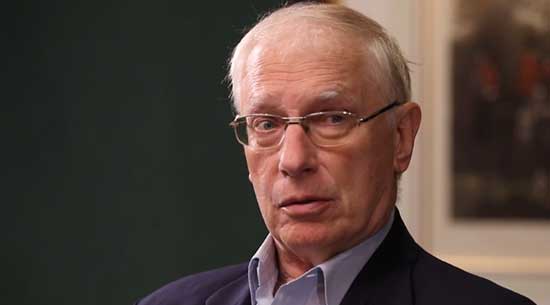