Factors include the spiraling price of natural gas, responsible for a large portion of electricity production.

And these price hikes are results of a supply-demand problem.

Is it gas stations? Oil companies? Or some other entity?

Read on to find out…

And if you want to prepare yourself for the coming winter, when energy prices will surge even higher, make sure to catch the replay of Nomi’s Wednesday event here. She explained the energy crisis in detail… and what you should do to protect your portfolio.

But it’s the amount Amazon is increasing its fulfillment fee by.

Again, this might not sound like a lot. But Amazon ships about four billion items to American households each year.

So that could mean a total increase of $1.4 billion that Amazon retailers will have to shoulder in the coming holiday season.

And this isn’t the first price increase Amazon has hit its retailers with this year.

Fuel is a key driver of Amazon’s costs.

And as I’ve been showing you this week, fuel costs have spiraled. Fuel oil is up more than 75% over the last 12 months, according to the latest Consumer Price Index (CPI) results. And gasoline is up 44%.

So every time you pull up to the pump to fill up your tank… or as you get ready to heat your home this fall… you’ll pay a lot more than you did a year ago. Businesses like Amazon face the same challenge.

The good news is, there is something we – and companies like Amazon – can do to combat rising energy prices. I’ll show you in a moment.

But first, let’s unpack some of the blame that’s been going around for these higher prices. And we’ll identify the real culprit…

U.S. energy prices are already up 33% year over year. That’s according to the July Consumer Price Index (CPI) data released by the Bureau of Labor Statistics.

Of course, the sanctions imposed on Russia since the conflict in Ukraine began are largely to blame for the spike in energy prices.

As are Russia’s counteractions, such as shutting down a key gas pipeline this week, supposedly for maintenance.

But many here in the U.S. are accusing gas station owners of “price-gouging.” This means taking advantage of a difficult situation to profit.

Even President Biden chimed in earlier this summer with a (somewhat misguided) tweet directed at the companies running gas stations:

My message to the companies running gas stations and setting prices at the pump is simple: this is a time of war and global peril.

Bring down the price you are charging at the pump to reflect the cost you’re paying for the product. And do it now.

His tweet had many people scratching their heads. Including founder and chairman of Amazon, Jeff Bezos, who tweeted this in response:

Ouch. Inflation is far too important a problem for the White House to keep making statements like this. It’s either straight ahead misdirection or a deep misunderstanding of basic market dynamics.

And Bezos is right.

You see, it’s virtually impossible for gas stations to “bring down the price” they are charging at the pump. At least, not by enough to make a real difference.

That’s because they have little direct control over that price. They buy their fuel from a wholesaler, who, in turn, buys it from refineries.

Gas stations’ margins are so tight that consumers would hardly notice the difference even if they sold fuel at cost.

In fact, on fuel alone, they have an average margin of 1.4%.

So, let’s say a gallon of gas costs you $3.83. That’s the national average price today, according to the American Automobile Association.

Just over 5 cents of that is profit for the gas station. Presumably, it uses this to cover all its other overheads (including the rising electricity prices I wrote to you about yesterday).

And if gas stations were to bring down the price they’re charging at the pump and just charge at cost, as Biden urged/instructed, you’d still be paying $3.78 per gallon.

While saving 5 cents is nice, it won’t go too far towards helping American households get back on top of their bills.

So if not the gas stations, who is profiting from surging energy prices?

Gas stations weren’t the only ones in Biden’s sights. He also accused ExxonMobil and other Big Oil companies of profiting from high gasoline prices.

He even said ExxonMobil makes “more money than God.” 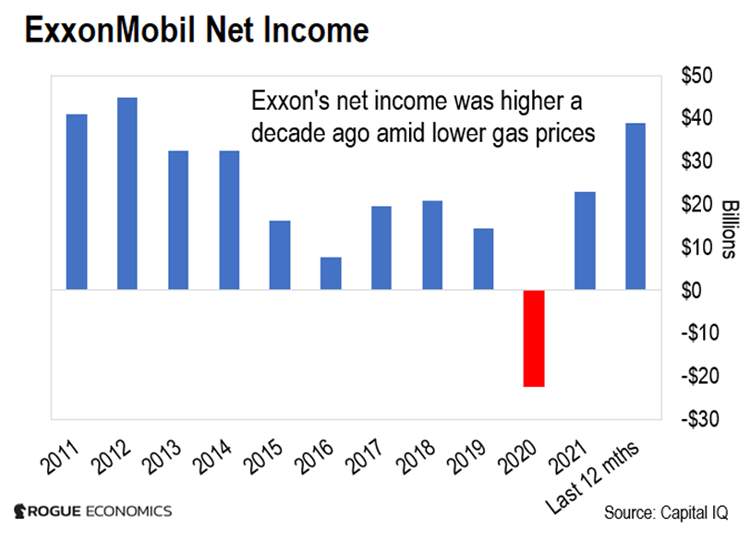 But gas cost much less back then.

Don’t get me wrong, I’m not taking sides here. But here’s the cold, hard truth…

Much like the gas stations, Exxon can’t control oil prices. It only produces about 4% of the world’s oil supply. That’s not enough to significantly impact pricing.

The reality is that oil companies like Exxon are at the mercy of the global marketplace. That’s where the price of oil is set.

And that brings us to the real culprit…

Crude oil is vulnerable to global crises, geopolitics, and wars.

We saw that when Russia invaded Ukraine earlier this year. That conflict thousands of miles away caused the price of WTI crude oil to jump to its highest levels in years.

Oil prices shot up from about $60 per barrel in December 2021 to around $115 per barrel in May 2022 following Russia’s invasion of Ukraine.

They have since dropped back down below $90 per barrel at writing. But the European Union (EU) sanctions against Russia are due to come into effect in the coming months.

The EU gets roughly a quarter of its oil and 40% of its gas from Russia.

So countries in Europe are now scrambling to secure alternative fuel and energy supplies as winter approaches.

This demand and the urgency of the situation are pushing up prices across the globe.

And with fuel oil up 75% and gasoline up 44% over the last year, we’re clearly feeling the effects here, too.

As I showed you all this week, energy prices are destined to rise this winter.

A good way to position yourself for that is with an energy-related exchange-traded fund (ETF).

At my Running on Empty Summit Wednesday night, I did a deep dive into the energy crisis. Thousands of your fellow readers tuned in.

I named the five sectors I believe are set to plummet as the winter approaches and the energy crisis deepens… and five that are set to go up.

I also revealed the details of a small company that could help eliminate fuel and gas costs for Amazon – and possibly the world. And right now, you can get in for less than $1.

I urge you to take a look. I believe it will really be worth your while.

You can watch the replay here.