This is a phrase our colleague and financial journalist Nomi Prins often repeats.

Why? Because the government picks its winners and losers. And it’s already done so for 2023.

Below, Nomi breaks down the five sectors that will benefit this year as new laws go into effect.

These areas will see new funding legislation… with money flowing into related stocks. So if you want to invest in the right industries, make sure you tune into Nomi’s special briefing this Thursday, January 12 at 8 p.m. ET.

She’ll uncover some of the biggest government winners and losers… then give you the name of one stock to buy and one to avoid – for free. Sign up with one click here.

Then, read on for more details about how to follow where the money is going…

I just got some major news from Capitol Hill…

I had a call with a very close contact of mine who is a senior D.C. staffer.

And as I’ll show you in a moment, what he told me could have major implications for your money in 2023.

First, if you’ve been following my writings, you’ll know senior staffers are the ones who get the most done. They’re also the ones who know what’s really coming next.

And these early signals of money flow give us important clues. In particular, insights about how the government picks its winners and its losers.

Because as I’ve said before, where Washington money goes… Wall Street money follows. 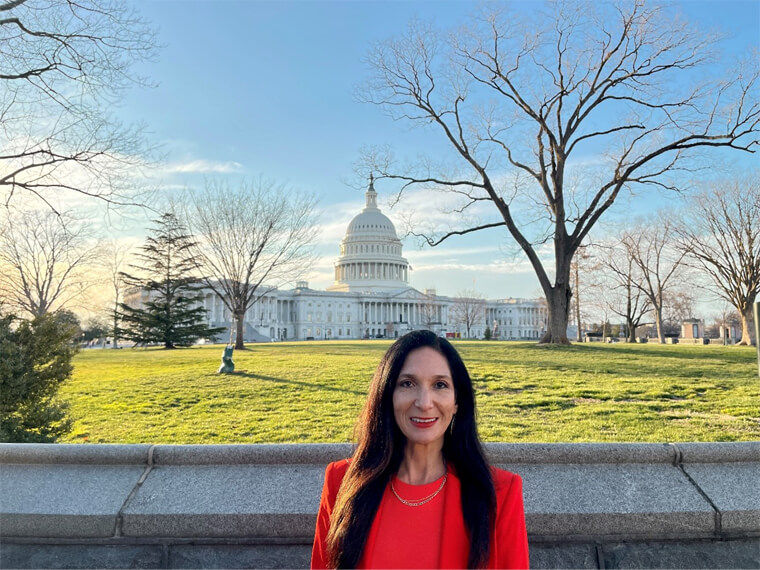 Nomi on one of her frequent visits to Washington, D.C.

Now, I believe our government has already picked the biggest winners and losers of 2023.

Very few people are talking about this. But a new law went into effect a few days ago… A law that Forbes says will trigger “big changes for the economy.”

And if you don’t know what’s really going on in D.C., by the end of the year, you could be the one holding the bag.

I’m pulling back the curtain on a little-known strategy I learned on Wall Street. It will give you a chance to profit from both government winners and losers at the same time…

And, as a “thank you” for showing up, I’ll even give you the name of one stock to buy and one to avoid – for free. I hope to see you there.

Until then, let me share some of what my D.C. contact told me. And I’ll show you how it ties into your money for 2023.

Government Money Is Pouring Into These Five Sectors in 2023

A new Congress began on January 3, and Republicans took charge of the House. Democrats kept the Senate and the White House. And each new session brings with it unique moneymaking opportunities.

My contact told me about five key areas with bipartisan support in this new Congress, once we get past the current drama of who will be Speaker of the House. These areas will see new funding legislation this year.

That means we could see money flowing into related stocks very soon. So you’ll want to keep this list handy…

1) Electricity. My contact told me a lot of money will come into the electricity sector. There will be, and I quote him, “a significant pile of money unleashed to replace and to update electrical grid systems throughout the country.”

He also told me that money will flow into the materials needed to run the electric grid. As well as the materials we need to create new battery and storage systems… and the technology that goes with them.

This is a huge deal for Democrats because they get to build toward renewable sources. It’s also a win for Republicans who support lowering future energy costs.

My contact told me that even anti-nuke Democrats (like Congressman John Garamendi of California) are on board with nuclear energy projects. And so are right-of-center Republicans, like Congressman Thomas Massie of Kentucky. (I know this is a big deal, because I’ve met with him several times.)

Democrats support rare earths because they play a role in sustainable energy, or what I call “New Energy.”

Plus, two big players are making large investments in domestic rare earths: the Pentagon and the Defense Department. That’s because rare earths are also critical for certain weapon systems.

The goal is to make the United States competitive with other nations, like China. That’s because today, China produces and processes almost 60% of global rare earths supply. The chart below shows this… 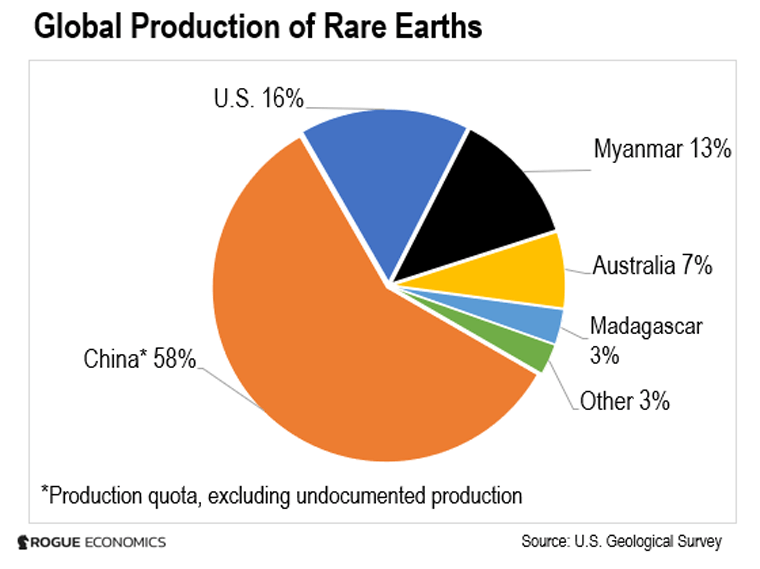 The 2023 National Defense Authorization Act has more incentives to boost rare earths production for all these new weapon systems. And in that context, the Republicans support rare earths, too.

4) Infrastructure. Congress still hasn’t greenlit many items that were already funded by the 2021 Bipartisan Infrastructure Act. (I’m sure you can believe that.) But that’s going to happen soon. We’re going to see bipartisan support to fix commuter corridors, highways, roads, and bridges early this year.

5) The bio-industrial industry. This is one I’m really excited about, and yet the mainstream media isn’t really talking about it.

There will be new funding legislation for research and development in something called biomass. That’s a type of energy that comes from forest debris.

Biomass was huge a few centuries ago. In fact, it was the largest source of total annual U.S. energy consumption until the mid-1800s. Now, it’s only used for 5% of all of our energy.

But based on what my contact on the Hill told me, I would not be surprised if we see a bipartisan bill on the floor by next month.

Profit From the Winners and Losers of This $46 Trillion Shift

Finally, my contact also told me that the days of trillion-dollar-plus bills are over. But we’re going to see more of these bipartisan standalone bills in the first 8-10 months of 2023.

We’ll see standalone bills for water, safety, infrastructure, and broad energy initiatives, like the ones I mentioned.

Then, politicians will shift their focus to the 2024 election. So there’s not much time to get in on this investment curve…

And to set yourself up to profit from what I call the government winners and losers.

See, the five sectors above are only a sliver of the money that’s flowing into the markets this year from the government… and from Wall Street.

In fact, the law that went into effect this month should help the government trigger a historic $46 trillion shift in the market.

And I want to help put you on the right side of that shift. So join me on Thursday, January 12 at 8 p.m. ET (RSVP here with one click).

I’ll uncover some of the biggest government winners and losers. And I’ll give you the name of one stock to buy and one to avoid – for free.

P.S. I’m also hosting a private briefing where you’ll get to ask me your questions. It’s 100% free. And you can ask me about anything on your mind. But there’s a catch: I’m only taking questions from VIP attendees.

Upgrading to VIP is easy, and it’s worth it for all the bonus perks. You’ll get access to a new special report I put together. In that report, I’ll give you my top three predictions for 2023. Plus, as a VIP, you’ll receive complimentary text alerts. That way you don’t miss any of the training videos leading up to my strategy session. So if you haven’t yet, be sure to upgrade to VIP right here.