Justin’s note: Bitcoin is stuck in a rut.

Over the last three months, it’s gone absolutely nowhere. Because of this, a lot of speculators are wondering if the next big move in cryptos will be an explosive rally, or a sharp sell-off.

To help answer this question, I recently got Marco Wutzer on the phone. Marco is the earliest pioneer of cryptocurrencies I know. He’s been involved with digital currencies since the late 1990s—long before bitcoin was created.

And that’s why Doug Casey handpicked him to head up Disruptive Profits, our new advisory dedicated to explosive projects in the blockchain space.

In today’s interview, Marco tells us where he thinks the crypto market is headed next… and the best way to profit when cryptos finally break out of their rout.

Justin: Marco, you’re obviously bullish on the long-term prospects of cryptocurrencies. But can you speak to the current environment a bit?

The market—bitcoin especially—has been trading rangebound for months. What’s going on?

Marco: Right. The overall crypto market is still very correlated to the price of bitcoin. So, most coins rise when bitcoin rises, then fall when bitcoin falls.

This is important because a massive triangle pattern is forming in bitcoin right now. This means we’re getting lower highs and higher lows. 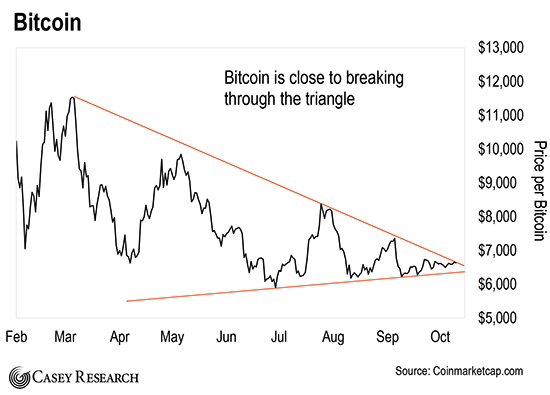 So, bitcoin is like a loaded coil. And I imagine that we’re going to see a big move happen relatively soon. I’d say within the next month, or maybe even in a week or two.

Justin: So… will bitcoin break out to the upside or to the downside?

Marco: I’ve seen just recently, in the last three or four days, that some of the high-quality altcoins—some of the other projects that are not bitcoin—have significantly moved off their lows and have found a more significant bottom. That’s a bullish sign. Disruptive Profits subscribers that invested in “The New Ethereum” are already up over 50% in less than two weeks.

I also think that we’ve had enough time in the last nine months or so to work out this excess from last year’s bubble. So, I think the next breakout will be to the upside again. Then we’re in the next bull market.

Justin: Got it. So how long do you think it could take the crypto market to reach new highs? In other words, when could the market surpass its previous peak valuation of around $830 billion? And what gets us there?

Marco: I think we’re going to see a new all-time high sometime next year. People are always looking for a narrative, or a reason for why the market will go up or down. But the answer in the end is very simple.

The market will move higher when there are more buyers than sellers. When the opposite happens, the market goes down.

Right now, we’ve come down so much that there are more marginal buyers than marginal sellers. The people that got in over their head at the top, they most likely have already sold, pretty much all of them.

Justin: How important is institutional investor interest at this point? Do major institutions need to step in as buyers? And how much of the market’s strength hinges on a bitcoin ETF getting approved?

Marco: There’s been work on the ETFs for institutional capital to get into the market. The Winklevoss twins just got insurance coverage on their crypto exchange.

A lot of people focus on these ETFs. But I don’t personally look at this at all because the blockchain ecosystem must stand on its own feet.

In the end, something like that is just a bridge from the old financial system to get into the blockchain ecosystem. And this new ecosystem itself is what counts, not what a legacy financial institution or a financial system is doing.

Of course, the blockchain ecosystem is still very small in terms of overall market cap. So, a bitcoin ETF can become a big catalyst because it gets big money flowing into the asset class.

At the same time, there are many new exchanges under development in many different areas in the world. For example, Binance is building a fiat-to-crypto exchange in Kenya.

It’s really a global thing. There are so many exchanges now and so many new companies and offerings that enable retail investors to more easily exchange their fiat currencies for cryptos. That can also start as a trickle and become a huge stream and kickoff the next bull run.

But what counts in the end, for me, is the blockchain ecosystem itself—that it develops and that the different pieces integrate with each other more. And that it provides more value that, in the end, will lead to serious user adoption.

Justin: What do you think the next bull market in cryptos will look like? The last one was almost entirely driven by retail investors. It sent good coins skyrocketing, but we also saw explosive rallies in obvious scam coins.

Marco: A rising tide lifts all boats. But you always have to focus on quality projects. Then, it’s not just the bull market alone that will do something for you.

This puts you in a better long-term position. And that’s what really counts. That’s how you can get truly wealthy in cryptos.

So, the key is to find projects that will see real world adoption. And that all boils down to the usability of the service that it provides. Does it actually provide something valuable? Then you need to get people to use it.

These are two things that matter in the long term.

Justin’s note: In his Disruptive Profits newsletter, Marco uncovers the most promising blockchain projects in the space today… many with the potential to become 300-baggers. I highly recommend this letter for anyone looking to take advantage of the rise in blockchain technology.

You can access all of his actionable recommendations with a subscription today. Learn more here.

Today, a reader weighs in on our recent oil update…

Hi, Justin—I enjoyed your letter on world oil and future pricing. Nobody (except maybe the Chinese) looks at the long term anymore. Trump’s sanctions on Iranian oil just keeps their resources in the ground while the world runs out of its reserves. When Russian, Saudi Arabian, and US production tapers off, the only nation capable of multimillion-barrel oil production may be Iran… who will then be in position to do a little sanctioning of its own. Prices may go a LOT higher than $100.

Next week, Doug Casey will be presenting at a two-day investment conference in Bermuda. But you don’t have to hop on a plane to hear him speak. See how you can watch a livestream of Doug, as well as your favorite Casey Research editors, right here.