The world’s most valuable publicly traded company is flirting with a bear market.

Apple is a company that needs no introduction. In August, it became the first publicly traded company with a $1 trillion market value.

But it didn’t stay above the $1 trillion mark for long.

Apple has plunged 18% since October 3. If its share price falls just $7, Apple will officially enter a bear market. (This happens if a stock falls 20% or more from its previous high.)

If and when this happens, rest assured you’ll hear about it. It’ll be one of the biggest stories in the investing world.

Some pundits might even tell you to load up on Apple stock while it’s cheap.

But I’d think twice about doing that if I were you. The huge Apple sell-off is just one of many red flags that we’re seeing…

• FAANG stocks overall are getting crushed…

FAANG is one of today’s most popular investing acronyms.

And that’s a big reason why these companies are so dominant. It’s also why FAANG stocks have been some of the best investments in recent years.

Take Facebook. Before volatility came storming back in July, it was up 124% over the past three years. Amazon was up 252% over the same period. And Netflix and Google were up 232% and 95%, respectively.

Those are tremendous gains. But as regular readers know, nothing goes up forever…

Netflix had a P/E ratio of 184. And Amazon traded for as much as 208 times earnings.

Those are off-the-chart valuations, even for the dominant FAANGs.

So it wasn’t surprising that these stocks got pummeled when the market went “risk-off” in October.

• Netflix plunged 32% from its highs…

Now, I realize that it might be tempting to buy these stocks at such cheap discounts. But we should see even better bargains in the coming months.

I say this because, like Apple, the rest of the FAANG stocks still aren’t cheap according to traditional valuation metrics. In the case of Netflix and Amazon, they’re still ridiculously expensive (both at 94 times earnings).

But that’s not the only reason I suggest not buying this dip.

• Investors have gone on the defensive…

This fund holds stocks like Walmart, Coca-Cola, and Walgreens. In other words, it invests in companies that sell goods and services that people buy no matter what’s going on with the economy. 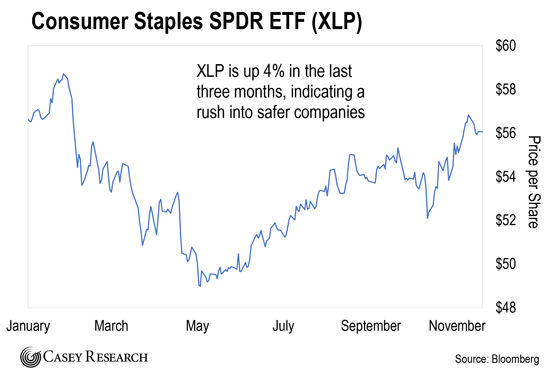 You can see that XLP is up 4% over the last three months. The S&P 500 is down 3% over the same period, while an equal-weighted FAANG index is down 14%.

This tells us we’re seeing a flight from risky and expensive growth stocks to defensive names. And I expect this to continue.

• XLP is still firmly in an uptrend, despite the recent broad market sell-off…

You can’t say the same about the FAANG stocks – especially Netflix and Facebook.

Plus, consumer staples stocks are also cheap. XLP is trading at a P/E ratio of just 15.36. That’s a fraction of what the FAANG stocks trade at.

But perhaps most importantly, consumer staples are exactly the kinds of stocks you want to own when the broad market is plunging… or when the economy’s against the ropes.

Just consider what Walmart did during the last financial crisis.

Walmart did well during these tough times because it sells food, clothing, and other basic goods at low prices… People shop at Walmart even when the economy is in the gutter.

And it’s not just consumers that helped Walmart. Investors also loaded up on Walmart stock during the financial crisis. In 2008, its stock jumped 18%. That same year, the S&P 500 plunged 37%.

If history’s any indication, these stocks should do just fine if we go through a major correction – or worse.

You can easily do this by buying XLP. This fund invests in a basket of big consumer staples names. And that makes it a relatively low-risk way to bet on the sector.

These names aren’t as sexy as Netflix or Amazon. But these companies and their shares should do just fine if the broad market continues to struggle.

Do you agree that Apple and the other FAANGs have more room to fall? Let us know at [email protected].

Whether bitcoin goes up…

You can still get paid. And you can collect the next payout as soon as December 2. Click here to find out more about this little-known strategy, which we’re calling “Upgrade Windfalls”…