A lot of people don’t realize that the Great Depression is largely responsible for the mass electrification of the U.S.

One recovery initiative – signed into law by President Roosevelt – got the economy back on track, rescued markets, and helped millions of Americans.

Today, 90 years after the worst market crash in history, the government is using a similar move. And if you get in early… you could set yourself up for huge gains.

I’ll show you how in a moment…

I’m Konstantin Ogurchenkov, and I’ve been a Casey Research analyst since 2015. I’ve worked under great newsletter editors and investors like Louis James, Doug Casey, and for the past several years, Dave Forest and John Pangere. (In fact, Dave and I are neighbors.)

I’ve learned a lot from them. And now, I want to share some of what I’ve picked up from the greats with you…

You Would Have Lost Your Job… And 86% of Your Portfolio

The Great Depression was the worst market crash the world has ever seen.

Other crises that are fresh in our memory were less dramatic:

Most of us haven’t faced an 86% stock market downturn… And I hope we never will.

But this crash led to America’s rise in subsequent years…

How Powering Farms Led to Recovery

In the 1930s, when the economy hit rock bottom, the government was desperately looking for a formula to recovery.

Of course, it had to boost productivity to create workplaces… put money into circulation… and lift spending.

Even so, back then, nothing was easy. This was before the internet and wide adoption of energy.

The other half lived in rural lands… where only one out of 10 farms was powered.

The lack of rural electrification was a big hurdle for the economic recovery. But it also made way for a solution that would create jobs and help remote areas.

In 1935, near the bottom of the market, President Roosevelt created the Rural Electrification Administration (REA). It oversaw the powering of rural lands. 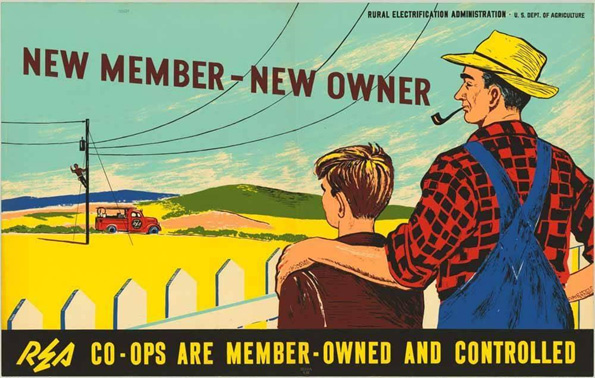 Shortly after forming the REA, Congress passed the REA Act. It put rural lands on the power grid.

The REA Act worked. Soon after, the long recovery began…

Take a look at the chart below: 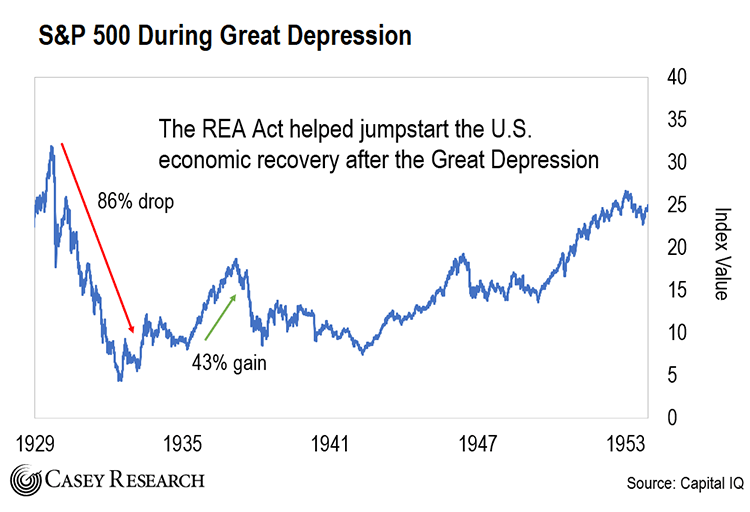 It was the first step towards a big economic recovery and positive market gains.

Keep in mind, building a power grid is extremely labor-intensive (especially back in the 1930s, since they didn’t have access to modern tools).

This massive electrification was the foundation for further growth of the U.S. economy.

And it looks a lot like what is happening today…

A Parallel to Today

Today, the government has a similar goal to power the entire country, steadily run the economy, and keep the market growing.

While electricity is widely available now, it’s not enough to support the growing power needs created by our society… including the rise in electric vehicles (EVs).

Based on the latest data, only 1% of the cars on the roads in North America are EVs. The rest are still run by internal combustion engines (ICEs).

In the next couple of decades, EVs will eclipse fossil-fueled cars.

To make it happen, the U.S. needs 55 million EV chargers. That’s 37 times more than we have this year (118,000), requiring a major upgrade to the existing power grid.

President Biden already assigned $7.5 billion to the EV grid… And as I mentioned yesterday, industry insiders expect another $75 billion in funds from the private sector.

This is the big plan for the next couple of decades, which will bring large gains to early investors.

Our Way to Profit

I pointed to the Global X Autonomous & Electric Vehicles ETF (DRIV) in yesterday’s Dispatch. It has $1.3 billion in assets and follows a basket of EV-related companies.

It’s a simple investment tool that links to the coming EV boom. It’s up 27% this year.

Yet, at Casey Research, we prefer individual picks that can beat indices and ETFs.

So you should also consider the inputs needed for such a massive change to the power grid… as well as the rise in EVs.

Battery metals like lithium and nickel are set to be huge beneficiaries, as well as EV charging companies.

If you have access to our advisories by Dave Forest and John Pangere, then you likely have some big winners already. You can get in on that right here.

As always, do your due diligence… invest small amounts, and never invest more than you can afford to lose.