“Interest rates are too high.”

After all, the yield on the 10-Year Treasury is just 2.7%. That’s less than half its historic average.

And don’t even get me started on savings accounts. They pay next to nothing these days…

But I’m not the one who thinks rates are too high. James B. Bullard is.

I actually think we’re a little bit tight here, a little bit too high with the rates… But I’m in a minority view compared to the committee.

Now, Bullard may claim that he’s alone in his thinking. But I don’t buy that.

After all, the Fed reversed course last month when it said it would be “patient” with raising interest rates.

Keep in mind, the Fed was in the process of “tightening” its monetary policy until it issued this statement. It had raised its key interest rate nine times since the end of 2015. It also talked about hiking the key interest rate two more times in 2019.

But that clearly isn’t happening anymore. And there’s an obvious reason why…

In fact, the S&P 500 just had its worst December since the Great Depression.

This led the Fed to do an “about-face.”

Of course, the Fed didn’t admit this at the time. Instead it said Brexit, the global economic slowdown, and the trade war were why it paused raising rates.

Even Bullard now admits that the December sell-off spooked the Fed. He had this to say at January’s FOMC meeting…

I thought at the December meeting, myself I thought it was a step too far. I argued against that move…We did get a bad reaction in financial markets. I think the market started to think we were too hawkish, might cause a recession.

It’s the sign of a market that’s hooked on easy money.

Ever since the Fed lowered interest rates to near zero after the 2008 financial crisis, the market’s been used to buying stocks on cheap, borrowed money. We at Casey Research think it’s what caused the bull market of the last decade… And what’ll soon bring it crashing down.

Still, it’s clear the Fed has the stock market’s back now. And that has huge implications for stocks.

It could even set up a huge opportunity for a special kind of stock. I’ll get to what that is in just a minute.

It appreciated 10% against a basket of major currencies between February and December.

That’s a huge move for a major currency. But that rally came to a standstill recently.

And that’s because the U.S. dollar is no longer the best place to park money. That, again, is because the Fed is putting its rates on hold, which makes the dollar less attractive relative to other major currencies.

In short, the change in the Fed’s tone is bad for the dollar.

• The market is already “pricing in” a weaker dollar…

It shows the performance of the U.S. Dollar Index (DXY) since the start of 2017. This index tracks the dollar’s performance against major currencies like the Japanese yen and the euro. 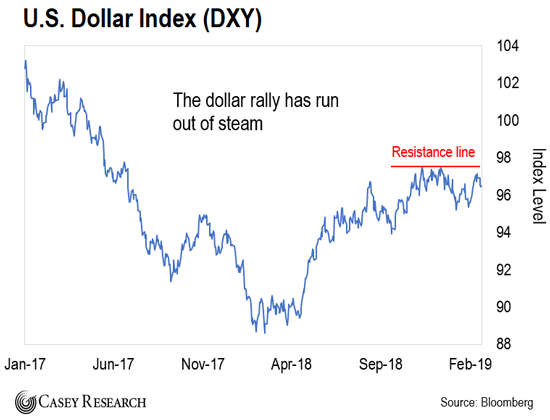 You can see DXY has been bumping up against resistance at around 97. This suggests that the dollar will stop appreciating. It could roll over any day now… and head much lower.

• I’m not the only Casey analyst betting on a weak dollar, either…

Strategic Investor editor E.B. Tucker says the dollar is “on the cusp of another plunge.” And that’s because the dollar hasn’t set a new high in years.

This is bad news for everyday Americans, especially globetrotting ones like myself. It means the money in our wallets won’t go as far.

But this is very bullish for commodities.

You see, most commodities are priced in U.S. dollars. So they tend to have an inverse relationship with the dollar.

You can clearly see this below. The green line on this chart represents the U.S. Dollar Index. The black line tracks the Invesco DB Commodity Index Tracking Fund (DBC). You can see that commodity prices tend to zig when the dollar zags. 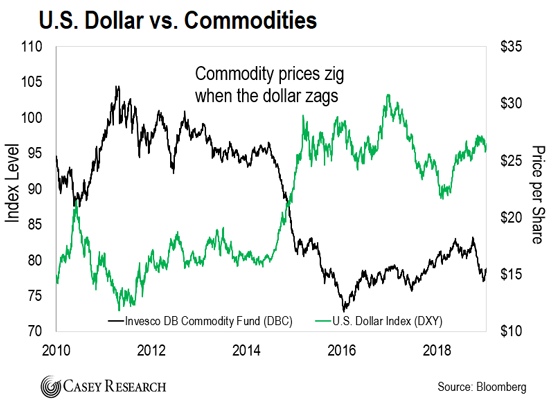 Now the question is, “What commodity should we speculate on?”

• After all, many commodities could skyrocket, should the dollar significantly weaken…

But I think gold will emerge as the biggest winner…

Think about it. Gold is a hedge against financial chaos. Investors buy it when they’re nervous about the economy or the stock market.

And the Fed basically came out and said that the market and economy could topple if the easy money stops flowing.

In short, gold stands to benefit from a weak dollar and growing demand for safe havens.

That’s because gold stocks are leveraged to the price of gold. So gold doesn’t have to jump much for their shares to soar.

And we’re seeing this play out before our eyes…

Just look at this chart. It shows the performance of the VanEck Vectors Gold Miners ETF (GDX) – which invests in a basket of gold stocks – since the stock market peaked in September 2018. 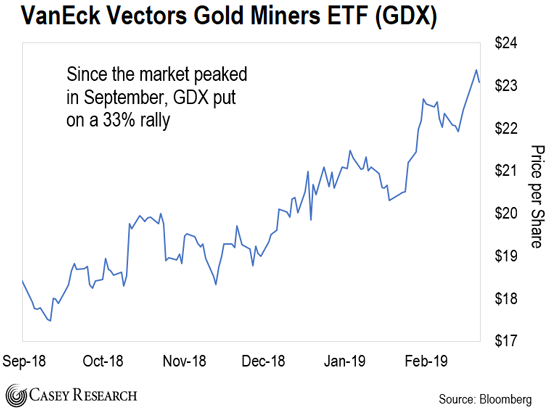 • E.B. says gold stocks are just getting warmed up…

He would know, too.

E.B. sits on the board of a publicly traded gold royalty company. He’s a true industry insider.

I got E.B. on the phone earlier this week to hear what he’s seeing from the front lines. Here’s what he had to say:

A lot of positive things are happening in the gold space right now. But I need to clarify what I mean by “positive.”

To me, it’s positive when bad things are happening. These things often signal that the market is about to turn, that the situation’s about to improve.

In that sense, we’re seeing a lot of positive developments in the gold mining space. For one, things have gotten so bad in the space that six of the 10 biggest mining operations have combined with each other, and not at steep premiums.

• In other words, this wave of mergers could mean gold’s about to turn the corner…

It’s very different from what we saw at the top of the tech boom when the CEOs of giant tech companies shook hands and then fought over which company’s name comes first on the new stationary.

Today, the complete opposite is happening in the gold market. It’s merge or fail. That tells me the market is firming up and getting ready for a launch.

• So consider speculating on gold stocks if you haven’t yet…

You can easily do this with GDX. This fund invests in a basket of gold mining stocks. That makes it a relatively safe way to profit from a rally in gold.

Just remember that gold stocks are highly volatile. Treat them like a speculation.

Only bet money that you can afford to lose. Take profits when they come. And don’t be afraid to cut your losses should the gold market reverse direction.

P.S. E.B. is famous around Casey Research for his track record of nailing big calls…

He still makes a 20% passive income stream from the moves he made right after the 2008 housing crisis. And last year, he strategically avoided Bitcoin’s collapse… while making a 15,000% profit on a blockchain mining deal.

In short, E.B. knows how to spot trends… and make the right moves to book huge profits.

Next Wednesday, February 27 at 8 p.m. ET, E.B. will hold a special presentation he’s calling The Stock Market Escape Summit. There you’ll learn all about his top investing strategies for 2019… how he knows when it’s time to be a contrarian… and about a little-known type of investment that generates 10x more money than options – with lower risk.

Today in the mailbag, readers respond to Casey Research founder Doug Casey’s recent essay on how to get money and keep it…

Many gave thanks and high praise…

Doug, I thoroughly enjoyed Friday’s article. Much insight and clarity for me. I’m at the age where these issues are more and more on my mind. Thanks for this, and all that you do for freedom loving individuals.

Doug, this is probably the finest newsletter you have ever written. I will share your cogent philosophy on wealth with as many people as will listen. Thanks!

But some don’t agree with Doug’s controversial advice…

I do agree with most of what Casey says about what to do with my money in this article however I strongly disagree about not giving to charities. Yes, there are a lot of scams out there, just as there are scam investment “gurus” but you have to be very selective and diligent about who you give to.

True Christian churches perform wonderful help to needy families who just need help and take a load off government resources. No matter what you believe this country was founded on Christian principals and has provided the freedom to pursue and gain wealth. It saddens me to hear Casey’s recommendation to not give to a worthy charity.

Where do you weigh in on giving to charity? Is it a productive use of your wealth? Or does it do more harm than good, as Doug says?

As always, send your responses, comments, and questions to [email protected].