Rachel’s note: Right now, everyone is panicking about inflation.

What’s more… the Fed recently threatened to cut back on its money-printing measures. As a result, many stocks sold off aggressively.

But our friend Eoin Treacy at Rogue Economics believes that all signs point to lower inflation in the near future.

Eoin Treacy is a career analyst, writer, strategist, commentator, and lecturer. He’s known around the world for his knowledge of asset classes, sectors, and thematic investing.

Today, Eoin shows us why we’re nearing peak inflation – and what it means for investors…

Inflation is the buzzword of the day. But what does it really mean?

Official inflationary measures are higher today than they’ve been in years. Year over year, the Consumer Price Index (CPI) is running at 7%.

Why is inflation so much higher now than it was before the pandemic? And how much longer can that last?

I believe we’re close to a peak in inflation. In today’s essay, I’ll give you the top reasons why. And I’ll show you how to navigate it in today’s market.

What Peak Inflation Means for Cars and Semiconductors

We’re seeing signs of peak inflation in the car industry.

There is no doubt the pandemic upset the global supply chain. Car companies, for example, are lowering production rates.

That’s caused a huge increase in used car prices. It also means there are millions of people with cars on old leases waiting for new vehicles to trade them in for.

As you likely know, we’re in the middle of a semiconductor shortage. This is affecting the ability of car companies to keep up with new orders.

When the semiconductor shortage eases and old leases expire, there will be a glut of cars that need to be sold. By the end of this year, used car prices should be coming back down. That’s deflationary.

By the middle of 2022, the worst of the semiconductor shortage will be over. That will allow factories to speed up their manufacturing… and shortages will ease up.

What Peak Inflation Means for the Housing Market

But the car industry isn’t the only one feeling the effects of inflation.

Bond yields have also risen higher. Investors believe if the Federal Reserve doesn’t do anything, inflationary pressures will become a problem.

Even so, the Fed only has to raise rates by 0.25% once or twice to get the result it wants. Bond yields are already too high and could soon begin to come back down.

Right now, we’re looking at more than four 0.25% hikes this year. But as I see it, that’s not even close to realistic. Either way, rate hikes from the Fed could affect today’s hot housing market.

Consider the Freddie Mac conforming 30-year mortgage rate. It tracks the mortgage rate available from government-backed lenders. It bottomed in January 2021 at 2.65%. As I write, it’s 3.56%.

What does that mean for the housing market – and for homeowners?

If you buy a medium-priced home, you now need $192 more a month than a year ago. And that’s before property taxes.

Another way of thinking about it is you need an extra $2,300 a year, in net income, to afford the median-priced home. That’s taking money away from other spending, which is also deflationary.

If I’m correct that the bond market is overreacting to inflation, then mortgage rates should peak soon, too.

As the Federal Reserve reduces its monetary assistance, the supply of new money will fall further. That should decrease price inflation in properties.

Take a look at the chart below. It shows the S&P CoreLogic Case-Shiller 20-City Home Price Index, year over year. 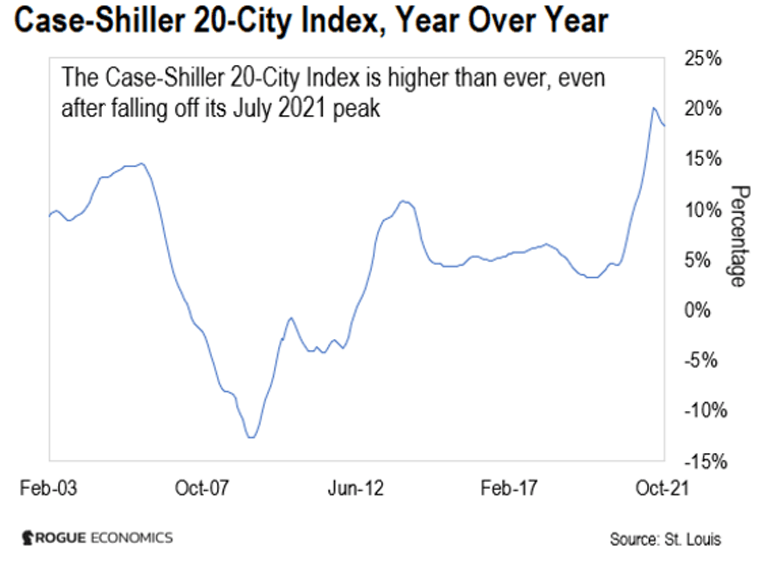 This index tracks real estate prices in the 20 largest cities in the U.S.

As you can see, it peaked in July at 20%, but it’s still at its highest level on record. If home price inflation falls, that will take some pressure off wage growth, too… since people are demanding higher wages to afford the rise in housing prices.

And we’re already seeing signs of a slowdown in home prices.

All Signs Point to Lower Inflation Ahead

Despite the current market, all signs point to lower inflation in the near future.

Take a look at this long-term chart of the CPI. It’s very choppy. Periods of weak inflation follow periods of strong inflation. 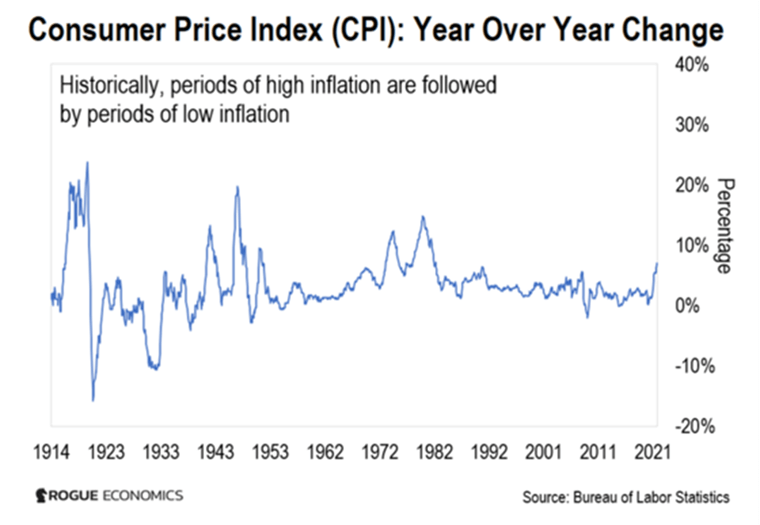 Even during the Great Inflation of the 1970s, there were many swings in inflation. Every time inflation spiked, it bottomed at a higher level.

I’m expecting something similar for this decade.

Although, I don’t think we will go back to the low official inflation readings from before the pandemic.

After the coming peak in inflation, I expect it to hold higher average levels than before the pandemic.

Right now, everyone is panicking about inflation, so we are nearing a peak. Many of the stocks that rely on low interest rates sold off aggressively.

This is a sign of the distortion between the markets and the real economy, which our editor Nomi Prins has identified.

As Nomi has shown, the stock market is addicted to cheap money. When it’s abundant, prices rise. When there are signs the Fed might remove it, prices fall.

The Fed recently threatened to cut back on its money-printing, so we saw a lot of selling.

Now, if you’re invested in the markets, especially tech stocks, you’re probably worried about this selling. But we don’t expect it to last long.

When the market wobbles, it scares policy makers. They will soon kickstart the money-printing machine – or at least, they will put on hold certain rate tightening plans. Then prices will begin to recover.

In fact, to me, the current inflation panic suggests we are very close to a new buying opportunity.

I’m watching the ARK Fintech Innovation ETF (ARKF). It tracks companies across the technology spectrum that are front and center of the greatest tech trends of our time.

The ARKF fund has more than halved in the last year. It is still falling, so I’d wait for the first good upside day before jumping in. It should do well when traders are less worried about inflation.