Editor’s note: While the mainstream continues to ramp up mass hysteria around the pandemic, here at the Dispatch, we’ve been staying calm and rational – and looking at the facts rather than panicking over the latest headline.

That’s why today, we’re bringing you this piece from tech expert Jeff Brown. He’s been tracking the COVID-19 pandemic from day one. And he’s cut through the hysteria by sharing his own research on the pandemic.

In fact, Jeff thinks these volatile times are presenting great opportunities for investors. Last Wednesday, he shared one of these opportunities in a special presentation. Go here to learn more.

Then, read about the latest breakthroughs in the battle against COVID-19, including promising developments on a vaccine…

Last week, I wrote about a study out of the University of Oxford.

It estimates that somewhere between 36% and 68% of the British population have already contracted COVID-19.

I suspect the same is true in the U.S. and many other countries that are widely engaged in international trade and tourism.

We’re closer to “herd immunity” than most people think. And the death rate from the virus is a lot lower, too.

In December, January, and February, 759,493 people entered the U.S. from China. Only about 228,000 of those were Americans returning home.

The rest were Chinese citizens traveling for business, school, or tourism. That’s more than 530,000, many of whom may have contracted COVID-19.

Let’s assume the number of infections is doubling each day – one person will infect two people, then those two infect four people the next day, and so on. By day 28, more than 200 million Americans will have contracted COVID-19.

That’s how fast it happens.

And although every death is a tragedy, there have been 22,154 deaths from COVID-19 in the U.S. so far. That’s a tiny fraction of the number of people that are likely already infected.

Here’s my prediction: We will not reach anywhere near those levels with COVID-19.

Even Anthony Fauci, the top immunologist in the U.S., is starting to change his position.

He admitted there’s a chance the total number of deaths from COVID-19 in the U.S. may fall below his lowest estimate of 100,000.

We’ve come a long way from the prediction of 2.2 million deaths from the Imperial College London study.

And as we’ll see below, the private sector and academia are focused on developing a therapy, supporting testing, or finding a vaccine to manage the effects of COVID-19 the world over.

More Than 250 Clinical Trials… and Counting

There are now over 250 clinical trials exploring vaccines and treatments for COVID-19, with many more in the pipeline.

The positive and proactive actions being taken by the private sector, academia, and the government are unlike anything we have ever seen before.

These efforts will make the world far better prepared for the next outbreak in the future.

Something I’m watching closely is the new vaccine for COVID-19 the University of Pittsburgh School of Medicine just announced.

Normally, we would expect to hear such an announcement from a biotechnology company. But the Pittsburgh School of Medicine is experienced in this area.

The team of scientists there did extensive research on MERS in 2014 and SARS back in 2003.

Both of those coronaviruses were similar to COVID-19 in structure.

It appears the team at Pittsburgh is on to something.

The Lancet, one of the leading medical journals, just published their research. That makes this one of the first proposed vaccines to have been peer-reviewed.

What’s unique about this vaccine is the delivery mechanism. It uses what’s called a microneedle array to deliver the therapy.

It’s a small patch the size of a fingertip that has 400 tiny needles on it. Think of it like a small bandage you place on your skin.

Then the tiny needles deliver the therapy over time. This teaches the body how to produce antibodies to fight COVID-19. 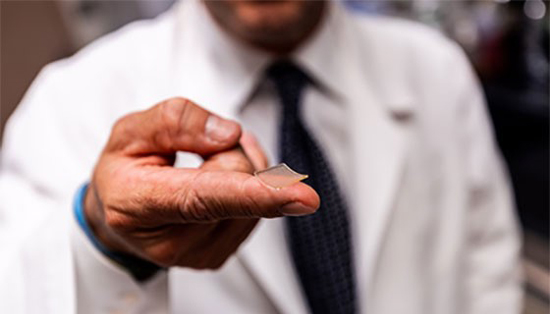 This delivery isn’t painful. Four hundred needles may sound scary, but they are small enough to all fit together on a fingertip. You’ll hardly feel it.

The great thing about this approach is that microneedle arrays are easy to mass-produce and simple to administer.

People don’t need to worry about getting an injection to get the vaccine.

Instead, they just need to put on a small “bandage.”

This ease of use will help speed up adoption tremendously if the vaccine makes it to market.

P.S. Last Wednesday, I hosted an investing summit to talk about why 5G is such an incredible investment opportunity right now. And I revealed my top 5G stock picks to get in on this trend.

We’ve seen a major market pullback as a result of the COVID-19 pandemic. But the build-out of 5G networks hasn’t slowed in the slightest. In fact, it has sped up, with so many people now so reliant on their smartphones and wireless networks to keep in touch with the outside world.

President Trump went so far as to release a paper called the “National Strategy to Secure 5G.” He says new technology will change the way we live, work, learn, and communicate. This is exactly what I’ve been saying for several years now.

5G stocks have pulled back significantly. But the 5G build-out is accelerating. That’s the kind of setup every tech investor should take advantage of.

If you missed my summit, don’t worry. Just go right here to watch the replay, before it’s taken down.