I double-checked the bill.

It was correct. The dinner cost just $92. That’s for five people… and that figure includes two bottles of wine and dessert.

This was my experience in Cafayate, Argentina. If you read the Dispatch last week, you know I went there to catch up with Doug Casey.

Doug and I talked about everything from the legal marijuana market to the new book he’s working on. He also told me about the time he met former Vice President Dick Cheney… and refused to shake his hand.

We also enjoyed some nice dinners together. And I was blown away by how cheap the food was at every restaurant.

I didn’t just observe this in Cafayate, either. It was the same story in Salta.

• Every meal I had in Argentina last week was incredibly cheap…

Now, it’s true: Argentina’s been cheaper than the United States for a while now.

I know because I spent five weeks in Buenos Aires last year. During that span, one U.S. dollar bought 20 or so Argentine pesos.

But it’s much cheaper now. These days, one dollar buys 43 pesos. In other words, the peso’s lost more than half of its value over the past year.

This makes Argentina a great place to visit if you have dollars… like I did.

• But it’s a different story for the people of Argentina…

Inflation is now running north of 50% per year.

This is making life difficult for the average Argentine. Their money doesn’t go as far.

I’m telling you this because the U.S. could experience serious inflation in the years ahead.

Some people will think I’m crazy for suggesting this. After all, the U.S. hasn’t had double-digit inflation since 1980…

But the seeds of a major currency crisis are being sown as we speak. I’ll explain what I mean by this in a minute. And I’ll show you what to do about it.

But I should first say a few words on Argentina.

• Argentina was once the richest country on the planet…

In 1895, the average Argentine was wealthier than the typical American.

Argentina had the world’s fastest-growing economy in the 43 years leading up to World War I.

And Nick would know. He’s lived in Argentina for years. He’s also written extensively about its economic situation.

But Argentina obviously isn’t one of the world’s wealthiest countries anymore. It’s not even among the top 50. It’s number 63.

So what went wrong?

• The “Peronists” rose to power…

Perón put the State at the center of everything. He gave all sorts of freebies and welfare to the poor, known as the descamisados, or the “shirtless ones.” This forever cemented him as an icon among the masses.

Nick’s absolutely correct. Peronists are still a major political force in Argentina. And they continue to see government spending, regulations, and easy money as the solution to every problem.

But years of reckless government spending, borrowing, and money-printing decimated Argentina’s economy. It’s why the Argentine peso is in free fall.

But Macri, along with the rest of Argentina, is learning this the hard way.

Any rational person can see that.

• And yet, a new crop of politicians wants to introduce these policies in America…

I’m, of course, talking about the Democratic socialists.

These people want free Medicare for all. They think college education should be free. They want to abolish student debt and hike the minimum wage to $15. And they want to spend tens of trillions of dollars the U.S. doesn’t have on green energy.

In short, they’re promising all sorts of freebies… much like the Peronists.

Not long ago, a politician with these views wouldn’t have a shot in hell.

• But there’s a good chance that the next U.S. president is a Democratic socialist…

I say this because a recent Gallup poll found that 45% of young Americans (ages 18 to 29) view capitalism positively.

That represents a 12-point decline in the last two years. It’s also worth noting that 68% of young Americans viewed capitalism positively in 2010.

This is a disturbing trend. And it’s likely to accelerate. Take it from Casey Research founder Doug Casey:

When the economy collapses – likely in 2019 – everybody will blame capitalism, because Trump is somehow, incorrectly, associated with capitalism. The country – especially the young, the poor, and the non-white – will look to the government to do something. They see the government as a cornucopia, and socialism as a kind and gentle answer.

Radical socialist ideas are flourishing in the U.S. Top contenders for the Democratic presidential nomination are all calling for more freebies… free medical care, free college, free housing, free food, and so forth.

And those ideas are resonating with the public. More people simply want the State to take care of them. They want a savior, and these politicians are simply answering the call.

• The U.S. doesn’t have the money to pay for these programs…

It’s now more than $22 trillion in debt… and that number grows by the second.

But Democratic socialists aren’t going to let that stand in the way.

They’re just going to print more money to finance their “free everything” economy.

In short, the next U.S. president could unleash inflation like we’ve never seen before.

The best way to do this is by owning physical gold.

As we often point out, gold is real money. It has preserved wealth for centuries.

It has also survived every major financial crisis in history. This makes it the ultimate safe-haven asset. You can learn the best ways to buy and store it in our free special report, “The Gold Investor’s Guide.”

Just don’t wait too long to buy. I say this because gold is already on the move. Just look at the chart below. It shows the price of gold over the last year: 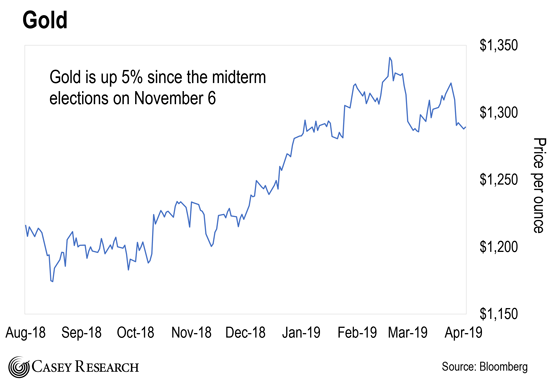 You can see that gold began a strong rally right around the midterm elections in November… when the Democrats took over the House of Representatives.

• You may even want to speculate on rising prices…

The best way to do this is with gold mining stocks. These companies are leveraged to the price of gold. This means when gold moves an inch, this sector can move a mile.

An easy way to buy gold stocks is through the VanEck Vectors Gold Miners ETF (GDX). This fund will give you broad exposure to gold stocks. That makes it a relatively safe way to bet on higher gold prices.

But remember, this is still a speculation. Don’t bet more money than you can afford to lose. It just takes a small position to book big profits if gold takes off like we expect it to.

P.S. Last Wednesday, our founder Doug Casey went on record with his biggest predictions for the fate of America… and gave us details on five new, specific speculations that could deliver 1,000%-plus returns over the next year.

Today’s the last day to get those names… and lock in a 40% discount to Nick Giambruno’s premium Crisis Investing newsletter. Go here for your last chance to get this information and lock in this deal.

Hi from the U.K. Thank you for permitting me to watch the Casey interview, it was very good. Very interesting. He said nothing wrong at all. I am a Yorkshire man and we like straight talking people. He is a good man. Keep up the good work.

Mr. Casey you must get this a lot, but I am like you… Say it like it is, call an apple an apple and an orange an orange. Pull no punches and don’t sugar coat anything. I love your mindset… it works for me. Thank you for sharing.

I love Doug… He reminds me of the ornery old uncle I wish I had. Or, maybe because I can see where my own husband Doug will be in another 20 years. I find his savage observations heartwarming. I really wish I could meet him in person one day.