Rachel’s note: I want to remind readers that tonight, at 8 p.m. ET, our colleague Jeff Brown is hosting an urgent presentation… to discuss what could be the most important tech prediction of his 30-year career.

At the Investment Accelerator event, he’ll pull back the curtain on one of his most ambitious projects yet. And reveal how it could give you the rare opportunity to share in $1 billion in tech profits.

Just go right here to reserve your free spot for tonight. Then, read on for Jeff’s insights on how to spot tech companies that could go exponential…

I’m sure you saw the news…

2020 was a big year for high-profile initial public offerings (IPOs).

Popular companies – especially technology companies – finally made their move after years of being private.

Airbnb – the “Uber of lodging” – finally held its long-awaited IPO in December.

Palantir, a bleeding-edge company that uses artificial intelligence (AI) to extract insight from data, went public at the end of September.

Snowflake, a data management software company, held another highly anticipated IPO. It ended up being the largest software IPO to date.

This is great to see.

It is long overdue for these companies to go public. And at the right valuation, they would be great long-term investments.

But here’s the bad news.

Airbnb, Snowflake, Palantir, and many of the other “hot” stocks being touted in the media are already mature, multibillion-dollar companies.

For instance, Airbnb is 13 years old and was valued at $31 billion during its Series F funding round in 2017.

As for Palantir? The company is about 18 years old. It was recently valued at over $50 billion. And Snowflake was founded back in 2012 and is already valued over $60 billion.

They can still potentially be great investments. But their “early days” of exponential growth are behind them.

And because these companies stayed private, retail investors never had a chance to invest. Venture capitalists and private equity groups reaped all those early returns.

And in many instances, regular investors get burned when they do buy these hyped stocks.

For longtime readers, this will be a familiar topic.

Why is it so hard to invest in exciting companies during their earliest stages of growth? Why has it been so difficult to invest in the “next Amazon”… when the company is still young and the best days of growth are still ahead?

It used to be that the world’s best tech companies did go public early, allowing normal investors to buy shares of these exciting startups on public exchanges.

Amazon itself went public back in 1997 at a valuation of $381 million. That’s walking the line between being considered a micro-cap or a small-cap company.

And, of course, it’s been well-documented that Amazon wasn’t making any money at the time. Everyday investors still had the chance to take a position in what was truly an exciting startup with an uncertain future. 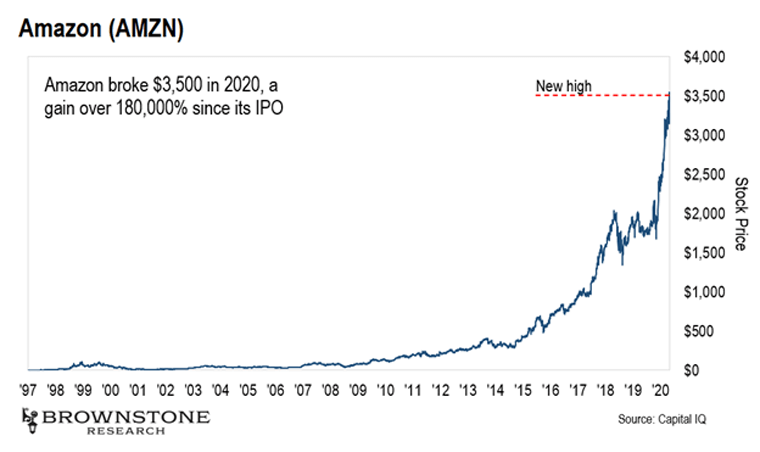 And those who took a chance on Amazon’s IPO got incredibly rich. The stock has gone on to deliver gains as high as 180,000%. That’s enough to turn every $10,000 invested into $18 million. All on a publicly traded stock.

But the sad fact is that this isn’t remotely possible today. Average retail investors have been locked out of the best tech companies. And by the time investors do have a chance to get in, it’s often at absurd valuations.

For example, Uber competitor Lyft went public at a $24 billion valuation in 2019. As I write, the stock is still down about 36% since IPO day.

The We Company, of WeWork infamy, tried to go public at an absurd $47 billion valuation in late 2019. I begged my readers to steer clear of this IPO. Fortunately, the WeWork IPO was shelved, and the company has since shed 94% of its value.

This is not an accident.

Venture capitalists (VC) and private equity firms keep exciting companies private as long as they can because it allows them to capture the majority of the investment upside.

Then, once they’ve gotten all they can, they “foist” overvalued IPOs onto unsuspecting retail investors.

The reality is that normal investors are left with the equivalent of table scraps.

And in some cases, they are buying into companies that are overhyped and way overvalued. Buying in at those levels is a surefire way to lose money on an investment.

So what are investors to do?

The Solution to the Problem

For years, I’ve been on a mission to change the scenario for retail investors, trying to level the playing field.

I’ve done “boots on the ground” research… dug into Securities and Exchange Commission filings… and explored many potential avenues to give my readers an edge. That’s led to some of my most recent ventures like Early Stage Trader and Blank Check Speculator.

And now I want to give all of my readers the opportunity to share in $1 billion of tech stock profits.

How is that possible?

The biggest money in the world is being made in technology. And I’ve developed a strategy to give regular investors a shot at returns like the private investors get. I’m putting all my years of angel investing and tech industry insider knowledge to work on behalf of my followers.

And I’m sharing the specifics… exactly how this opportunity works… at my Investment Accelerator event happening tonight at 8 p.m. ET.

I’d like you to join me as I reveal how ordinary folks can get in on startups with the potential to become the next Amazon.

If you’re interested, please go right here to RSVP and reserve your spot. I’ll see you there!