I nearly spit out my coffee. I like a good morning laugh. But this time I nearly sprayed my desk with my morning brew.

Earlier this week, the White House released its 2023 budget proposal. Remember, the U.S. runs its fiscal year starting in October. So, Congress needs to approve a budget in advance of the fiscal year rolling over. 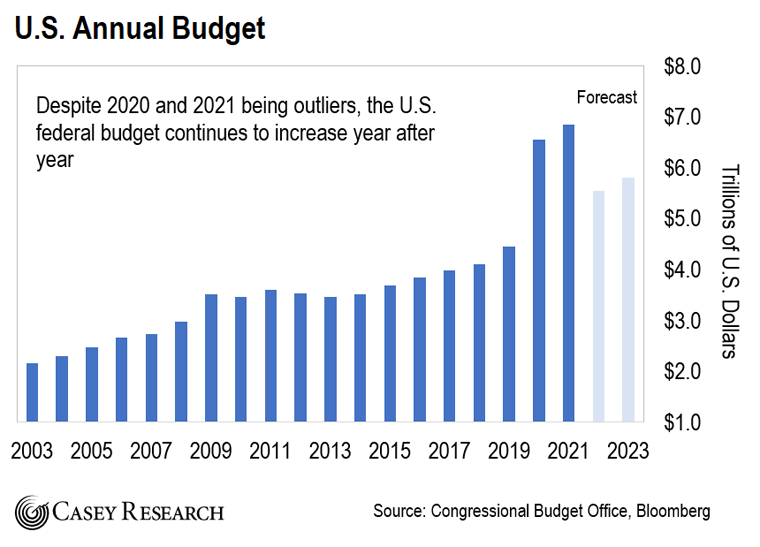 It’s one of the largest proposed budgets in recent history. Keep in mind, the 2020 and 2021 fiscal years are outliers. They include $4.6 trillion in COVID-related expenses alone. That’s about the same amount of the entire 2019 budget.

And that $5.8 trillion for next year doesn’t include any added spending plans that might come up out of the blue.

I’m not surprised. After all, the name of the game in Washington is to borrow and spend. Oftentimes, this results in money going to questionable places.

You only need to look at Senator Rand Paul’s annual waste report for examples. Like the $465,339 to teach pigeons how to gamble with slot machines. Or the $1.3 million to study how “good” or “bad” news makes you happy or sad.

But it’s not the wasteful spending that made me laugh.

If there’s anything I’ve learned over the years, it’s that the words “fiscal” and “responsibility” don’t exist in political circles. That’s true on both the left and the right.

Saying those words after proposing $5.8 trillion in spending is… laughable.

That is, until you realize the increase in spending will probably lead to more inflation. And more pain ahead.

Actions have consequences. That’s true of your everyday life, and it’s true of federal spending.

One way to track this is by looking at U.S. Federal Debt. If you go back to 1980, national debt just about doubles under every two-term president. 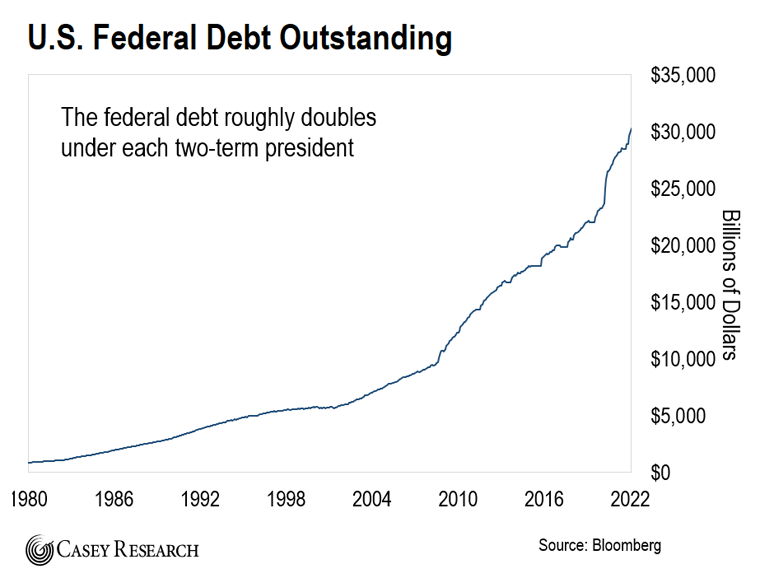 George H.W. Bush and Clinton together sent it up 111% over a combined 12 years.

Now with Biden holding the purse strings, the debt is already up another $1.9 trillion in just about a year.

At the end of the day, it doesn’t matter who is in power. Politicians like to spend money. It gives them the chance to say they’re doing something.

Even with all this spending, we haven’t seen runaway inflation like we did in the 1970s. Until now.

The problem with inflation is that it eats away at your hard-earned savings. Most years, we get some level of inflation. It’s usually around 2%. 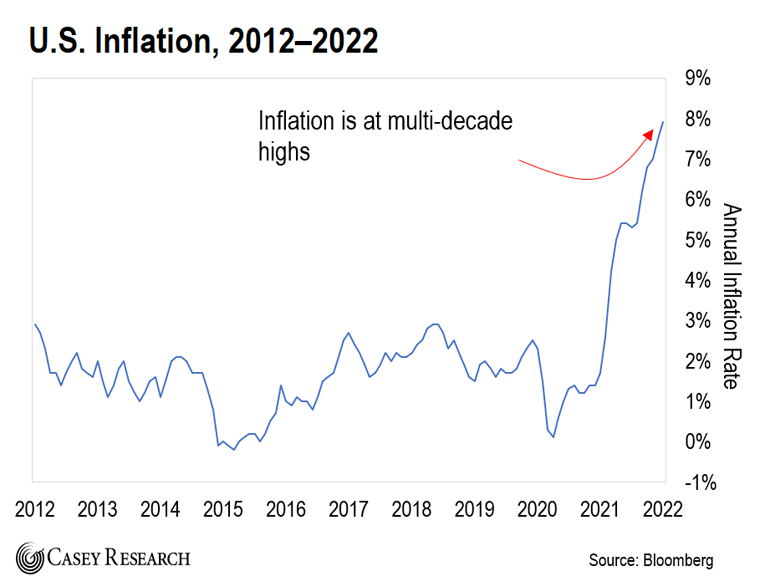 At that rate, most people can handle it. But if today’s rate of 7.9% sticks, you’ll lose over 25% of the value of what’s in your checkbook in four years.

That’s not a great feeling.

For a long time, U.S. Treasury bonds gave savers a way to keep up. They offered a reliable way to earn a decent yield on your idle cash.

That seems unthinkable in today’s world. With savings accounts from major banks paying 0.5% or less and long-term government bonds like the 10-year yielding around 2.4%, you’re lucky to find anything more than that.

And they still don’t fix the problem of keeping your wealth intact.

Even the one government bond designed to protect against inflation – the Series I Savings Bond – isn’t helping much. At a 7.12% rate, inflation is leaving it in the dust.

And the bad news is… elevated inflation will be here for a while.

Gas prices are the highest on record. Breakfast staples like eggs, bacon, and coffee are surging. Every trip you make to the store is more expensive than the last.

And we have decades of spending and bad policies to thank. It’s all coming full circle as spending runs out of control.

However, there’s hope. You just have to know where to look.

This Asset Is Hiding in Plain Sight

We’ve been preparing readers of our flagship Strategic Investor service for this very moment. And we’re doing it with assets you may not even realize are great ways to fight inflation.

In fact, they’re so good, they blow away the returns of the Series I Savings Bond… and just about any other long-term investment out there. 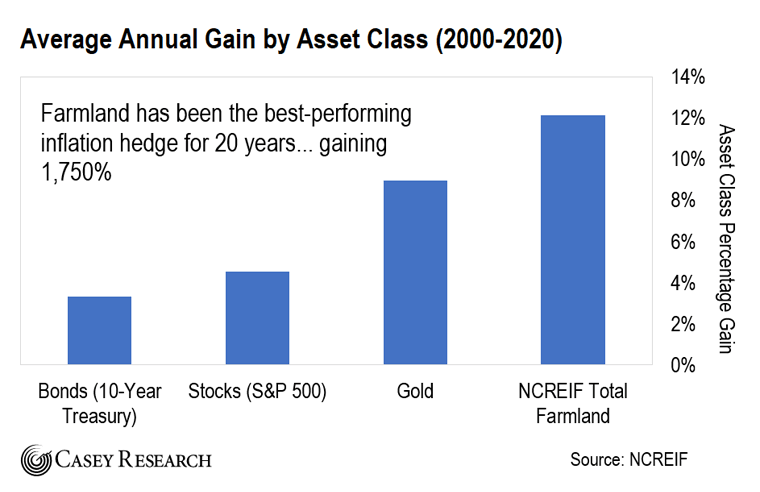 As you can see, it’s averaging a compound annual return of about 12%. That’s more than twice the rate of stocks over the same period. And it’s far more than the 7.9% rate of inflation.

Even if inflation ticks higher, I expect that farmland will continue to outperform. That’s because farmland has a long track-record of providing value.

In the past five decades, there were only five years where farmland decreased in value. And more importantly, the NCREIF Farmland Index hasn’t had a single down year for nearly 30 years.

It’s a great way to beat inflation. And readers of Strategic Investor know this firsthand, with open gains of 76% in 10 months on one of our plays and 37% in just one month on another.

Now, you may think you’ve missed the boat when it comes to inflation. You may even think you’re too late to the farmland game.

However, my colleague Dave Forest recently put together a presentation to show you why that’s not the case today.

There’s an old saying that you rely on a doctor once in your life, a priest once in your life, but a farmer three times a day. So while every trip to the store is taking a bite out of your pocketbook, there’s still time to bite back by betting on a farm.