We can see this in emerging market currencies. Just look at the South African rand. It’s down 10% against the dollar since the start of August. 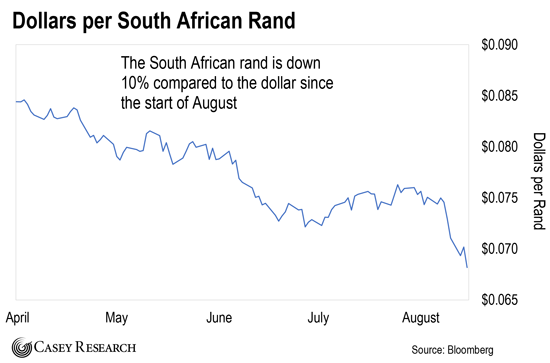 The Argentine peso is also getting slaughtered… It’s down 8% relative to the dollar this month. And the Russian ruble is down 7% over the past month.

Of course, emerging market currencies aren’t the only things falling. Stocks in the developing world are also taking it on the chin. 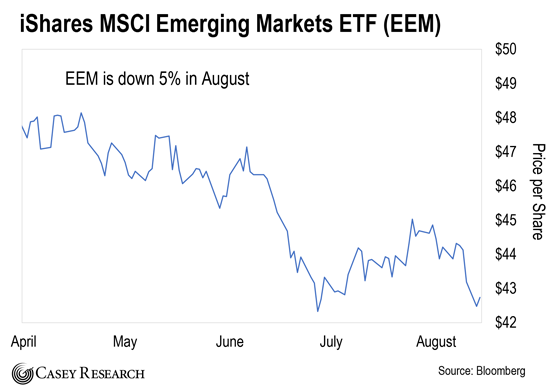 • Fear’s even engulfing the developed world…

Look no further than Italy. The Dow Jones Italy Index sank 6% in August: 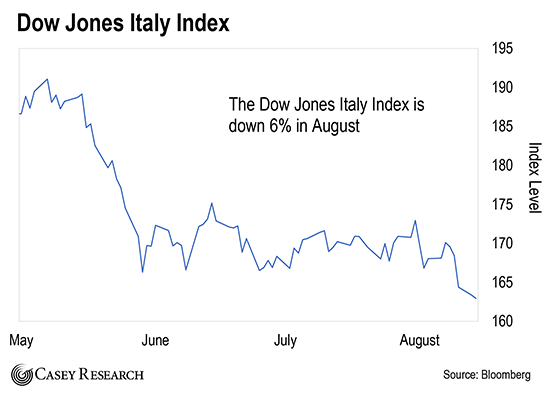 The same goes for Greek stocks. The Dow Jones Greece Index dropped 6% in the past two weeks: 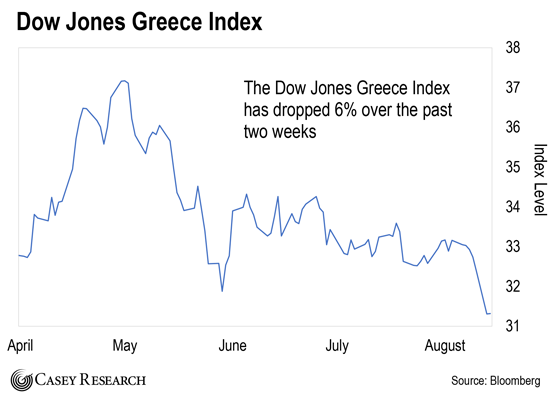 I could go on and on. My point is that these emerging markets, and other risky assets, are taking a beating.

Of course, this isn’t coincidental. They’re tanking because of what’s happening in Turkey.

If you’ve been reading the Dispatch, you know what I’m talking about. If not, I’ll bring you up to speed.

• There’s a crisis happening in Turkey…

Its currency is plunging. Its stock market is a train wreck. And its economy is drowning in debt.

Of course, these problems didn’t come out of nowhere. They’ve been brewing for years. But Turkey’s crisis kicked into high gear last week, thanks to Donald Trump.

This sent its currency, the lira, into a downward spiral. It fell 14% on Friday and another 7% on Monday. It’s now down 40% relative to the dollar on the year. Only the Venezuelan bolívar and Sudanese pound have fared worse in 2018.

You can see what I mean in the chart below. It shows the performance of the iShares MSCI Turkey ETF (TUR) over the past year. 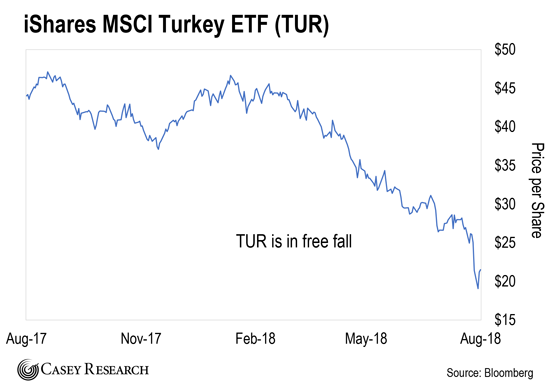 But the bloodshed didn’t end there. On Monday, TUR fell another 11%.

These are serious moves… But the real question is, “what happens next?”

• Many commentators fear Turkey will set off a “contagion”…

This is when turmoil spreads from one market to another, like an airborne virus. Check out some recent headlines:

Now, we’ve seen this happen to an extent already. But some analysts think Turkey could be the pin that sets off the next global financial crisis. Others see this recent shakeout as a buying opportunity.

In short, there are a lot of opinions floating around. That’s why I wrote this essay.

I want to help you make sense of what’s happening—and which stocks to hold amidst all of this turmoil (more on that in a second).

But first, you need to understand something…

• Turkey’s economy is floating on a sea of debt…

That’s a problem. You see, Turkey isn’t some tiny economy like Greece or Cyprus. It has a nearly $1 trillion economy—the 17th largest in the world.

Because of this, many people think Turkey could drag down other countries… and possibly set off a chain reaction.

• Of course, Turkey isn’t the only country looking down the barrel of this gun…

Hungary, Argentina, Poland and Chile all have foreign-currency denominated debt that stands at more than half of gross domestic product, according to Deutsche Bank.

All told, the Institute of International Finance estimates that governments, financial institutions, and companies in emerging markets are sitting on around $2.7 trillion in dollar-denominated debt, set to come due between now and the end of 2025.

In other words, the world is awash in dollar-denominated debt.

That’s a problem. You see, foreign debt becomes difficult (more expensive) to pay back when the local currency loses its value. And the U.S. dollar is soaring.

In fact, the U.S. Dollar Index is up 7% since March and is now at its highest level in over a year.

• The U.S. dollar should keep strengthening, too…

After all, it’s just broken out to a one-year high against the euro (the biggest counterweight to the dollar).

This means that the dollar should keep appreciating, and not just against the euro. If I’m right about that, emerging markets could experience a lot of pain.

Eventually, that will set up a huge buying opportunity. We’re just not quite there yet.

The good news is that you can still make money in the meantime.

One way to do this, as I explained on Monday, is to bet on the U.S. dollar. You can do this by buying the Invesco DB US Dollar Index Bullish Fund (UUP).

This fund rises when the dollar does the same. That makes it an easy way to profit from a strengthening dollar.

• I also encourage you to hold on to your U.S. stocks…

I recommend this for a couple of reasons.

Number one, U.S. stocks have taken all the recent negative news in stride. In fact, the S&P 500 is up slightly since the beginning of last week. That’s a sign of strength.

More importantly, U.S. stocks are still in a strong uptrend. And despite what many people say, this is a healthy rally. In fact, about 60% of the stocks in the Russell 3000 Index are positive on the year. That demonstrates broad participation.

In closing, you shouldn’t panic about Turkey. But now is as good a time as ever to exercise caution. And here’s what you can do to protect yourself while still having “skin in the game.”

This will help you sleep well at night if you’re nervous about what’s happening in Turkey.

Today, a reader weighs in on the recent news regarding conspiracy theorist Alex Jones…

It was recently brought to my attention that Alex Jones was banned from several social media platforms including YouTube, Facebook, and so forth. All within 12 hours. Now I’m not saying I agree with him because I DO NOT. But I feel that people are being silenced by large corporations. And I feel that goes against what America was founded on. And at what point do our “leaders” not allow us to see and choose what media or news outlets we view? I would love to hear back about what you guys think, I am open to both sides of the argument and am open to discussion.

Justin’s reply: Thanks for writing in, Jacob. We’ll be featuring this topic in a future Conversations With Casey. Keep your eyes peeled. And as always, if you have any questions or suggestions for the Dispatch, send them to us right here.