Which is more important?

Is it the fundamentals of a stock…

Or is it the technical aspects, like the price chart?

Most investors have a preference… some even mock the other.

Fundamental folks laugh at the “squiggly lines” on charts. The technical folks give a big yawn at the mere mention of a balance sheet.

But we think you need both.

So today, the former invites the latter into these pages. We’ll look at what the future holds for the oil price… and how you can profit…

If you’re new to the Dispatch, welcome. If you’re a regular reader, welcome back.

We do this by showcasing ideas from our in-house investing experts, such as Dave Forest, Nick Giambruno, and the founder of our business, Doug Casey.

But from time to time, we switch from looking at the fundamentals of an idea, and instead look at the charts. We ask if there’s anything in the price action that can either confirm or contradict our expert’s take on a fundamental idea.

When we do that, we turn to technical analyst, Imre Gams.

“One of the Craziest Things I’ve Ever Seen”

But before we look ahead, let’s recap some of the recent oil story.

According to Imre, $42.50 was supposed to be a major key level in crude oil. For instance, after falling to this level back in 2017, the price bounced back 80% higher.

So as Imre tells it, “When prices cracked this barrier in March 2020, I knew that a lot of traders could smell the blood in the water.”

By that he means that when a price drops below a key support level, it can result in a rapid move lower. That happens for two reasons.

The first is, traders who were willing to buy around the support level, stop buying – they’re waiting for the price to reach another support level. That’s usually much lower.

That’s what happened last year when the oil price collapsed.

But what happened next surprised even someone of Imre’s experience in the market. As he explained on a call yesterday:

With a global pandemic still raging, I was very confident that we could reach a downside target of $26. That was a multiyear low going all the way back to 2016.

But what happened just a few weeks later, on Monday, April 20, was one of the craziest things I’ve ever seen in my career.

The price of a barrel of oil somehow went negative. The absolute low was minus-$40.32. This meant that if you held barrels of oil in storage, you had to pay somebody to take them off your hands.

According to Institutional Investor, “In all, 14,913 crude oil contracts exchanged hands at negative prices on April 20.”

To put that in some kind of perspective: Each futures contract covers 1,000 barrels. So you’re talking the equivalent of 14.9 million barrels trading for a negative price. That’s equal to around 16% of daily oil demand!

But the oil price didn’t stay that low. A year later and a barrel of crude is currently trading at $70.91.

As Imre went on to say:

Oil markets can be notoriously volatile, but I’ve never seen anything like the price action we’ve had over the last 14 months. The rally since last year’s extreme low has so far exceeded 275%.

A Clear Case for Higher Oil

It’s good to get Imre’s perspective as a trader… someone who’s actively buying and selling every hour of every day. That’s different from an investor, who may only transact once or twice a week.

So now the question is: What’s next for oil prices?

This week we’ve given you the fundamental view – inflation, red tape and activist pressure on supply, and ongoing demand. But what do the charts say?

We put that question to Imre:

My view is that we are firmly in the middle of a bull market with more room to run. As you can see from this chart, I’ve outlined a key level. That’s at $77.55. This level has provided support to the price back in 2012 and also as major resistance in 2018. 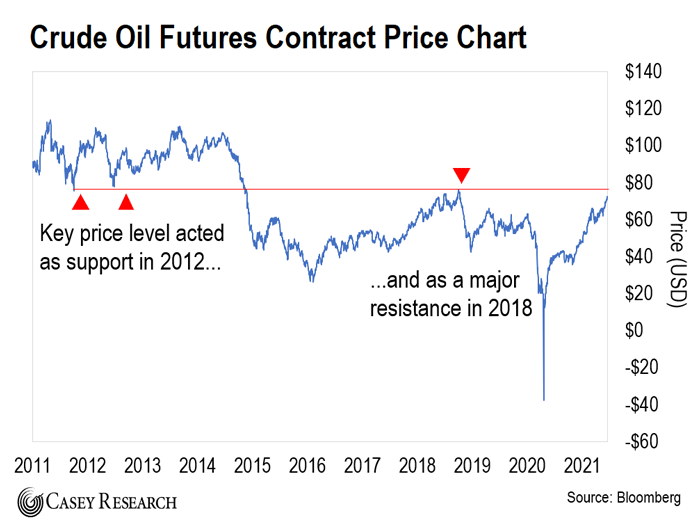 You can see that point labelled clearly on the chart. On the left of the chart, the price bounces off the $77.55 level, creating a “support” for the oil price.

After the oil price eventually plunged through that support, that same price has acted as “resistance” in 2018. You can see that since falling below that level, it hasn’t been able to trade above it.

This is why checking out the price action on a chart can be so important and useful. Imre explains:

When you have such an important level, it tends to act as a magnet for prices. Because of that, we should see a re-test of $77.55 in the coming weeks. This level will likely hold in the short-term and will result in a small corrective sell-off in oil prices.

Because this bull market is not yet over, the following rally should have enough momentum to take out $77.55.

As you should know, no market ever goes in a straight line. So investors should pay close attention to the key level.

Thinking about how this applies to Dave Forest’s fundamental analysis on the oil story, this is good supporting evidence for a higher price. What’s more, if the price gets enough momentum to push through that resistance, you could see a rapid price rise.

Look at the same chart again. Look how quickly the price fell in 2014 after breaking through the support level. 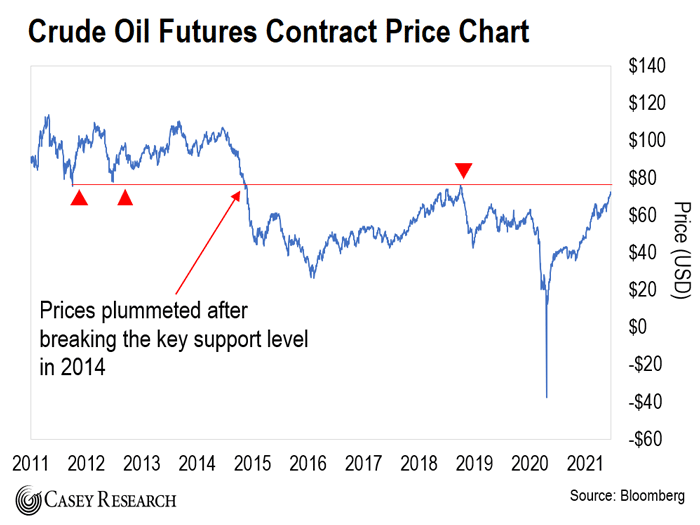 Today, the oil price is pointed higher. And that’s bullish for the broader energy sector.

We already liked Dave’s take on the fundamentals for the oil sector. And now we have the technical analysis to confirm that view.

To us, that makes an excellent case to follow Dave’s advice on this story, including how to play this and other markets for profit. To find out how to do so, go here.