Japan’s Government Pension Investment Fund made a record cut to the weighting of [U.S.] Treasuries in its portfolio last fiscal year as the world’s safest asset led a global debt selloff.

We laugh at the idea that people still refer to U.S. Treasuries as the “world’s safest asset.”

If by “safest” they mean an asset that has depreciated by 77% over the past 44 years, then sure.

It makes no sense.

In today’s Dispatch, we’ll show you how the government and Federal Reserve have devalued your money, and why investors are right to look for safety elsewhere.

The Fed Has Failed

You may have figured it out already… This is another story about inflation.

We don’t apologize for continuing to beat the drum on this.

If there’s one thing – just one thing – that the U.S. Federal Reserve has failed to do, it’s to meet its stated goals.

It has failed to do so with one goal more than any other. That is, to “promote effectively the goals of… stable prices.”

Now, we should make it clear that Congress only gave the Fed this goal in November 1977. Perhaps Congress figured it needed to do something after the value of the U.S. dollar had collapsed so much in the previous 30 years. 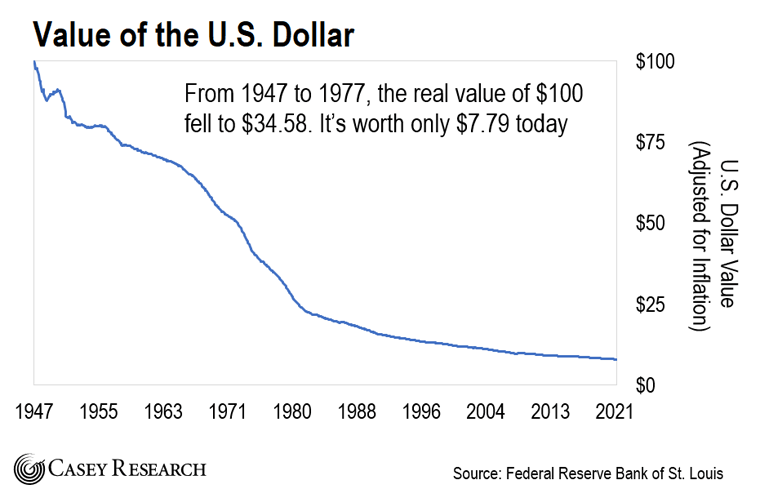 Clearly, the government and Congress felt they had to do something about it.

The end of the Bretton Woods agreement in 1971, the crippling cost of wars in Vietnam and policing the world, and the 1970s oil crisis, had all driven down the value of the dollar.

And so, for some reason – despite the Fed’s track record of devaluing the dollar by 65% in 30 years – Congress thought the Fed was up to the job.

So how did that play out?

The chart above shows in full detail. Rather than achieving a goal of “stable prices,” the Fed failed.

Don’t Get This Wrong

The Fed’s inability to maintain stable prices (in other words, protect the purchasing power of the dollar), means that it’s no surprise investment funds are ditching the dollar.

Now to be fair, Japan’s Government Pension Investment Fund is just reverting its U.S. debt exposure back to where it was in 2014.

But regardless of the reasons and the timing… and regardless of how much U.S. debt Japan’s biggest pension fund owns… It’s clear that even big investors are worried about inflation and how it devalues assets like bonds.

So where is Japan’s pension fund putting its money? Again, according to the Bloomberg report, it’s reallocating those funds into “higher returning equities” and “overseas debt.”

The overseas debt is mainly European debt – maybe the pension fund hasn’t learned its lesson… or maybe it’s a case of the lesser of two evils.

What we do know is that regular investors should take note. While we believe that it makes sense to hold some cash, there is a real danger of holding too much cash.

That’s especially true if the returns on non-cash investments (e.g. stocks, bonds, gold, etc.) aren’t high enough to make up for the devaluation of their cash.

Remember, over the past year, while interest rates have been close to zero, the inflation rate was over 5%. That means, in effect, the value of each $100 you had in cash at the start of 2020 is now only worth $95.

Therefore, if as an investor you have a significant cash holding as part of your portfolio, you need to make sure the rest of your investments are in higher-return assets.

It’s something that most investors likely don’t consider.

Rather than looking at their total return across all assets, they may just look at the return of their stock portfolio… and assume they’re doing just fine.

That’s why we’re devoting this week to asset allocation 101. It’s crucial if you want to build a portfolio that works for you as a whole… not just part of it.

Getting this right or wrong can have a major impact on your portfolio and your wealth. Stick around as we look at this in more detail in the days ahead.