Justin’s note: As longtime readers know, we recommend owning physical gold for the long term… and gold stocks for their huge upside potential.

And while gold’s been stuck in a bear market this year, you should still be preparing for the next boom. Today, Palm Beach Daily analyst Nick Rokke explains why—and shares three ways to position yourself when the trends change course.

I attended the symposium in Vancouver last month. It’s the world’s premier natural resource conference. There were well over 100 speakers and companies presenting, and hundreds more were in attendance.

But the mood was gloomy. Most commodities topped out in 2011… They’ve been down since. 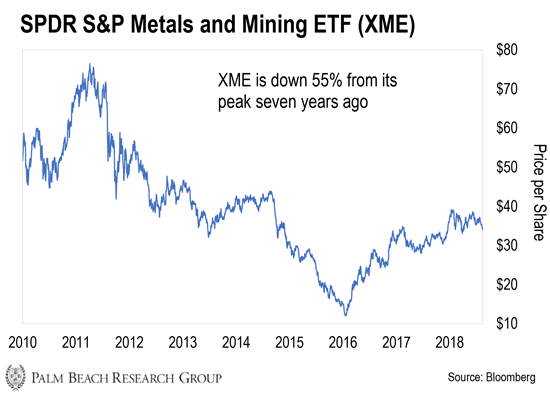 The chart above shows the SPDR S&P Metals and Mining ETF (XME), which holds a basket of mining companies.

As a whole, miners have lost 55% of their money over the last seven years. It’s no wonder these guys are feeling down in the dumps.

At the Palm Beach Research Group, we still like gold, though. It’s the original chaos hedge… and one of our favorite ways to preserve wealth.

Gold acts as a form of insurance against things that could go wrong. That’s why we recommend that you allocate a small amount of gold (about 5%) to your portfolio.

Despite the downturn in metals, I still see upside in gold. Today, I’ll tell you why… and share the three best ways to add gold exposure to your portfolio. 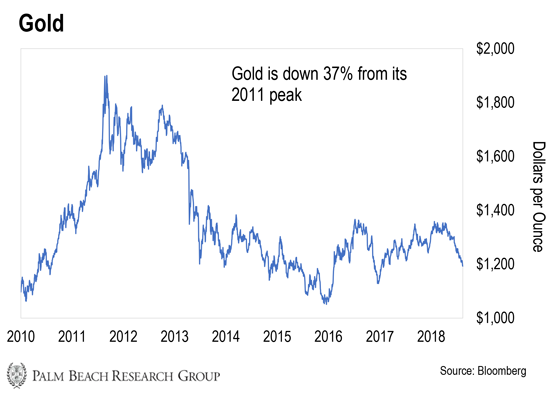 Big swings are normal in the commodities markets… So are long drawdowns like we’re seeing now. Commodities are known for their booms and busts—and always will be.

But as the chart shows, gold appears to be carving out a bottom. This process can take years, though. That can be very frustrating for mining companies and their investors.

It takes patience to make money in these markets. But while we wait for a turnaround, there are three niches within the mining space that will benefit from the next boom—whenever it comes.

That’s why you want to be positioned early…

Three Ways to Prepare for the Next Gold Boom

These are companies that finance mining projects, and in return, receive royalties from all the gold, silver, or whatever else they produce.

Franco-Nevada is the largest royalty company in the space, and it has weathered the bear market well. In fact, it’s up 77% since September 2011.

They don’t have to rely on finding major discoveries like mining companies do. They make money by selling the supplies necessary to hit these jackpots.

A major company in this space is Caterpillar, likely the world’s largest supplier of mining equipment. It is far from a pure play on the mining sector, though. Caterpillar also makes construction, oil drilling, and transportation equipment.

Ritchie Bros. Auctioneers is another picks-and-shovels play… The company auctions mining equipment. If this downtrend continues, more companies will need to quickly sell equipment to survive.

Look for management teams led by people who have been through a few of these boom-and-bust cycles… They know what it takes to survive the downturn.

It’s also nice to know if the people leading the company have become wealthy from the mining space.

During the “Legends of the Mining Industry” panel at the Sprott conference, mining tycoon Ross Beaty said he’s willing to put another $500 million into his companies—if needed.

Beaty should know a thing or two about mining. He’s spent almost 40 years in the industry. Since 1985, he’s founded and sold several resource companies. Today, he runs Pan American Silver and Equinox Gold.

Beaty is buying projects now to start mining when the tides turn. He plans on making a fortune doing this… You should ride his coattails.

Bringing It All Together

Those are the three spots I’m looking to start a position in. If there’s a further pullback in gold, I’ll add a little more to my positions.

Like I said, the turnaround in commodities could happen soon… or it might not happen for a while. But I want you to be positioned for when it does… because these types of companies have the ability to multiply your money.

Now, some of these companies are small—and can be volatile. As always, do your homework and research each company. And never risk more than you can afford to lose.

Justin’s note: I recommend signing up for Dave Forest’s International Speculator newsletter for the highest potential gold stocks today. His portfolio is filled with the top names in the space… And they’re primed to rip higher when the gold market rebounds.

You can learn more about his letter—and one of his top money-making ideas right now—by clicking here.

Today, more readers write in about our recent Conversations With Casey, where Doug shared his thoughts on the U.S. justice system…

Got to agree with Doug, to the average person the legal system seems arbitrary and something to be avoided. Clearly it is corrupt and political, lacking any semblance of justice. The fact that Hillary and Bill are still walking around loose is all the proof I need of this.