We’re in the middle of one of the most contentious elections in U.S. history.

And as uncertainty ramped up leading into Election Day, we saw a familiar story play out with the gold price…

It kept falling for a week after. And then for another month.

In other words, after the 2016 election, gold traded sideways for a bit… before a long-term bull took over, nearly doubling the yellow metal’s price.

As of writing, it’s since recovered, trading over 2% above that level.

Like in 2016, the initial setbacks we saw in the gold price around the election this year have so far proven to be temporary. That doesn’t mean we won’t see more dips along the way.

But I believe that gold is poised to keep climbing even higher. I wouldn’t be surprised if it pushes past $2,200 an ounce.

That’s because right now, there’s three powerful factors giving the gold price a boost – and they have nothing to do with who’s president…

The Worst Deficit Situation in Over Five Decades

And the U.S. is spending a lot to deal with this crisis – about $4 trillion, as of October 2020. And that number’s expected to grow.

The U.S. budget deficit is in terrible shape as a result. And that’s the first trend giving gold a boost. 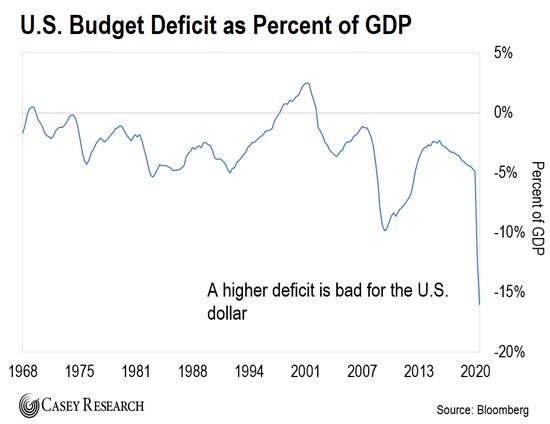 Despite this, the Fed has committed to more unlimited money printing.

With trillions more dollars in circulation… the U.S. dollar will continue to lose value against other currencies.

That will only make gold more attractive, as more and more people turn to it as a safe-haven store of value when the dollar fails to do so.

A Tax on Your Savings

Another major trend that will drive gold higher is the declining real interest rates – the interest rate adjusted for inflation.

And during the COVID crisis, economies have been using them as the “stimulus of last resort.”

Central banks – such as the Bank of Canada or the European Central Bank – have been lowering real interest rates to encourage people to borrow and spend, to help stimulate the economy.

But when interest rates are already low, as they are now, the only way to lower them further is to go below zero.

And in the U.S., real interest rates are already negative.

This means you’re essentially paying a debtor to borrow your money.

So bonds, for example, don’t produce any income for their investors. Just the opposite – their negative yield means that an investor who buys those bonds today will get less money than what they invested when the bond matures.

In this case, gold is attractive. It doesn’t pay interest. But at least you’re not guaranteed to lose money.

As those looking for a safe-haven investment turn to gold in favor of bonds, that’ll be good for the gold price.

And gold tends to move opposite real interest rates.

In other words, as real interest rates drop, the price of gold rises.

Take a look at the chart below. You can see that in 2012, gold had one of its best years ever, soaring past $1,790 an ounce as real interest rates plummeted (marked by the red arrows). 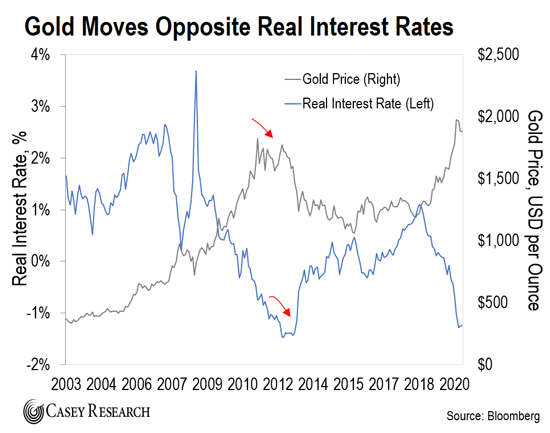 Real interest rates are currently about as low as they were in 2012… and likely headed lower. The U.S. economy is in a state of crisis. It won’t be able to support high interest rates.

If history is any indication, we could soon see the gold price hit $2,200 or more as real interest rates drop further.

Growing Concern Over a COVID Vaccine

Finally, there’s still no COVID vaccine. And this factor will continue wreaking havoc on the U.S. economy… regardless of who’s president.

Two companies, Moderna and Pfizer, are close to having interim data on their vaccine trials. Moderna is expected to have some data later this month, while Pfizer is somewhat behind, Bloomberg reports.

The longer we wait for a vaccine, the longer the pandemic will continue causing lockdowns… creating business disruptions… worsening unemployment… and driving the need for more stimulus.

And all of this volatility and economic uncertainty are good for gold.

We may see more temporary slips in gold’s price in the days and weeks ahead. But I believe its long-term bull market is still intact.

And as the pandemic continues hammering the U.S. economy… a weakening dollar and low real interest rates will boost gold’s price even higher.

To take advantage, consider owning physical gold. For a more practical option, I recommend the SPDR Gold Trust (GLD). It’ll give you direct, cost-effective exposure to the yellow metal. Just make sure to position size appropriately.

And for the first time, he sat down to reveal all the details behind his method… and exactly how you could use it to 10x… 20x… even 50x your money.