Justin’s note: Technology expert and Silicon Valley insider Jeff Brown is one of our friends over at Bonner & Partners. He hears about the biggest tech trends – before they hit the mainstream media – and shares them with subscribers of his Near Future Report newsletter. He’s also known for pinpointing the No. 1 performing stock in the S&P 500 in 2016… and again in 2018. Not many people can say they recommended the biggest winner in two separate calendar years.

In short, when Jeff is excited about a big story, I don’t ignore it. I pass it along as soon as I can.

Today, Jeff shows us why self-driving cars are here to stay… and the piece of technology that will ultimately bring them to the masses. And as you’ll see, it’s not just for self-driving cars… this technology will soon become a crucial part of our everyday lives. Read on to learn why…

Last October, a modified Toyota Prius drove itself 3,099 miles – from the Golden Gate Bridge in San Francisco to the George Washington Bridge in Manhattan.

There was a human in the driver’s seat, but he didn’t touch the steering wheel, gas, or brake pedals for the entire trip. The self-driving car drove itself the entire distance.

If any readers are curious about the trip, have a look at the time-lapse video of the entire coast-to-coast journey here.

This coast-to-coast, self-driving journey was the first of its kind. Yet it got little to no press.

But make no mistake, this is a remarkable achievement. This sort of trip wouldn’t have been possible even just a few years ago.

Today, I want to share with you the technology that made it possible, and show why it’s a trend that ought to be on every investor’s radar…

I remember when I first sat in a self-driving car. It was October 2011, on NASA’s Ames Research campus in Mountain View, California. The car was one of Google’s earliest versions of its self-driving technology.

But only seven years later, the technology has progressed immensely.

The Prius I mentioned above that drove over 3,000 miles without human intervention was outfitted with only seven cameras. Six were positioned outside the car in order to provide a 360-degree view, and one was inside facing the driver.

Equally impressive was that the trip was made with only basic digital maps to work from. This is compared to the high-definition maps often used in self-driving vehicles, which are precise down to a few centimeters.

What was the technology that enabled the self-driving Prius to make its cross-country trip? After all, it looked just like any other car.

The answer is simple… Hidden in plain sight in the back of the car was a black box. It looked something like this. 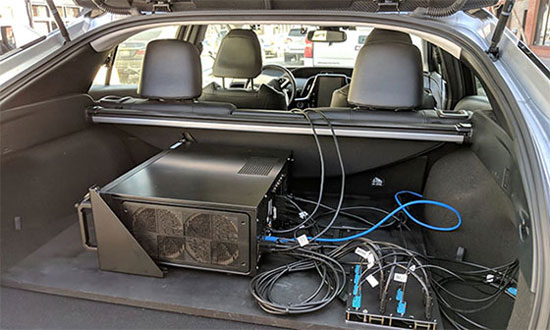 The Secret Hiding in the Trunk

This black box is the key. The black box makes use of a special type of software that is an essential part of self-driving cars. I’m talking about artificial intelligence, or AI.

Contained within that black box was an advanced system powerful enough to take in the data from the Prius’ cameras, use AI to analyze the data, and drive the car and the passenger coast-to-coast safely.

At this point, you may be wondering what AI has to do with self-driving cars.

You see, the way autonomous cars will become dependable enough to function on public roads is through the use of AI.

As these cars drive, they produce a massive amount of data. Just one autonomous vehicle is estimated to produce roughly 4,000 gigabytes of information a day. For perspective, the average high-definition (HD) movie has only 4 gigabytes of data.

This data is then analyzed with AI and used to improve the car’s driving performance.

That’s what allowed the Prius to drive cross-country. The car “learned” how to drive safely by analyzing millions of miles of data. That’s why I say AI is the key to the success of self-driving cars. They simply can’t operate without it.

Artificial intelligence is what will ultimately bring self-driving cars to the masses.

And it’s not just self-driving cars. AI is becoming increasingly essential to our modern lives. In fact, you’ve likely used AI without even knowing it.

Have you ever purchased something by communicating with an Amazon Echo (Alexa)?

Have you ever asked Apple’s Siri to look up a fact from the internet?

Or maybe you’ve simply searched for something on Google.

If you’ve done any of these things, you’ve already used AI. All of these devices and services make use of artificial intelligence.

And AI is becoming a necessity in modern business. Companies like Bloomberg, Walmart, and even Johnson & Johnson are using AI on a daily basis.

According to a November 2018 survey from McKinsey & Company, 47% of surveyed businesses said they had begun implementing artificial intelligence into their business. In 2017, that figure was only 20%.

And according to a recent study by MIT’s Sloan Management Review, 85% of companies think AI will offer a competitive advantage.

There will come a time soon that AI won’t just be advantageous to companies, it’ll be a necessity. In the next few years, a company that fails to adapt artificial intelligence into its business model would be akin to a company that doesn’t use the internet today. It will become obsolete.

You get an idea of just how essential AI is becoming to corporations by looking at the amount of money companies are willing to pay to acquire AI startups.

Increased investments into the AI and machine learning (ML) industry over the last few years has been staggering. Just have a look at the AI/ML acquisition value since 2015. 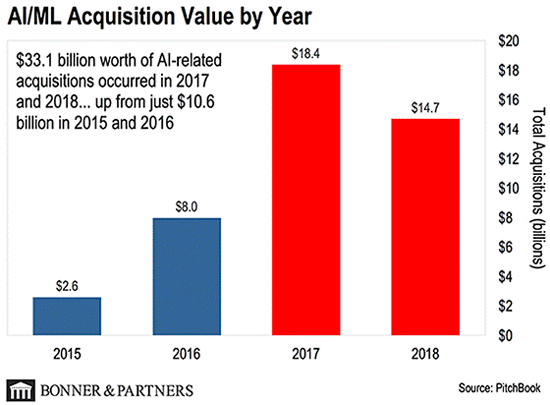 Admittedly, 2017 was a bit of an outlier year due to Intel’s $15.3 billion acquisition of Mobileye.

More telling to me, however, is what happened next.

2018 saw $14.7 billion in acquisitions without any outliers like Mobileye. It represented 84% growth compared to 2016.

However, when I look at these numbers, the actual number of acquisitions is an even stronger indicator than the dollar value… 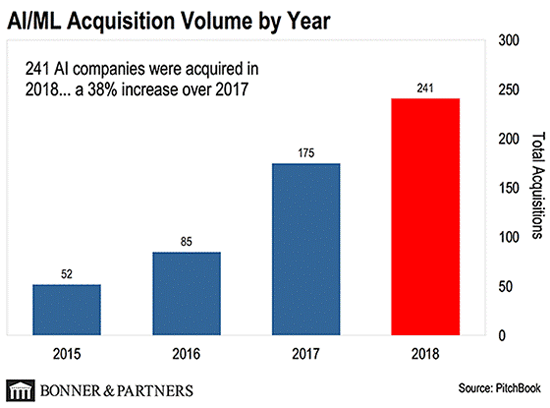 I say that this is a stronger indication of activity because this is a relatively new industry. There just aren’t that many large, $15 billion AI companies around to acquire. Most of the activity is in smaller, early-stage companies that haven’t reached anywhere near $1 billion-plus valuations.

That means that incumbent technology companies that want access to artificial intelligence technology and teams of engineers must go out and acquire these smaller companies.

We have reached an inflection point with this technology. We are on the cusp of explosive growth. Few realize it, but in a matter of a few years, artificial intelligence will be as commonplace as the internet. We’ll look back and wonder how we got along without it.

AI won’t just improve upon today’s technology. It will reinvent it.

P.S. There’s one more part of this story I wasn’t able to include above. Artificial intelligence will change our society just like the internet did two decades ago. Smart investors will make a fortune. But before AI and self-driving cars go mainstream, one more piece of tech needs to be completed. It’s not an exaggeration to say that the future of America’s economic dominance depends on this. Get the full story, and learn why this tech will be the biggest investment story of 2019, by watching this special presentation I just released.

She is a naïve, radical utopian, socialist DOPE. It’s all about her looks. To me, she reminds me of a fast talking, slithering lizard. A pox on her and her ilk.

An interesting read as always. To be intellectually honest, much of what is said here concerning stupidity, the making of illusory promises, and failure to comprehend the results of actions also very much applies to Trump.

Articles like this, Fox, GOP bashing are making her popular. To me it’s another woman to bash out there. Get off it, really…

How disappointing to see you write of AOC as “stupid” when you disagree with her. Bill Bonner wrote a similarly scathing article, putting her down for having been a waitress 18 months ago, and for wanting healthcare for all, free tuition, etc. It just goes to show, we all see through our own prisms. What I see is a motivated and idealistic young college graduate who works for a living, who does not deserve (that is, she has not yet really earned it!) the vitriol aimed at her. She is new to government – but so is our President. She has learning to do – and because she is new at this, some of those lessons are still in the future. At 29, did you know everything – or think you did? Because what I see is hope and enthusiasm for making lives better. She may be smarter than you think, to put out what you see as extreme ideas, when most experienced negotiations begin this way – knowing the pendulum will swing wildly both ways before settling somewhere in the middle.

It’s precisely because she is so new at this that the criticism seems more that she is simply a new punching bag now that Hillary’s name has been worn out. Honestly, get a grip! While you may not agree with socialism – it’s not evil as fascism… now there is something to fear – recognize who is promoting THAT in our country. It isn’t AOC.

One of your better papers. They are all good, this one was exceptional. You have expressed my thoughts far better than I. A few things:

While 2 points doesn’t seem like a “helluva” lot, when you look at the curve and look at the PERCENTAGE of folks now with below average IQ, it is alarming.

Your analysis of AOC’s IQ and the fact that you call her stupid is reflection of your own inadequacies. Who are you to judge others without factual knowledge? This is why America is in trouble, we operate out of ignorance and bigotry.

Really! We tax so much less than we did 50 years ago on the country’s wealthiest people. So why not do that again; we had less equality among workers, even the lowest paid worker could live a decent life on his/her salary, and had a more comfortable lifestyle for the majority of Americans. Wasn’t the U.S. a democracy then, even as it struggled with civil rights?

Having lived twice in Europe, their equality among people appears greater for health care, for child care, for benefits for their own prison reform, for their education, which is free even for higher education. Would you label them all a dirty word of “socialist?”

We must do better for our own people; taxes are the price for civilization, for equality, for infrastructure, for health care, for child care, for a living wage for everyone, for housing and on and on.

WHY are you against that?