That’s not something you hear every day. But Moon Juice, a hip California juice bar chain, has been asking its customers this question lately.

It’s not the only place doing this, either. According to the marijuana media website Leafly, juice bars across southern California are now offering marijuana infusions.

Many people are saying “yes” … but not to get stoned.

No. They’re doing this for health reasons.

I’ll tell you why in a second. I’ll also explain why marijuana will be the next big health craze. And finally, I’ll show you how to profit from it.

Let me clarify something first.

CBD is a compound in cannabis. It doesn’t get people high like THC… But it does offer many health benefits.

People take it to treat everything from anxiety to insomnia to chronic pain – you name it.

And because CBD doesn’t get people stoned, you can buy it almost anywhere in the United States. That’s actually been true for years. But CBD didn’t become such a big health craze until recently.

So what’s changed? Simple: Marijuana legalization is sweeping the nation.

• In short, marijuana has never been easier to buy…

Because of this, marijuana is no longer just for stoners. Lawyers, doctors, and accountants are consuming it, too. It’s gone mainstream.

And this trend will only continue. That’s because the marijuana industry is growing quickly.

Of course, it wasn’t always like this. A few years ago, the marijuana industry only appealed to stoners. Dispensaries in places like Colorado mostly sold strains of marijuana. You had to be an aficionado to know what you were buying.

It’s a different story now. These days, many top marijuana brands don’t even emphasize what kind of marijuana they’re selling. Instead, they sell “feelings.”

Take 1906, a premier marijuana chocolate brand based in Denver, Colorado. It produces a “Go” chocolate for body energy. It has a “Pause” chocolate to help people relax. And it has a “Midnight” chocolate that helps people sleep.

Here’s a picture of the company’s chocolate factory that I toured last year. 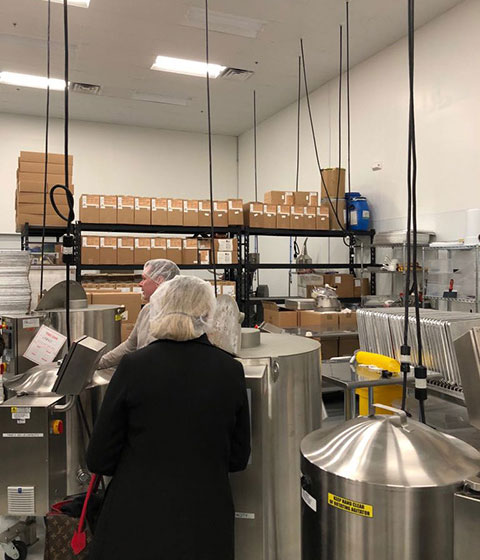 The company took this approach because it understands that many people are buying marijuana for the first time. They don’t know specific strains. But they do know what they want to feel.

You should also know something else: All of 1906’s products contain five milligrams (mg) of CBD and five mg of THC (a relatively low dose). 1906 did this because most people don’t want to get stoned out of their minds… They just want a mild high.

Some people don’t even want to get high at all…

They just want to experience the health benefits that cannabis offers. That’s why people are paying top dollar for CBD-infused juices. And that’s just one example. There are many other CBD products out on the market right now.

I know this because I attended a marijuana lifestyle conference last summer in Vancouver, Canada. There, I saw everything from CBD “bath bombs” to CBD dog treats… And this was before Canada legalized cannabis outright. See for yourself. 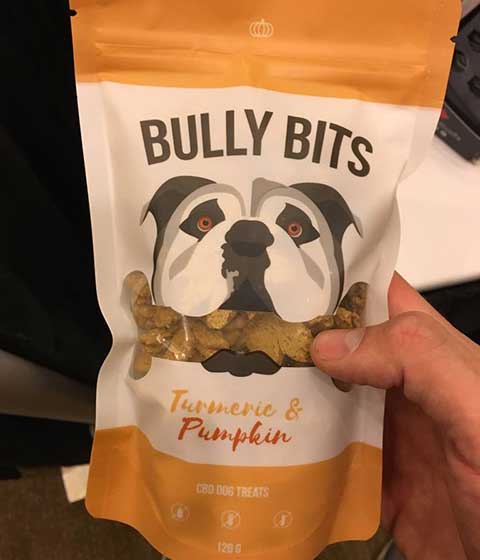 This company made this product because CBD is a powerful anti-inflammatory agent. It can help dogs with arthritis feel better. One of my good friends in Florida is using it for this reason. He says it’s done wonders for his dog.

They think that it’s something that only gets people high. But a lot of people aren’t buying marijuana to get stoned. They’re buying it for health reasons.

This trend will only continue as more states legalize marijuana. I’ll even go out on a limb and say this…

CBD will be the next big health craze in the United States.

•  The legal marijuana market is exploding before our eyes…

That means the industry is set to grow more than 20-fold in less than a decade. That’s almost unheard of. In fact, we haven’t seen a consumer industry grow this rapidly since broadband internet in the early 2000s.

So consider speculating on marijuana stocks, specifically those in the CBD industry if you haven’t already. Just remember to use discipline if you get into this space.

Only bet money you can afford to lose. Use stop losses. And take profits when they come.

Investors who use discipline with marijuana stocks will set themselves up for huge gains without exposing themselves to major losses.

P.S. Crisis Investing chief analyst Nick Giambruno has been hard at work researching the opportunity in the CBD industry… and he says one CBD oil stock is uniquely positioned to ride the crest of this wealth wave. This is the most lucrative opportunity he’s seen in a long time. And he just released a new video presentation with more details. You can check it out right here.

Just wanted to say I really enjoyed reading Mr. Tucker’s thoughts on architecture and while I primarily look at Casey Research for investment ideas, it is also reassuring to know his contributors are men with an interest in culture and the arts. Keep it up please.

Dear Mr. Tucker: I am very happy to hear that you appreciate great architecture. Are you influenced by Frank Lloyd Wright? I agree with you that one has to feel comfortable living in the house. The house at Fallingwater is beautiful as a piece of art. Do you know how many years people lived in that house? My guess is not too many years. For Chinese, the Fallingwater house is bad Feng shui. If you have time, please read some good Feng shui books.

As long as you’re aware that Frank Lloyd Wright’s houses were, for the most part, unlivable without a great deal of modification. He was quoted as saying that his houses were built to look at, not to live in.

E.B., I read your article on Frank Lloyd Wright with interest. I agree that when you encounter a building designed by a master architect it is immediately apparent. For several years I lived in Boca Raton and had the opportunity to be in several buildings designed by Addison Mizner. When you walk into one of his spaces it’s as if a weight drops from your shoulders. Your chest expands a little and you say: “Oh, my. This has to be a Mizner building.” His work is very different from Wright, but still amazing, and seems firmly rooted in the Florida landscape.

By the way, the tour of historic homes in Savannah is worth doing if you haven’t. The houses are all very different, but most were built during the pre-Civil War era, when the price of cotton was set in the warehouses along the river there. Folks had enough money to build their dreams and a few of them did. Savannah is a beautiful city in the spring. First planned city in the New World. In a specific way it reminds me of Paris in that the parts of both cities that everyone loves are built on a human scale that is open and graceful.