Rachel’s note: We may be at the beginning of a stock market “winter.”

The combination of inflation and higher interest rates is slowing down the economy. Consumers and businesses can now afford less than a year ago.

That means it’s fair to say we can expect lower profits.

But it also means that now is a great time to employ one of Wall Street’s favorite strategies. It’s behind some of their biggest profits, and the best part is… you can use it, too.

There’s a simple strategy Wall Street doesn’t want you to know about. And yet, it’s behind some of their biggest profits.

And I can tell you from personal experience, it’s a game-changer in choppy markets.

If you don’t know my story, I got my first job on Wall Street at 19 years old. And over the next 15 years, I helped clients through a lot of market turmoil.

For example, I was a Senior Managing Director at Bear Stearns in London when the Asian crisis hit in 1997. Then the Long-Term Capital Management crisis hit a year later.

I led a team of analysts and our institutional clients through both crises.

At that time, our clients included some of the biggest hedge funds in Europe, pension funds, and even central banks.

So we’re talking about billions of dollars on the line.

Do you think when the market tanks, these institutional investors do nothing and just wait for the storm to pass?

Of course not. They can’t afford to. When you have billions on the line, even a small down move could mean hundreds of millions in losses.

That’s why they use all forms of advanced strategies to hedge the losses.

And that’s where my team and I came in. We developed several strategies following this “all-weather” approach.

The idea is simple: You invest in the winners, but you also bet against the losers at the same time.

We were so successful that, later, Goldman Sachs hired me to do something similar for their clients. That’s how I became a managing director at Goldman.

When Enron (the infamous energy giant) collapsed, I led my team using a similar approach. We helped Goldman clients protect their money against positions that had exposure to Enron’s fraud.

Now, we were using very complicated financial instruments and techniques that are only available to institutional investors, like credit default swaps.

But there’s a much simpler version of this strategy that anyone can do from home.

But you can. And that’s why I’m sharing this with you all today.

A Strategy That Can Work in Any Market

See, we may be at the beginning of a stock market “winter.”

The combination of inflation and higher interest rates is slowing down the economy. Consumers and businesses can now afford less than a year ago. That means it’s fair to say we can expect lower profits.

What to do? What hedge funds have been doing for decades. That is, playing a relative game.

Once you pair the two trades, it doesn’t matter what the market does. All that matters is how your winner does relative to the loser.

Let’s take an example from 2022. In the chart below, you can see last year’s best and worst performers… 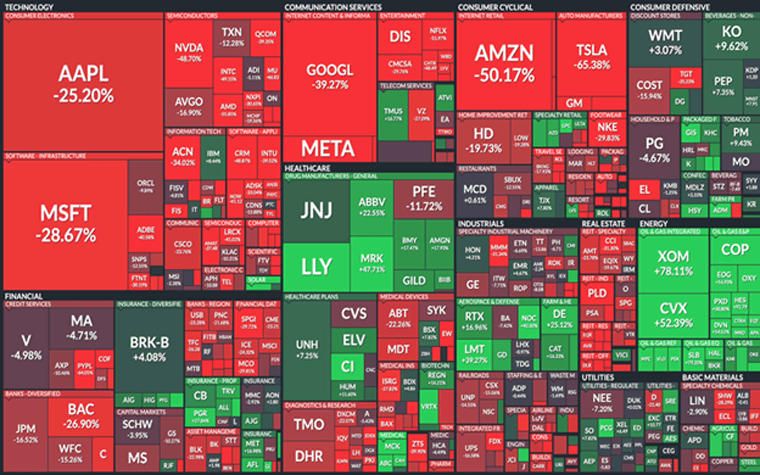 You might have guessed that, due to the war in Ukraine, oil companies would do well. Then you could have chosen ExxonMobil (XOM) as a winner.

On the other side of the trade, you could have chosen Intel (INTC). That’s because computer chips are a very cyclical business. When the economy slows, chip companies tend to do worse.

If you combined a bet on Exxon with a bet against Intel, this would have been the performance of the trade over 2022… 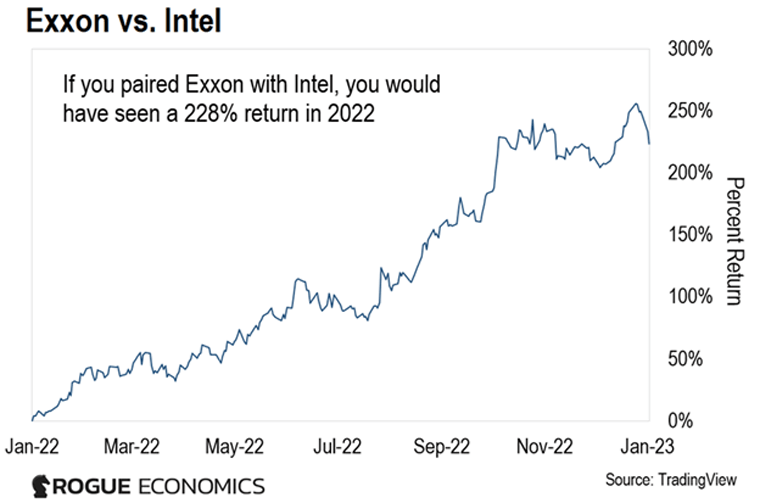 But let’s say you didn’t have the best insight, and you thought that Pfizer’s stock (PFE) would do well (it didn’t).

So you paired a bet on Pfizer with a bet against Intel (INTC). You would have gotten the following performance… 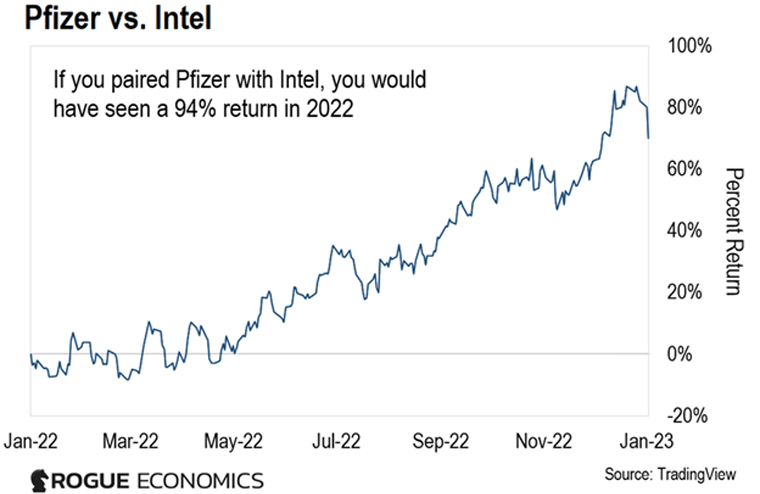 As you can see, the return on this trade was 94.3%. So even betting on a loser against a bigger loser works beautifully.

Of course, hindsight is 20/20. And not every pair trade will be a winner. But there’s a reason hedge funds love this strategy…

Because in volatile times like today, it can really help tip the scales in your favor.

As I mentioned, this is a very popular strategy on Wall Street. In fact, research firm BarclayHedge looked at the best-performing hedge funds over the last five years.

The No. 1 was a fund called Skye Global. And they follow a similar approach of not only betting on the winners but also betting against the losers.

Or look at legendary investor Bill Ackman. He once turned $27 million into $2.6 billion in what The New York Times called the single best trade of all time. His hedge fund, Pershing Square, also follows this approach.

And when I was on Wall Street, we used this all the time. Especially when markets were volatile, like they are now.

Get Ready for This $46 Trillion Shift

Over the past few months, I’ve been working behind the scenes to find a way to bring it to you, too.

See, a law recently went into effect that will help the government trigger a historic $46 trillion shift in the market.

And I want to help put you on the right side of that shift.

I believe that, in the coming weeks, some stocks will crash and maybe even go bankrupt…. while others will skyrocket.

And if you don’t know what’s really going on in Washington, by the end of the year, you could be the one holding the bag.

Fortune even warned its readers to “buckle up for more carnage.”

If you end up getting stuck with the losers, 2023 could end up being even worse than 2022.

That’s why last week, I went live during a special event to uncover some of the biggest government winners and losers of this market shift. If you didn’t tune in, make sure you catch the replay of the event here.