“Let’s make some money… What ideas you got?”

My dad’s co-worker asked me this a couple of weeks ago.

It’s a question I get often. Usually, I answer by mentioning one of my favorite speculations. That’s what most people are looking for.

But I said something different this time.

I then explained why I think it’s a good time to hold more cash than usual.

I could tell he was disappointed with my answer. He was looking for a hot stock tip.

But I hope he took my advice…

• Stocks are taking a beating…

And it’s down 10% since October 1. The Nasdaq has plunged 13% over the same period. And the once high-flying FAANG stocks are down an average of 27% since their highs.

U.S. investors haven’t been through this in years. But as I mentioned in this Dispatch, several key indicators suggest more downside ahead.

There are a couple reasons for this.

One, we’ve been told our whole lives that you make money in stocks by buying and holding. And this strategy works… over long periods of time.

But many Casey readers don’t have decades of compounding in front of them. They’re looking to retire in the next five or 10 years, possibly sooner.

If that sounds like you, you can’t afford to do nothing when the market looks weak… or worse, is plunging.

But there’s another thing keeping many investors complacent during these turbulent times.

• “Buying the dip” has worked well…

This is when you buy stocks on weakness or during pullbacks.

It’s a strategy that’s worked brilliantly in recent years. See for yourself. 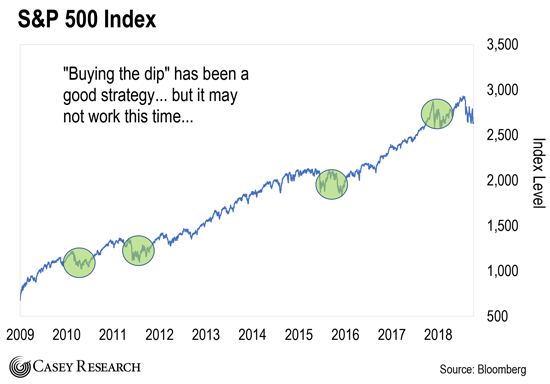 All bull markets eventually end. This one, which is already long in the tooth by historical standards, won’t be any different.

Of course, the recent sell-off could turn out to be another great “buy the dip” opportunity. Only time will tell.

But I will say this…

For one, the yield curve is close to inverting. The last time the yield curve was inverted was from December 2005 to June 2007. And we all know what happened after that.

Not only that, high-grade corporate bonds are now on track to have their worst year since 2008. This tells us investors are getting nervous about lending to even the strongest companies.

• So consider taking some precautions if you haven’t yet…

Holding extra cash is one of the easiest ways to do this.

This will cushion you against big losses should stocks keep falling.

Now you’re probably wondering, “How much cash should I hold?”

Unfortunately, there’s no one-size-fits-all answer to this question. It depends on the size of your nest egg, your retirement goals, when you plan on retiring, and a number of other factors.

You’ll have to decide how much cash is right for you. But I will say this.

That would be as reckless as staying all in on stocks.

Instead, lighten up on your weakest positions. I’m talking about overpriced stocks and heavily leveraged companies. These are not what you want to own at this stage.

These companies sell stuff that people buy no matter what’s going on with the economy. That makes them relatively safe investments in this environment.

Plus, there’s a chance these stocks will deliver big gains if the U.S. economy takes a turn for the worse. After all, Dollar Tree’s stock jumped 61% in 2008 during the financial crisis. Walmart shares rose 20%. The S&P 500, for comparison, fell 38% that year.

In short, holding extra cash and owning defensive stocks will help you sleep easier at night. And that’s something a lot of investors could use right now.

Greatest two-part interview with Doug and Justin. I bought my first car in 1951, a 1031 Model A roadster. I was one of the 16-year-old kids Doug talked about. I had a car every year until I moved to Brazil in 2009. I did not buy one here. But I did renew my driver’s license this year. Yes, I’m 84 years old and I walk all over town. Sometimes 5km or more. If I go grocery shopping and have lots of heavy items, I call Uber. Gramado is 90 km north of Porto Alegre. If I want to go there, I take a bus and a train. If I need a car I rent one. I agree 100% with the many points Doug makes. It makes no sense to own a car and leave it stored unused most of the time. I am eagerly waiting for the day when a driver-less Uber will take me where and when I want to go.

Doug and Justin, the number one commodity in the world is safe drinking water. Why not discuss the technologies that are required to purify water? As to lowering the use of oil, arms manufacturing may be the stock to consider. Once the oil-rich countries find themselves becoming poor, the masses will rise up.

Doug’s comments are pretty much in line with my thoughts. However, I think of road trips, where the limits on battery capacity are likely to limit the range of EVs. Perhaps there will still be recharging stations every 50-100 miles, sort of like there are truck stops now, but they will be designed differently.

Even if you can get an 80% charge on a battery in an hour, instead of just a quick 7-11 type store where you grab a snack and go, a recharging station will have facilities to entertain you (and your kids) for an hour or more, and will compete on how they go about it.

And having lived most of my life in the American West (I now live in Ecuador), the concept of “driving range” on a full charge will also have to take into account elevation changes. Your battery indicator may show that you have 225 miles of range remaining, but if you are about to travel from your current elevation of 5,000 feet to cross a pass at over 9,000 feet, that battery is going to drain in a hurry. Of course, the ideal would be to arrive at the top with less than 10% remaining, and let gravity recharge your batteries on the way down, but I suspect that recharging stations part-way up such passes would get a lot of business.

Of course, a self-driving car would have all the elevation differences included in its maps, and would know exactly when and where to plan recharging stops. The weight of the load matters, too. A family on a vacation to Yellowstone with all their stuff is going to have to stop more often to recharge than a lone passenger who’s just headed from point A to point B. Interesting times.

During this webinar, he’ll give you the inside scoop on an event that will transform the crypto market in 2019… He’ll also show you a leaked Wall Street document that reveals what this event is.

Plus, he’ll announce his bold, new venture that could hand you the chance at an extra $81,624 per year. The only way to get your invitation is to register for the event. Click here and enter your email address for free access right now… 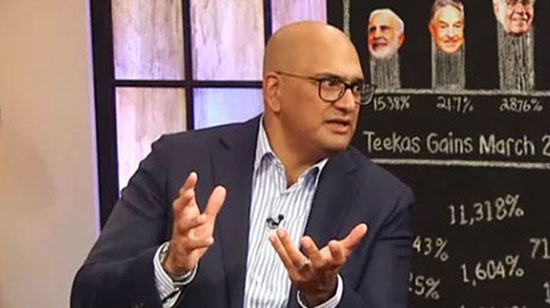