Super Spikes are massive, wealth-building opportunities. They’ve happened reliably and repeatably throughout the past century.

During Super Spikes, investors make hundreds – even thousands of percent gains. It’s a rolling boil of profits, where one hard asset after another spikes and makes people rich.

These last few weeks, I’ve been pounding the table on the current Super Spike window.

And right now, I’m extremely busy traveling the world to find ways to position for these coming gains.

But I dropped everything this week to put together a special event called the Super Spike Summit. It’s designed to give you all my research on what Super Spikes are, why they happen, and how they’ve made investors rich in the past.

I went live with the Super Spike Summit last night. But don’t worry… if you missed it, you can watch the replay here.

I don’t blame you if you’re skeptical. I’ll admit, my Super Spike research sounds too good to be true. Not one, not two or even three, but numerous profit opportunities all going off at once?

A lot of people are doubtful. Some are even suspicious it might be a scam.

I don’t blame them. It sounds that fantastic.

But you don’t need to take my word for it. You can see the Super Spikes happening around us…

In February, nickel metal soared over 200% in a single day. That’s one of the most incredible jumps the nickel market has ever seen.

And last week, I showed you how rates for diesel fuel enjoyed their own Super Spike.

And this week, it happened in a completely different commodity.

You might’ve never heard of ethane before. Or it might vaguely ring a bell from some of the gas pumps at your local fuel stop.

Ethane is a specialty petrochemical. It’s related to natural gas and oil.

Across America, ethane is big business. It’s used for making many of the plastic products that support our everyday life.

You probably didn’t hear about the ethane Super Spike. Most investors don’t track this chemical, despite all its common uses.

The mainstream press sure isn’t covering it.

That’s a huge opportunity. Check out the Super Spike ethane’s been on. 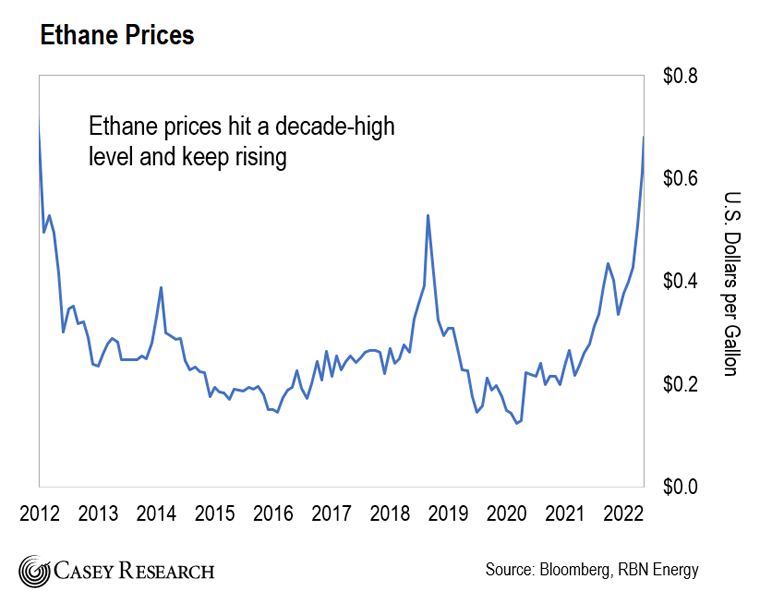 Since the beginning of the year, ethane prices in America doubled. That’s continuing a Super Spike in motion since 2021.

And in the past few weeks, the surge accelerated even more…

How to Create Wealth Using My Strategy

Now, you probably don’t want to buy barrels of ethane. If you’re like me, you don’t even want the hassle of opening a complicated options account to trade paper futures.

Here’s the great thing: you don’t have to. There are plenty of easy ways to profit from the ethane Super Spike – right from your existing brokerage account.

This week, I recommended a new stock to readers of my Super Spike Advisory. It’s a giant of American industry – although few investors have heard of it. (Paid-up subscribers can catch up here.)

You could type three letters in your brokerage account and buy this company within moments.

This stock directly benefits from the Super Spike in petrochemicals like ethane. It owns some of America’s most critical infrastructure for moving and storing energy.

Even better, this firm pays a fat distribution to investors. The current yield is over 6%. That’s more than three times higher than the 1.5% currently paid by the S&P.

Essentially, this stock pays us to bet on the Super Spike. And if commodities like ethane keep surging, it could be one of the biggest winners on Wall Street.

Winning stocks aren’t easy to find these days. Make it easy on your portfolio by following my Super Spike model.

To find out more about my strategy, make sure you tune into the Super Spike Summit replay here. You owe it to yourself – and your wealth – to consider all the facts.

And according to my research, this week’s ethane boom is just one example of an existing Super Spike. There are plenty more coming.