For several months, I’ve had my eye on a particular stock.

I’m embarrassed to tell you the name.

It’s not that the company performed badly. Quite the opposite – it rocketed for triple-digit gains in just eight months.

The stock crushed the wider indexes. It delivered 10x better gains than the S&P 500.

The way it’s trading, it could do even better in the coming months.

But I’m reluctant to mention it. It’s just… strange… compared to the stocks I normally cover.

Because at Casey Research, we swing for the fences with our smart speculations.

We look for stocks that deliver 100% returns or better. The kind with an outsized impact on your portfolio, even for a small amount invested.

We look for new sectors lighting a fire under corporate profits. And there’s one sector in particular delivering some of our biggest recent gains.

And it’s been a profit machine. For example, we uncovered a little-known car charging stock, Blink Charging, in 2019. The warrants on that company skyrocketed over 2,805%.

(These are open positions, so I can’t reveal the names and tickers out of fairness to paying subscribers. If you’re not a Strategic Trader member, you can learn about how we’re using warrants in the EV market to make enormous gains right here.)

With such proven profit potential, you can see why I’m focused on EVs.

My research on ultra-profitable EV stocks led me to the company I’m talking about. I couldn’t believe it. When I tell you the name, I bet you’ll be shocked, too.

If you’re reaching to click away, I don’t blame you. I’ll freely admit – claiming a dinosaur stock like Ford as a thrilling tech play sounds insane.

But the numbers don’t lie. I’ll show you in a moment.

First, though, try this. Imagine I told you the hottest tech play for 2022 is… electric car giant Tesla.

This seems totally sensible. After all, Tesla gained 1,300% the last two years. It was one of the most captivating stocks on the market.

But here’s the shocking thing: Ford is crushing Tesla.

The “dinosaur” has been beating the tech darling… consistently for the last seven months. 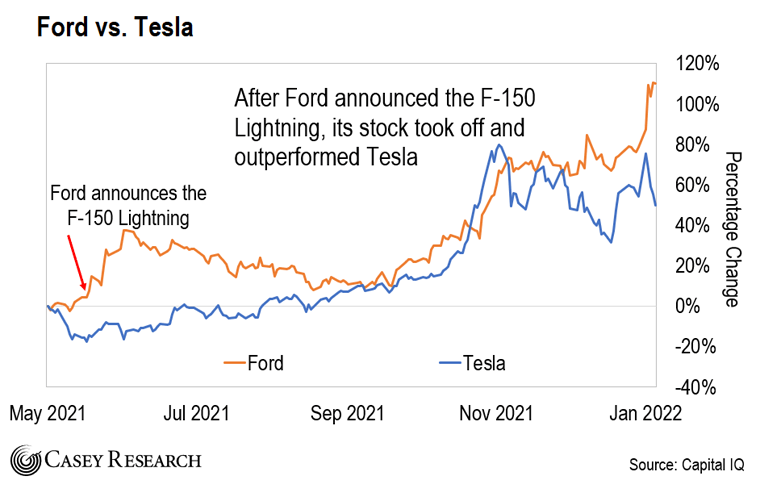 In fact, Ford’s dominance over Tesla is growing. So far in January, Ford is up 10% – while Tesla plunged 12%.

In May 2021, Ford revealed its all-electric F-150 Lightning truck. Overnight, the company went from old to bold in the minds of consumers… and investors.

Ford Is Looking to Compete

Ford plans to sell 80,000 electric trucks this year. That’s about the same number of units Tesla shipped in 2016.

The pattern is clear. If Ford delivers, the company is on pace to produce and sell as many EVs as Tesla.

There’s no reason it shouldn’t. We’re talking about a 120-year-old company with more physical resources and infrastructure than Tesla had when it started.

There’s only one spot Tesla’s had a leg-up on Ford: cash. Since 2010, Tesla raised about $30 billion in investor financing. During the same period, Ford raised just $5.3 billion.

An extra $25 billion gave Tesla the rocket fuel to grow its business.

With Ford’s stock on fire – and its transition to EVs grabbing headlines – attracting funding like that is entirely possible.

That could blow the lid off. Ford’s market value right now is just over $93 billion. By comparison, even with its recent sell-off, Tesla’s at nearly $1.1 trillion. 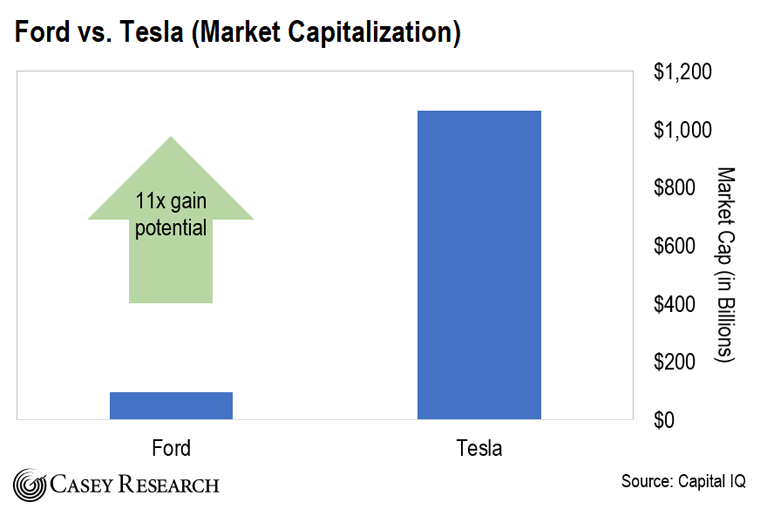 If Ford attracts just 10% of the investment Tesla has, it could rise another 118% from current levels. It would mean another year of this dinosaur absolutely crushing the wider market.

That would set Ford up for a 10-bagger.

You might doubt it. Again, I don’t blame you. Many investors doubted Tesla before it began its monumental rise in 2019.

Those who saw the opportunity, however, made life-changing gains in the last 24 months.

The next opportunity for those gains might come from a stock that seems just as unlikely as Tesla did in 2019.

Unexpected or not, if Ford has that kind of potential, I’m paying attention.

P.S. We’re closely following this space in my publications. In Strategic Trader, we’ve got an EV play – basically backed by Jeff Bezos – that could be our next quadruple-digit winner. That’s 1,000% or more.

Check it out here.