Like any downtown gas station, it’s got a series of parking spots. There are overhangs to protect customers from the rain. Beside the pumps, there’s a shop selling snacks. 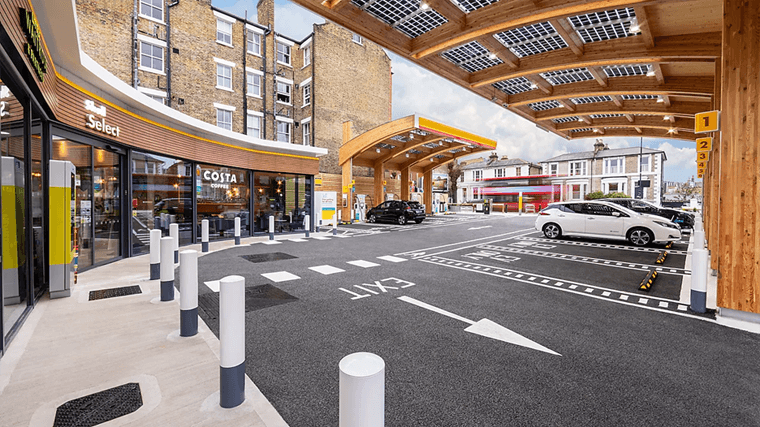 But a closer look reveals this newly opened station is anything but ordinary.

First off, vehicles don’t park lengthwise beside the pumps. They enter headfirst.

That’s because these aren’t actually pumps.

Electric All the Way

In fact, Shell’s newest “gas station” doesn’t have a drop of gas for sale. It’s entirely dedicated to electric vehicles.

It seems like a showcase – something Shell would do at a loss to prop up its green image, teasing a future still decades away.

But here’s the shocking fact: for major oil firms, EV charging just became as profitable as selling gasoline or diesel.

And I mean today. Not in the future. Right now.

A charging station like Fulham now makes the same margins as a traditional gas station.

In fact, an insider at oil major BP revealed last week that EV charging may soon be a bigger money maker than gas stations.

She said, on record:

We are nearing a place where the business fundamentals on the fast charge are better than they are on the fuel.

That’s because of the unbelievable growth in demand for EV charging.

The BP insider let slip that, in fact, profits on charging may have overtaken traditional fuel back in autumn of last year.

During the third quarter of 2021, demand for charging surged an incredible 45%. Remember, that’s compared to the previous quarter – so we’re talking about an extreme demand increase in just three months.

BP and other oil firms are suspiciously quiet on what’s happened since then. I suspect they don’t want to reveal just how profitable charging has become.

But it’s no coincidence that Shell opened its flagship station this month. You can bet oil firms across the planet are racing to do the same and cash in on the charging boom.

It seems like this came out of nowhere. But the charging boom has been years in the making.

The Tipping Point for EVs

It all pivots on the right technology.

Up until late last year, most chargers were slow. You had to hook up for hours in order to energize a vehicle.

That obviously doesn’t work for a gas station. If you want margins the same as a traditional fuel stop, you need customers in and out within minutes.

Shell came up with a tech solution: nine 175kW chargers that take almost any electric vehicle from 0 to 80% charged, in just 20 minutes.

These new “gas stations” are selling more electricity, faster. Even better, the size of typical EV batteries is increasing, so a single customer buys more power each time they visit the station.

This is a game-changer for oil stocks.

Take Shell, for example. Most investors see the company as an oil driller. But in fact, Shell is an energy seller – 85% of its revenues in 2020 were from its downstream segment, which includes fuel stations.

Shell’s valuation plummeted in recent years because investors see it as a dirty, old business. Billionaire investor Dan Loeb recently called it “one of the cheapest large-cap stocks in the world.”

Imagine Shell converts a portion of its gas stations into ultra-modern charging points. Suddenly, this industry giant becomes investor-friendly – with a lot of upside in its share price.

What if Shell got rid of gas stations completely? This isn’t as crazy as it seems. In December, Europe sold more electric vehicles than diesel-powered vehicles. That’s the first time ever EVs outsold traditional fuel engines.

That gives Shell – and other oil majors – heaps of room to grow their charging business (and shrink their gasoline sales). BP said it aims for 540% growth in its fast-charging business.

That would vault these boring dinosaurs to hot tech investments.

And that’s just one idea on profiting from the charging boom.

The rollout of charging stations will need new technology, cutting-edge batteries, custom microchips, even new systems for safety and cybersecurity (a recent study found that, yes, charging stations can be hacked).

The charging boom is a universe of profit opportunities. And it’s happening right now.