A key U.S. industry is sending us a warning.

And it could spell serious trouble ahead for the economy at large.

The good news is that there’s still time to protect yourself. I’ll show you how to do that at the end of today’s essay.

But let’s first turn our attention to the struggling industry.

• I’m talking about the auto industry…

Specifically, let’s look at vehicle inventories… which are swelling across the nation right now.

In fact, Casey Research analyst Houston Molnar tells me that he sees this issue every day. Dealership lots are overflowing with unsold cars.

One dealership even started storing vehicles on an undeveloped plot of land across the street, after it ran out of parking space. Another dealership is moving its inventory to the nearby grocery store parking lot.

• But this isn’t just happening in South Florida…

According to Bloomberg, the average new car spends 73 days in a dealership’s lot before being sold. That’s up from 67 days in June.

And experts expect this figure to reach 78 days when data for December 2018 is available. That would represent a 16% increase in just six months.

There’s a good chance that happens. I say this because, according to the Federation of Automobile Dealers Association, passenger vehicle inventory jumped nearly 34% from December 2018 to January 2019.

Not only that, Ford’s total sales are down 28% over the past year. Hyundai’s are down 21%, while Toyota’s and Nissan’s are down 3% and 2%, respectively.

Of course, there’s a reason why dealerships across the nation are struggling to move inventory…

• It’s getting more expensive to buy a vehicle…

And that’s because interest rates are rising…

In December, the Federal Reserve lifted its key interest rate for the fourth time in 2018… and the sixth time since the start of 2017. This benchmark is now sitting at its highest level since April 2008.

This is a big deal. The Fed’s key interest rate sets the tone for rates across the economy. The Fed effectively made it more expensive to finance a new car.

According to Edmunds, last month the average annual interest rate on a new vehicle sat at 6.19%. That’s up from 4.99% a year ago. It’s also the second-highest rate in a decade.

Not only that, the number of buyers getting 0% interest rate loans has also fallen to the lowest level since 2006.

• The auto industry can’t afford for this to continue…

The chart below says it all. You’re looking at how much total outstanding auto loans have grown since 2009. 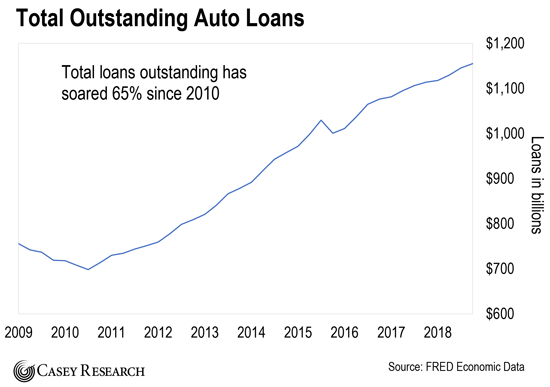 So a healthier consumer hasn’t been fueling auto sales. Cheap debt has. And if it goes away, the auto industry could run into serious problems.

Which, as we showed you in last week’s Dispatch, looks to be the case.

In fact, the Fed could even cut rates if the U.S. economy peters out.

But that wouldn’t stop the auto industry from falling on hard times.

That’s because the Fed doesn’t control every interest rate. It merely sets the tone.

Borrowing costs could keep rising even if the Fed stops raising rates or even cuts rates again… especially if we see a major uptick in delinquencies or defaults.

But higher borrowing costs isn’t the only major headwind facing the auto industry.

• The U.S. economy appears to be slowing…

This isn’t a coincidence. Like the auto industry, the housing market relies heavily on cheap credit. That means it, too, could be in serious trouble if rates keep climbing.

These industries could get hit if rates keep rising… or the economy slips into recession.

If both happen, look out below.

P.S. Like me, E.B. sees trouble ahead for the U.S. economy. That’s why he says it’s now more important than ever to have a specific plan of attack… a whole new approach to making explosive gains in 2019.

It all has to do with a little-known strategy that both E.B. and Doug Casey have used to book big winners. This strategy can hand investors 10x bigger gains than options… yet it still flies under the radar today.

Fortunately, E.B. and Doug will share exactly what this strategy is (and why you absolutely need it in your arsenal in today’s market environment) in a landmark event on February 27: The Stock Market Escape Summit.

Doug, never forget that this country, the United States, is headed down, down, down. Our nation is being ripped apart and the fine people who voted in random presidents don’t care, won’t defend freedoms, etc.

We’ve had Venezuela in our sights since 1998 as an official “to do” project. Our intentions, the intentions of the bankers, are bad, horrible, and rapacious. We live in a nation that is essentially disgusting, like it or not.

Decrying the problems of Venezuela without looking at our own moral squalor is simply pathetic. 1984 is just around the corner.

Doug, I can’t get too enthused about any sort of intervention in Venezuela or anyplace else in Latin America.

We have no strategic or economic interest in that part of the world – our nation is now totally energy independent and will be for the foreseeable future. And with two sons as military pilots in damned dangerous jobs I can’t get too supportive of unnecessary foreign adventures, which rarely turn out as expected, as we learned in Vietnam (my war).

Always look forward to, and enjoy, your columns.

Obviously, the bankers who own the “Fed” lost control of the Venezuelan central bank – that’s usually what precedes a war and sudden, obsessive media coverage.

I find it strange your constant concerns about America being all about regime change in a way that makes it sound as if it’s the only country doing it. The U.S. has, for better or worse, recognized communism/ international socialism as a militant force that is grabbing at power at the expense of high loss of life. Sometimes it comes across in your commentary, as those lives are worthless in relation to the U.S. wanting to stand with the victims of brutal regimes. It’s almost like a different narrative could be written, where America was maybe actually trying to thwart real imperialism from the likes of communist Russia who spent billions on propaganda in the U.S. during the Vietnam war.

“How would I solve the situation? It’s essential to get the power and money out of the hands of the State. The only way to defuse this situation is to probably take 100% of the State’s shares in the Venezuelan oil company, and divide them, pro rata, to all the people in the country.”

The above I agree with wholeheartedly. Only recently, I was thinking and came to a conclusion that all assets belong to the people of the country, not the government. The government should be just to administrate the assets. If they don’t do well, they can be removed. But everything belongs to the people.

I also agree that the U.S. is an aggressor, not a liberator. That ended with WWII. My grandfather was killed in WWI and is buried in France. My Dad was in WWII on the USS Santa Fe light cruiser, and in every battle in the Pacific. My brother was in Korea on a carrier. I was in Vietnam. And that was just to keep the drugs coming out of Burma. I taught my sons and grandsons to stay out of the military and they have obeyed.

Keep up the good thinking.

Internet service providers – companies that hook up internet to your home – are the most hated companies in America. They charge Americans exorbitant prices and never show up on time.

But Silicon Valley insider and technology expert Jeff Brown says that’s all about to change. And smart investors stand to make a small fortune when this “Wi-Fi killer” hits American homes. 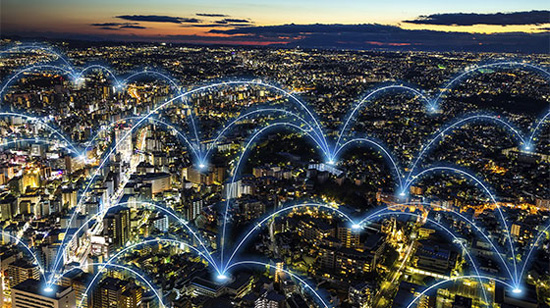