Rachel’s note: At Casey Research, we’re contrarians. We like to buy assets when there’s “blood in the streets.”

That’s how you make money. Not at the height of the hype… or when everyone and your drycleaner are discussing what you should be buying.

Right now, the crypto market appears to be at a point of maximum pessimism. But history has proven time and again, that’s the best time to pick up quality investments, like a stake in Bitcoin…

Casey Research friend Nomi Prins lays it all out below.

The crypto space has come under tremendous pressure recently. Its value has plummeted from $2.16 trillion in early April to $909 billion today. That’s a 58% decrease in just over two months.

Now, I’ve written to you in the past about why I believe Bitcoin deserves to be included in your portfolio.

But I know many of you remain skeptical about cryptos in general. And I’m sure the recent volatility in the market hasn’t helped persuade you about its viability as an investment asset.

Today, I’ll show you why I still view Bitcoin as a pragmatic investment over the long term.

And I’ll even show you a way to take advantage of the volatility in the crypto market now to maximize your potential future gains.

But first, let’s take a look at why cryptos are so volatile right now…

The Events That Roiled the Crypto Market

One reason for crypto’s horrendous performance of late is volatility among so-called “stablecoins.” Stablecoins are digital assets. Most derive their value from being fully backed by reserves (dollars and low-risk fixed-income securities).

For crypto investors, they provide a way to deal with crypto volatility. That’s because they are usually relatively price-stable digital assets.

But others are what you’d call algorithmic tokens. This means they derive their value from computer code. These stablecoins need constant market activity to keep their dollar peg.

This is what happened last month, when one such stablecoin called TerraUSD (UST) went up in algorithmic smoke. The price of UST fell from $1 on May 8 to around $0.18 on May 14.

The UST debacle caused fears for the stablecoin space as a whole. And this had a knock-on effect on the rest of the crypto market.

Then, crypto lending platform Celsius made an announcement that further rocked the crypto market.

On June 12, it stated that it was suspending all withdrawals on its platform. This essentially froze up to $8 billion in deposits.

This added fuel to the crypto bonfire.

We’ve Been Here Before

But plenty of successful tech businesses founded during that time still dominate today. These include household names such as Amazon, Microsoft, Apple, Google, and Nvidia.

In other words, the bursting of the dot-com bubble did not completely wipe out the potential of tech or the internet.

And I believe that’s where we are today with crypto.

Crypto is based on blockchain technology. And blockchain is the latest technology to go through this boom-and-bust cycle.

Making all the headlines, of course, is Bitcoin, the first crypto to be built on the blockchain.

Bitcoin has gone through multiple boom-and-bust cycles in its relatively short existence.

Then, it skyrocketed roughly 1,800% over the following 28 months. 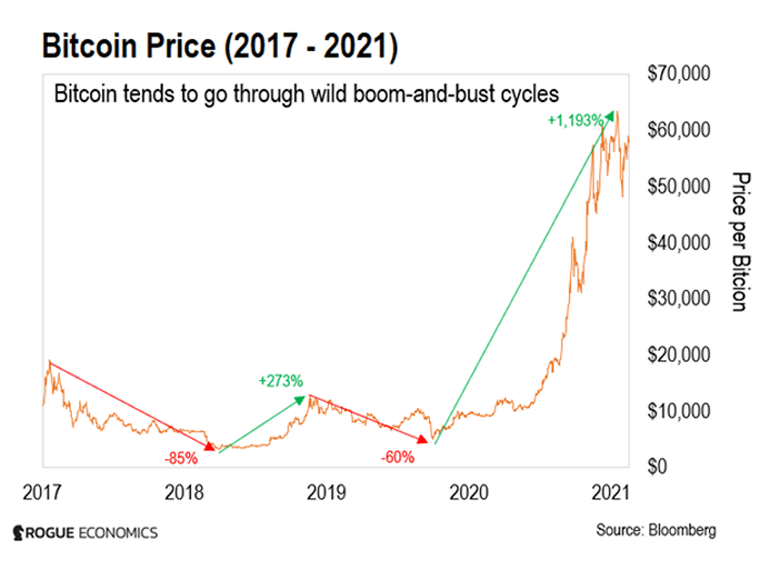 During every bust, the skeptics wrote Bitcoin off. In fact, according to the website 99bitcoins.com, it has been declared dead 455 times already.

But not only has Bitcoin proved the naysayers wrong every time… it has always emerged stronger than before.

So, if history is any guide, Bitcoin will make a new high after this bear trend is over.

Bitcoin Will Dominate During This Bear Market

Bitcoin dominance is its percentage of the total crypto market cap. It’s one of the most important – but least-known – metrics in the space.

Today, the Bitcoin dominance rate is about 43%. That’s up from 38% just two months ago.

And when Bitcoin’s dominance rises, other cryptos – so-called altcoins – fall…

So, during crypto bear markets, altcoins decline by more than Bitcoin because of their greater risk profile.

We saw this phenomenon play out in the 2018 crypto bear market. 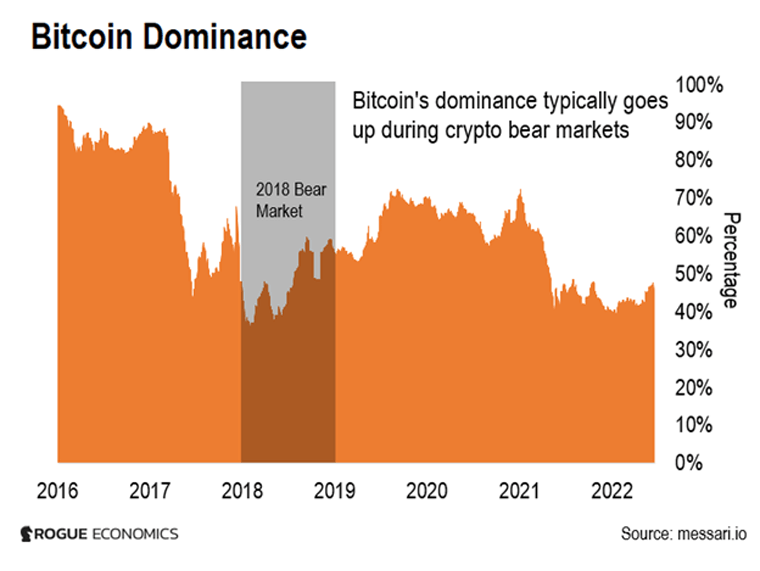 But Bitcoin dominance went up from 36% to 60% during the same period.

Today, Bitcoin dominance is starting to creep up again. It went from 38% in January 2022 to 47% earlier this month.

And, despite the recent downtick, with the crypto bear market still in full swing, I don’t see this trend reversing anytime soon.

This means it’s best to avoid altcoins and just stick with Bitcoin, if you are involved in the crypto market.

To be clear, we’re firmly in a crypto bear market right now.

But that’s not necessarily a bad thing. And it certainly doesn’t mean it’s time to give up on Bitcoin, despite what the naysayers think.

Quite the contrary. I still believe that holding Bitcoin in your long-term investment portfolio is a pragmatic thing to do.

See, when Bitcoin was launched in 2009, it was positioned as an opposing force to the Federal Reserve. The idea was for Bitcoin to be an exchange currency, outside of the control of global central banks.

The Fed’s policies had helped to bail out Wall Street after its extraordinary money heist. Through interest rate reductions and quantitative easing (QE), the Fed fabricated trillions of dollars of cheap money.

This led to The Great Distortion between the markets and the real economy. And of course, today’s spiraling inflation.

But unlike the Fed’s seemingly infinite supply of U.S. dollars, the new Bitcoin supply drops by 50% roughly every four years. This is known as “halving.”

Basically, the reward Bitcoin miners receive for solving the transactions on the blockchain gets cut in half. And the price of Bitcoin explodes.

I wrote to you earlier this year about how halvings spell opportunity for investors.

As of writing, there are 19 million Bitcoins in existence. That’s about 90% of the total potential supply of 21 million that’s written into its code.

But because of the halvings, the remaining 10% of new Bitcoins will be added at an ever-decreasing rate.

And as the number of new Bitcoins coming into existence decreases, each one will become more valuable.

The next halving event will happen in May 2024. This will draw a continued influx of deep-pocketed new investors (and regular buyers) attracted by Bitcoin’s anti-inflationary qualities.

This may not happen today or tomorrow, but I believe it will happen some time over the next 24 months.

So for anyone investing in Bitcoin, my advice is to simply put a fixed amount of money into it on a regular basis, typically monthly. You may buy more of it when the price is low and less of it when prices are high. This is called dollar-cost averaging.

PayPal or Block’s (previously called Square) Cash App may be the most convenient options for doing this. With these popular apps, you can start your Bitcoin portfolio with as little as $1.

That said, you should never borrow money, or leverage yourself, to buy Bitcoin. You should only invest money that you don’t need to use right now, and that you can position for longer-term investments.

I believe the Fed will soon back off the hawkish stance it has adopted recently in a vain attempt to fight inflation. When that happens, the uncertainty driving Bitcoin – and other assets – down right now will abate and reverse.

So you need to be in a position to take advantage of that.

Happy investing, and I’ll be in touch again soon.

P.S. While holding Bitcoin for the long run is a great idea… it’s not the only thing you can do to ride out the volatility in the crypto market right now. I’ve designed a strategy that can help you profit – even if the crypto markets fall further in the short run. Check it out right here.