It seems hard to believe.

And there isn’t an algorithm in sight.

Instead, this system consists of a man… and a lot of grunt-work.

The result is quite possibly the single best investing track record we’ve ever seen.

How does it work? We’ll show you now…

Today, we turn our attention to an investing system that has a 92% win-rate. Something that many may think is too good to be true.

Here’s what the man who developed this system says about it:

In 110 out of 120 cases, companies reached [the target]. Five of the remaining 10 stocks were bought out by larger companies before they [hit the target]. The other five companies failed to [make it to the target].

Here’s the crucial point: For the 110 successful… companies, the average gain was 105%.

That means, on average, nine out of every 10… stocks doubled…

And what makes it even better is that the man behind this system says that it’s “a reliable and repeatable formula for profits.”

The numbers show that. The 92% win-rate proves the reliability of this system. And because this has happened over many years – on 110 different and unique occasions – it’s proof that it’s repeatable.

We don’t know about you, but we can’t think of any other “system” that can produce such reliable and repeatable returns.

The win-rate is so good that it beats what we would hope for using our Casey “10 x 10” Approach. For our newer readers, that’s where you select around 10 mostly speculative stock plays in about 10 unrelated categories.

With that strategy, you’re comfortable with a 60-70% win-rate. But because the wins are so much bigger than the losses, you still end up with a big overall gain. If you can add a “system” into that approach, which produces a 92% win-rate, all the better.

So who is the man behind this system? And where does he find winners with such regularity?

The Golden Runway to Profits

The investment expert in question is Dave Forest.

Dave is a geologist by training. He has worked in mining and petroleum for over 20 years. He has founded his own mineral exploration and development companies. He has raised over $80 million in equity financing from some of the most well-known resource investors in North America.

His past successes include the development of a 10-million-ounce gold deposit in Colombia. He was also the first to be granted a modern exploration license in Myanmar.

Dave is the genuine, real deal when it comes to resources. And it’s because of that expertise and his “system” that he’s able to find these winning picks on such a regular basis.

As for the system, on the surface, it looks easy. But there’s a lot of work that goes into making it look easy.

Dave calls it “The Golden Runway.” Before we get Dave to explain how it works, check out this diagram: 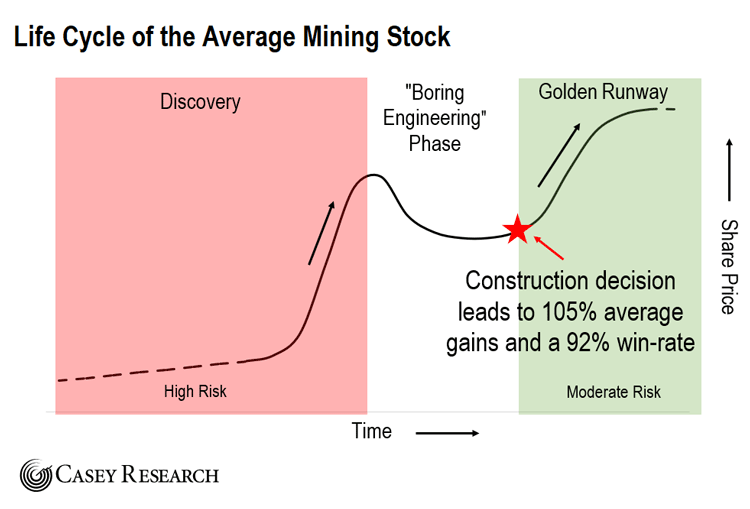 As Dave explains it (we’ve hidden the names of the stocks and projects to protect the integrity of Dave’s paid research):

A company begins in the red zone at the left, where it’s searching for a new mineral discovery. When it finds a new deposit – usually through drilling – it enjoys a big run in share price.

We’ve seen that with [stock name redacted] which jumped from C$0.40 to almost C$3 on a big silver find in Mexico. Another recent example … surged 60% in the first two weeks of June because of excitement over results from its project….

After finding a new deposit, things change. The company enters the “boring engineering phase,” the white zone in the middle of the chart. It knows what’s in the ground – now it has to figure out how to mine it.

This usually takes years of studies on dense topics like rock quality, hydrogeology, and metallurgy. It’s not sexy. Almost always, investors get bored and sell off the stock – no matter how good the project is.

At some point, the company decides everything looks good. It calls a “construction decision,” which is an official commitment to move forward building a mine. That’s when we enter the green zone at the right of the chart.

That’s when Dave tells folks to buy. Because as he says:

At the construction decision, the runway is clear for the company to go into production. But the share price usually still lags because of investor boredom. This lets us buy on the cheap.

After the construction decision, investors realize the company is on course to become a new producer. The share price rises as the prospect of cash flow gets closer.

That’s how Dave achieves that 92% win-rate.

The Numbers Prove This Works

It’s by knowing when it’s statistically the right time to buy. That’s when it has the greatest chance of paying off.

And not in a small way, either. To recap, not only does Dave pick a winner 92% of the time, but on average, these picks more than double – a 105% return, to be precise.

Just remember one thing, it takes hard work to find these stocks at the right time. Especially in mining. Because as the founder of our business Doug Casey often says of the mining industry:

It’s the worst business in the world from a business point of view. It’s a crappy, 19th century choo-choo train business. But the good news is that when these stocks are cheap and when everybody hates them, they are explosive on the upside.

That’s the key. Dave estimates that for every thousand mining projects – those that appear in the red zone on the diagram above – only one will make it through tough times to reach the green zone.

That’s why Dave’s system works. Rather than trying to pick one winner from 1,000 mining stocks at the riskiest time, Dave prefers to wait until they’ve hit the right stage of development.

Then he makes the play. It’s playing the odds… and Dave makes sure the odds favor him.

The numbers prove it.

Dave has been able to take the same studious approach to getting in on the right play at the right time and snag even bigger gains. In one recent case, it resulted in a 4,942% gain. In another, he helped readers bag a 2,805% gain. And in a third, it resulted in a 393% gain… in less than 10 months.

We’ve proven to you today that Dave knows how to pick the right stocks at the right time. Go right here for details on how to join him and how he does it.