Some investors obsess over the jobs report.

Others watch inflation like a hawk. And some fixate on factory orders.

That’s because economic indicators offer clues about where the economy is in its life cycle.

You see, the economy’s cyclical. It booms and busts.

In short, knowing where we are in the economy’s cycle can make you a much better investor.

But there’s an even more important cycle that many investors ignore. And as I’ll show you today, they won’t be able to ignore it much longer.

I say that because this cycle looks like it’s about to turn in a big way. That would have massive implications for the economy and U.S. financial assets.

The good news is that there’s still time to prepare. At the end of this essay, I’ll show you how to do just that…

I’m talking about the credit cycle.

The credit cycle refers to the expansion and contraction of access to credit over time.

For the longest time, the credit cycle took a back seat to the economic cycle. Some investors overlooked it completely. But we’re about to hit a breaking point.

As longtime readers know, the Federal Reserve took the credit cycle by the horns during the last global financial crisis.

In December 2008, the Federal Reserve dropped its key interest rate to effectively zero and held it near record lows for almost seven years.

This unprecedented intervention by the Fed flooded the economy with cheap credit.

They bought everything from new cars to homes… And some even paid for college.

Today, the average American is deeper in debt than ever.

But it wasn’t just everyday Americans who got drunk on debt.

• Corporate America went on an epic borrowing binge, too…

Just look at this chart, which I first shared a couple weeks ago. 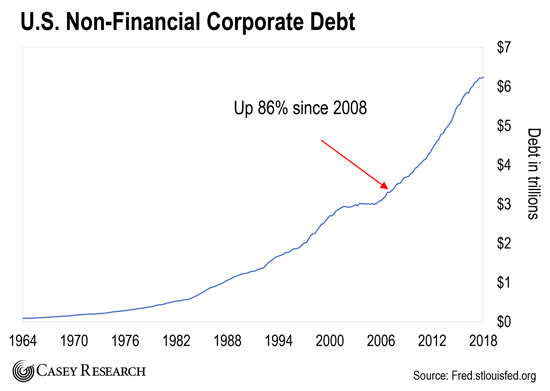 You can see that total outstanding corporate debt is up 86% since 2008. For comparison, the U.S. economy grew just 18% over the same period.

Corporate debt as a percentage of U.S. gross domestic product (GDP), the most popular measure of economic growth, is now higher than it has ever been.

After all, we’re talking about household and corporate debt. Unlike the government, these borrowers can’t print their way out of this mess. They will either have to pay off their debts… or default on them.

And the latter looks more likely with each passing day. I say this for a few reasons…

• Number one, interest rates are rising…

In December 2018, the Fed lifted its key interest rate for the fourth time of the year… and the sixth time since the start of 2017. It’s now sitting at its highest level since April 2008.

This is a huge deal. After all, the Fed’s benchmark rate sets the tone for many other rates.

This means the Fed has also made it more expensive for businesses and everyday Americans to borrow more money… and in some cases, to pay off existing loans.

That’s the last thing the U.S. economy can afford. Of course, there’s talk that the Fed will stop raising rates or even cut rates again to support the economy and financial markets.

But it may be too late for that.

• Appetite for risky debt is drying up…

I say this because the junk bond market has gone cold.

In recent years, investors couldn’t get enough of these bonds. Demand was through the roof. But that’s no longer the case.

According to Dealogic, there wasn’t a single junk bond sale in December. That hasn’t happened since 2008 – the peak of the last global financial crisis.

But it gets worse. The junk bond market went 40 days without a sale. That’s the longest cold streak since 1995.

This tells us that investors are having second thoughts about lending money to companies with shaky credit. That hasn’t happened in years.

If this continues, we could see stress across the debt market. Of course, I’m not the only one concerned by this.

• The “smart money” sees trouble on the horizon, too…

By that, I mean institutional investors. These firms manage huge sums of money. They understand the markets far better than the average guy.

It pays to listen to them. And most of them see major cracks forming in the credit market. In January, CNN reported:

Not a single respondent to the International Association of Credit Portfolio Managers survey anticipates default rates will drop. It’s the worst quarterly outlook since mid-2009, during the depths of the Great Recession.

In short, signs of the credit cycle turning are everywhere. Rates are rising. Appetite for risky debt is drying up. And the smart money is bracing for defaults.

This is bad news for people and companies with too much debt.

It’s also a problem for investors with exposure to “bad debt,” which, as I explained in the February 19 Dispatch, is on the rise.

• To prepare for when the cycle turns, I suggest you “look under the hood” of any corporate bond funds you own…

You can do this easily (and for free) on Morningstar. Just click the “portfolio” tab once you’ve found the fund you own. There you can see a breakdown of the bonds the fund owns.

Make sure that you have heavy allocations to “AAA/AA/A”-rated bonds, the safest kinds you can own. This simple step will help prevent you from having massive losses as the credit cycle reaches its tipping point.

Doug, you and your team keep setting the standard for informing others about what’s happening in the world and how to improve your position and protect yourself. Thanks for all you do.

Once again, Doug delivers an amazing analysis on the current state of social and political dystopia in today’s America. Like Doug, I believe there is going to be a hard landing. Unfortunately, most of the population will not only be oblivious to his insight but could not comprehend it if they were to read his brilliant treatise. Doug is truly a voice of truth in a world that prefers to hear something else.

Thanks for writing in, Gordon and Warren. We’re glad you appreciate our content and what we do here at Casey Research. Let us know your thoughts on today’s Dispatch (or a previous issue) at [email protected].

Thousands of readers showed up to hear what E.B. Tucker believes is the single best way to potentially make a small fortune this year.

Legendary speculator Doug Casey has used this method in the past to help him make millions. You can get all the details right here. 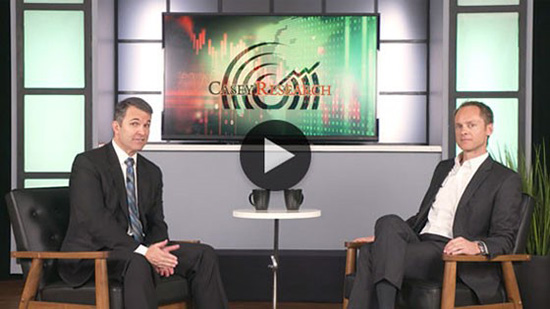