Italy’s debt market is sending us a message.

And investors worldwide should take notice. I say this because Italy’s problems could soon become your problems. Yes, I mean that even if you live thousands of miles away in the United States.

I’ll explain why in a second… But first, let’s look at what’s happening in Italy.

• Italian bonds are getting crushed…

You can see what I mean below. This chart shows the yield on the Italian 10-year government bond. 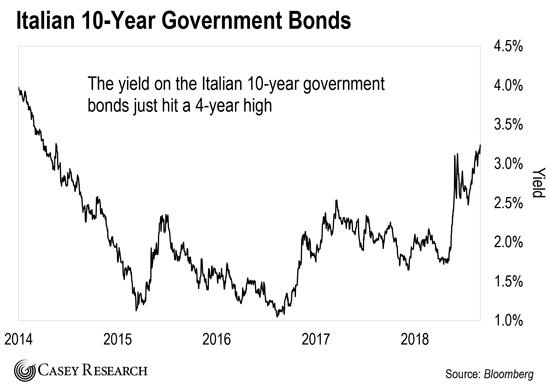 You can see that the yield has risen 152 basis points (88%) since June. That means these bonds are paying 1.5% more than they were just three months ago.

But it’s actually a problem. You see, the yield on a bond rises when the bond loses value. Italian bond yields are spiking because Italian bonds are crashing.

But why exactly? Well, it’s complicated. But let’s start with one of the biggest reasons…

• Italy’s finances are a wreck…

Just look at the country’s debt-to-GDP (gross domestic product) ratio. This metric measures how indebted a country is relative to its economy.

The lower the ratio, the better. But Italy’s debt-to-GDP ratio is anything but low. It sits around 130%. That’s the fourth-highest of any country in the entire euro zone.

It wants to spend even more. In fact, it’s talking about introducing a universal basic income. In other words, it wants to give away money to citizens for simply breathing.

It’s also talking about lowering the retirement age, which will bleed the country’s pension system even more. I could go on and on.

In other words, Italy is doing the exact opposite of what it should be doing. It’s spending more and digging itself into even more debt.

This is why Italian government bonds are tanking.

You can see what I mean below. This chart shows the performance of the FTSE Italia All-Share Banks Index since the beginning of the year. 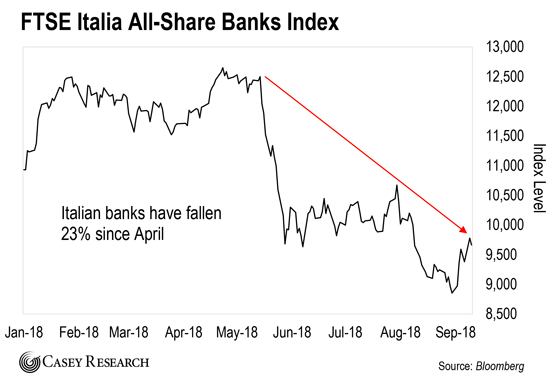 You can see that Italian banks have lost more than one-fifth of their value since April.

And it doesn’t look like the situation will improve anytime soon.

It shows Italy’s annual economic growth rate. You can see that Italy’s economy, as measured by GDP, has slowed in each of the last four quarters. 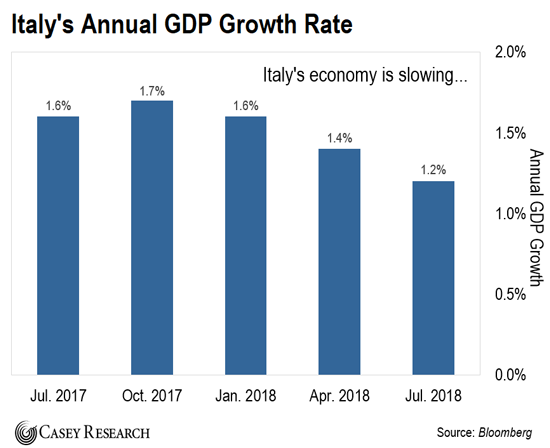 This is a problem. When an economy slows, everyday people and businesses have a tougher time paying off debts.

We could see a huge spike in loan defaults if this trend continues… And that could push Italy over the edge and into a full-blown banking crisis.

Now, I understand that may make me sound like a doom-and-gloomer. But I’m not the only investor who’s worried about Italy.

By now, you can see that the situation in Italy is quite serious. But you still might not care about what’s happening on the other side of the world.

• A crisis in Italy could end Europe as we know it…

I say this because Italy doesn’t use its own currency. It uses the euro, the currency of the European Union (EU).

That means Italy’s central bank can’t print its way out of this crisis. Only the European Central Bank (ECB) can create more euros out of thin air.

Nick Giambruno, editor and chief analyst of Crisis Investing, explains why this conflict of interest could soon come to a head:

Italy’s new government is on a collision course with the powers that be in the EU. Its spending plans are completely at odds with EU rules on deficits. And it’s already called on the ECB to forgive €250 billion [$296 billion] in Italian debt. The ECB owns €341 billion worth of Italian bonds, which it has been buying under its own version of QE [quantitative easing].

And Rome’s demands are going to get even more shrill. It knows a blowup of Italy’s €2.6 trillion debt pile would make the fallout from the Lehman Brothers’ collapse look like a picnic. And folks in Brussels understand all too well that this would be a mortal blow to the EU.

This puts the EU in a tough position. More from Nick:

The EU has a choice to make. It can accept Italy’s demands, and create a moral hazard that will eventually unravel the euro and the EU… or it can reject them, at which point Italy’s government will have no choice but to leave the euro. And if Italy leaves, it’s unlikely the whole project would survive.

Nick hasn’t just been warning his readers about the crisis brewing in Italy. He’s set up his readers to profit by shorting (betting against) two assets most exposed to a potential crisis in Italy.

You can learn about these opportunities by signing up for Nick’s Crisis Investing advisory right here.

I also you encourage you to read tomorrow’s Dispatch. In it, Nick and I will discuss what’s happening in Italy at greater length.

Could not agree more. “Politically correct” is a stupid term along with their “thinking.” All BS.

And another comments on E.B. Tucker’s recent piece: “Why the Government Doesn’t Want You to Have This Car”…

Mr. Tucker, if there were no Jeep, there would be no Land Rover. The original series 1 prototype was made of cobbled together Jeep parts, running gear mostly, as the Brits had no clue about four-wheel drive. You are correct about the diesel engine, however, with unreliable electrics, and Lucas (aka Prince of Darkness), engine reliability was not perfect. I will admit they are fun vehicles.

Join us for our first-ever Legacy Investment Summit from October 17–19, 2018, in Bermuda.

This is our largest conference ever and the speaker list will blow you away. If that’s not enough, the location is a true vacation destination with every amenity at your fingertips. 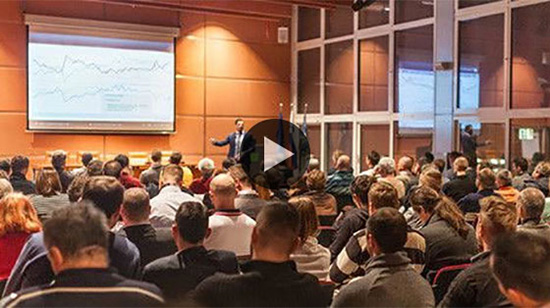