The bond market is flashing us a buy signal.

But not in the way you think. This signal isn’t telling us to buy bonds.

Instead, it’s telling us to buy stocks. I’ll explain how in a second. But first, let me say something…

This isn’t the sort of essay I typically write. It doesn’t focus on special, speculative opportunities like the legal marijuana market, cryptocurrencies, sports betting, or electric vehicles.

This essay’s all about the broad market. And I wrote it because most investors have the bulk of their wealth in index funds right now.

It’s important to take a step back and consider the broad market every now and then. Especially when it’s flashing a buy signal like the one we’re seeing today…

• Let’s start by looking at a chart… 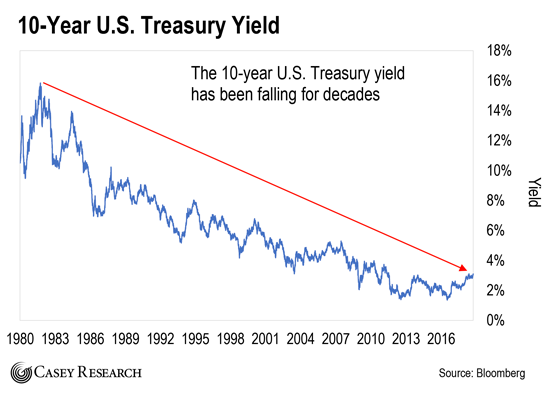 You can see the 10-year yield has been falling for decades.

That’s because we’ve been in a bond bull market for the last 37 years. And bond yields move inversely to bond prices. They fall when bond prices rise.

But notice what happened last month…

The yield on the 10-year Treasury jumped above 3%. In the process, it pierced a nearly four-decade-long downtrend in yields.

This reflects a major change in sentiment towards bonds. Specifically, it suggests that the 10-year Treasury will keep climbing.

But don’t take my word for it.

Gundlach, as you may know, is a world-class investor.

He oversees more than $100 billion at his investment firm DoubleLine Capital. He’s also one of the world’s leading bond experts. On Wall Street, he’s known as the new “Bond King.”

Gundlach also has a knack for nailing big calls.

For example, he predicted the bottom in Treasury yields back in July 2016. And that call has been absolutely spot on. 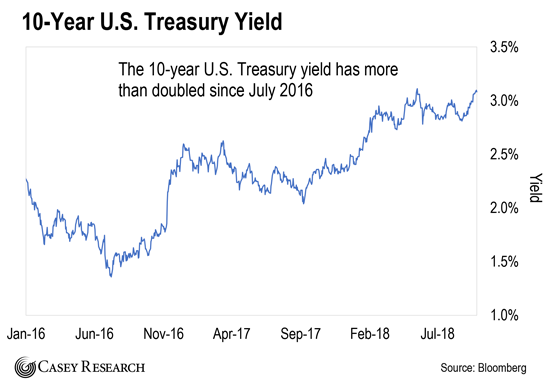 You can see that the 10-year Treasury yield has more than doubled since July 2016. That’s an enormous move.

But Gundlach thinks this will happen again. In fact, he told Reuters last month that his “6 percent by 2021 call is perfectly on track. No reason at all to change it.”

• This is clearly all bad news for bondholders…

But a big sell-off in Treasuries would also be bullish for stocks.

I say this because Treasuries are widely regarded as a safe haven. Investors take shelter in them when they’re nervous about the economy or stock market.

When investors are optimistic about the economy and stocks, they do the opposite. They get out of Treasuries and into riskier assets like stocks.

• In short, Treasury demand is a good measure of risk appetite…

And right now, this market is telling us that there’s more demand for riskier assets than safety.

Of course, that’s not the only reason I say this.

Just look at the chart below. It compares the performance of the iShares iBoxx $ High Yield Corporate Bond ETF (HYG) with the iShares 20+ Year Treasury Bond ETF (TLT).

HYG invests in high-yield corporate bonds, or what most people call “junk bonds.” TLT, on the other hand, holds long-dated Treasuries. 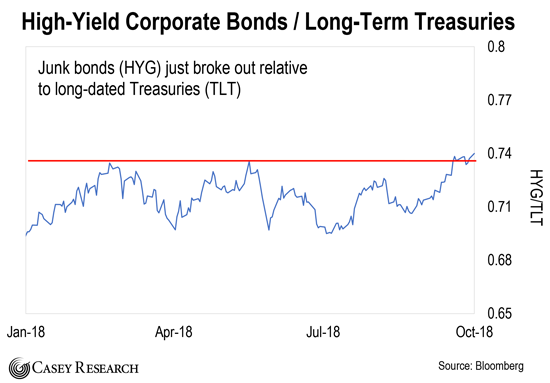 You can see that this line has been inching higher all year. Not only that, HYG just broke out relative to TLT.

This tells us that investors haven’t given up on bonds entirely. Instead, they’re favoring junk bonds, which have a similar risk profile to stocks.

In closing, the recent weakness in Treasuries isn’t a reason to panic. But it is a reason to stay long U.S. stocks… at least in the near term.

You may also want to use down days as opportunities to add to your favorite holdings.

So… what’s the solution? We talk, talk, talk about the problem, but no talk of a solution. Or is there a solution?

I read somewhere there is no problem too small that some branch of the government won’t step in and make it worse and more expensive. Boy howdy, is that an understatement!

Doug Casey believes in human evolution. Under this theory, man is clearly evolving towards collectivism. Human evolutionary theory states that it is a natural phenomenon. So what exactly is Mr. Casey railing against? Nature? Is Mr. Casey also upset about the behavior of frogs?

Nothing new here. Some people are on a mission and believe they have to tell others what to do or not to do. The prohibition of alcohol is one of the most infamous examples, though the movement against abortion is a very miserable one, too.

I believe that this overreach is in the heritage from the pioneers and the more modern attitude of individualism. The latter goes along with lack of respect. The demise of the family fabric is part of that downhill slide. Add drugs and firearms to the mix and we have a sick society. Some see the misery and develop the sense of a calling. That’s how oppression and dictatorships start, just ask Trump. 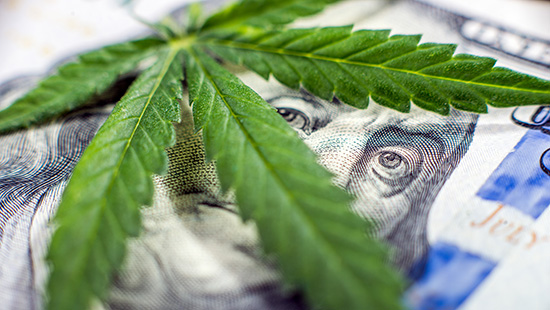